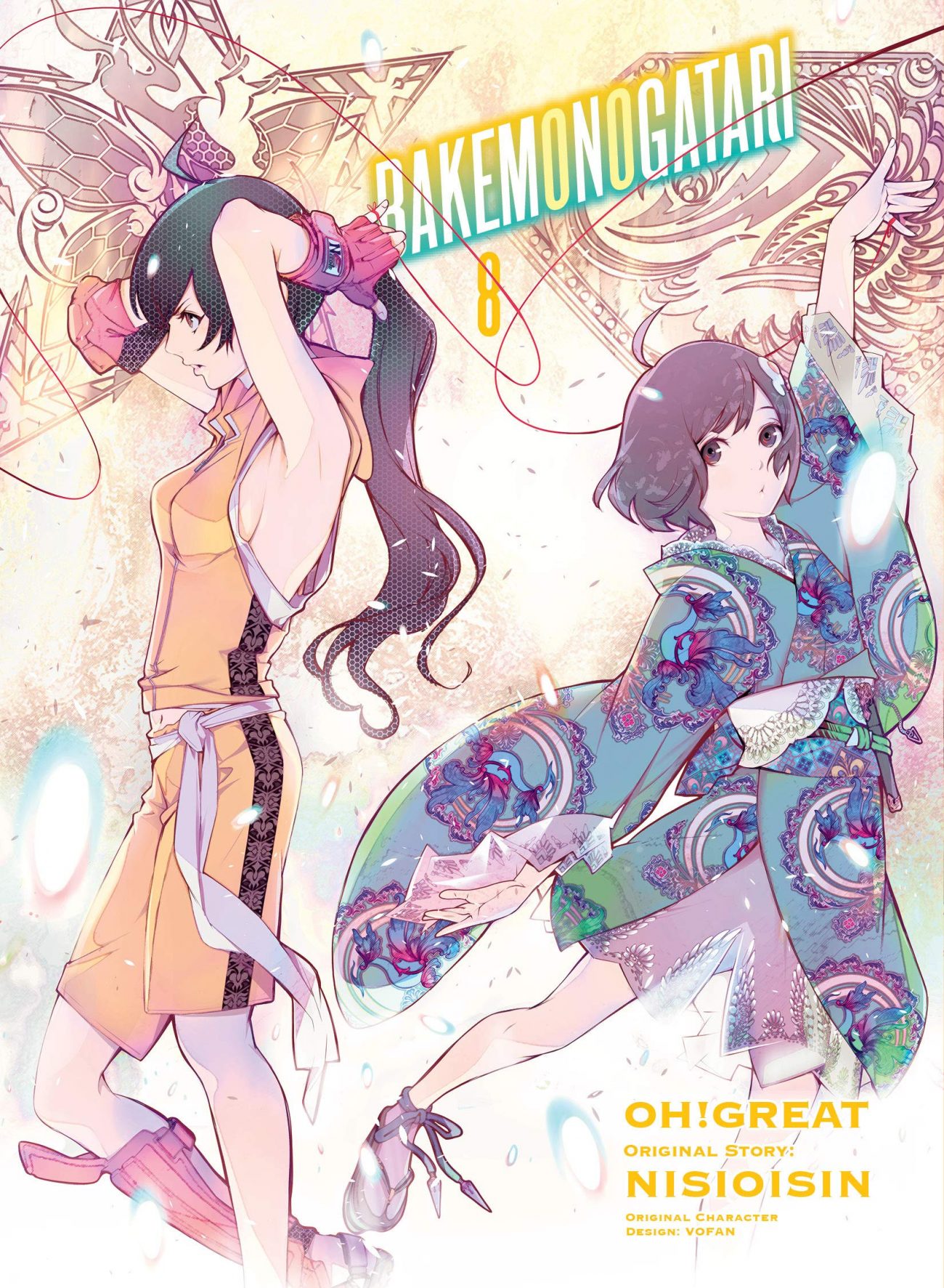 Even when dealing with the perversions of Nisioisin’s narrative, Oh!Great treats his story with as much care and detail as Michelangelo painted the Sistine Chapel. Every frame of his adaptation of Bakemonogatari is a marvel to look at. So much detail is placed into each page, that one could lose themselves in the visuals that he draws. In its eighth volume, not only does the art reach peak levels, but the narrative returns to form after some of the more uncomfortable moments in the seventh volume.

Koyomi continues to rid Sengoku of the snake aberration, realizing that there were two serpents coiled around her skin. With the aid of Suruga, the battles wages on as Koyomi is ripped to shreds by the ghosts the aberration calls into the mortal plane. After the fight is over, and Sengoku offers her gratitude, Koyomi flashes back to his first meeting with Shinobu, and how it forever changed his life.

An Oh!Great manga is more like a spectacle than a regular read, and Bakemonogatari is no exception. The fight scene between Koyomi and the snake aberration is perhaps the biggest visual highlight in the series thus far. The snake bites in his skin, the arm rotting off his body, and the way his head gets lopped off by the shogun samurai ghosts is presented with such beautifully grotesque detail. The icing on the cake is Suruga’s knockout punch, which contorts Koyomi’s face into a shape that not even Picasso could’ve imagined!

But within the beauty is the perverted humor of Nisioisin, which is captured hilarious during the first bit of Koyomi’s Shinobu flashback. As he walks past class President Tsubasa, a gust of wind blows her skirt up. What follows is six pages of “cultured” detail on the panties Tsubasa is wearing, with Oh!Great painting his canvas with some of the most sex-crazed imagery revolving around a pair of white panties. I may have complained about the perverted elements of the previous volume (for obvious reasons), but even I had to admit that this was a class act in the art of underwear humor!

We also see a much more big brother-y side of Koyomi when talking with Sengoku. Some of his actions with her may raise an eyebrow or two, but the way the two of them talk about the events, Doraemon movies, and the way Shinobu looked at her does have a good amount of heart to it. Granted, it doesn’t excuse his past comments and actions, but it shows that when he puts his heart ahead of what’s in his pants, that he could be a good guy when it counts. (His semi-possessed right hand, though, could use a broken finger or two.)

The latest volume of Bakemonogatari is a feat for the eyes, as well as the heart and funny bone when it counts. With Shinobu’s back story finally being revealed, readers will get to soon see why she is both Nisioisin and original artist VOFAN’s favorite character to write about. Until that time comes, be grateful that Oh!Great’s manga adaptation is no longer taking piss from its readers. Well, that is until Bakemonogatari starts to do it again!