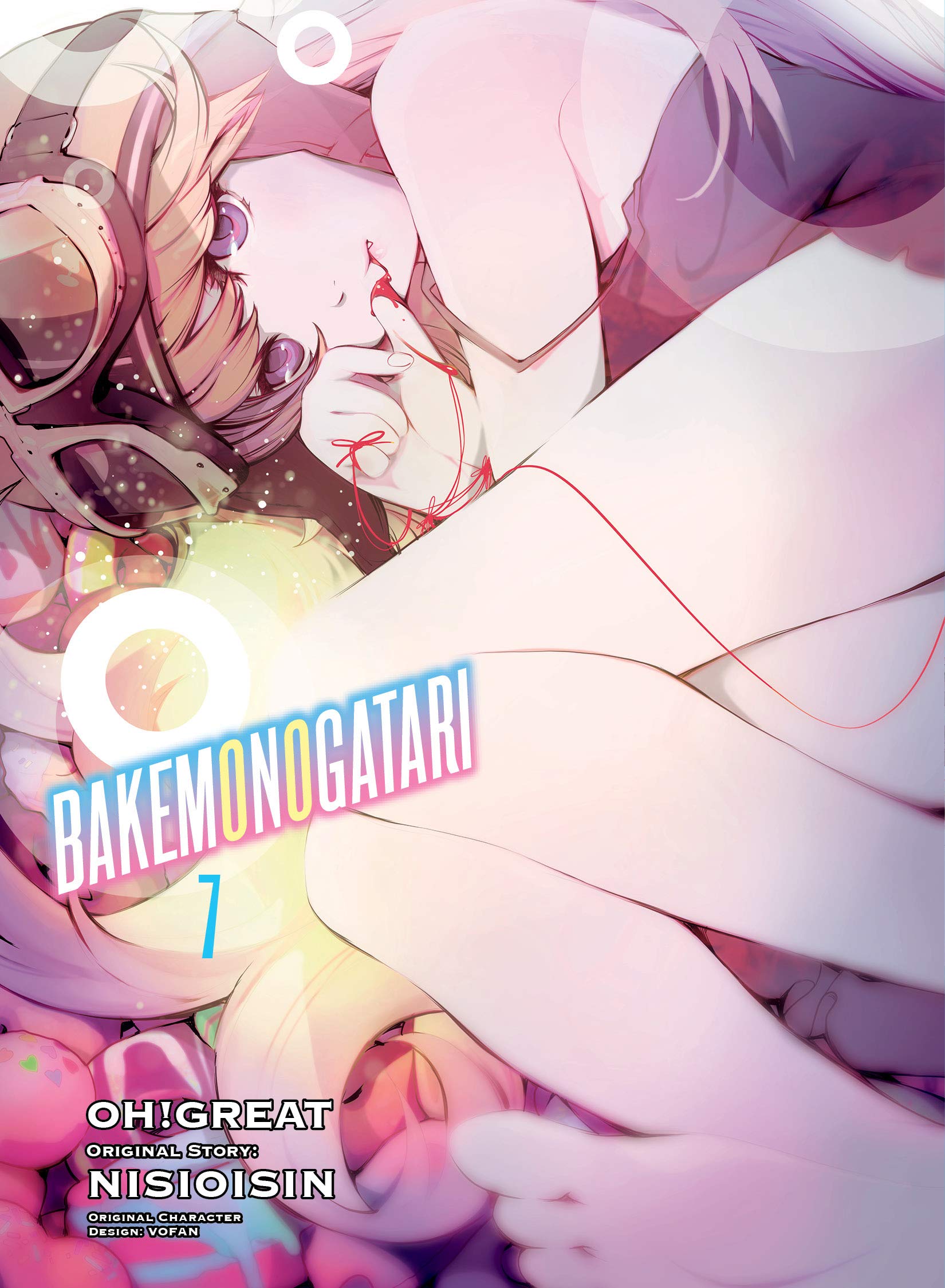 Every time I think I’m fully understanding Bakemonogatari, Nisioisin throws another chunk of confusing exposition into the mix. Perhaps it’s his way of screwing around with his audience, but sometimes it comes off as frustrating rather than funny. That frustration made up most of my emotions when reading the seventh volume of Oh!Great’s manga adaptation of Bakemonogatari, which raises some eyebrows in an unflattering manner.

After coming across a bunch of dead snakes near a shrine, Koyomi seeks out what may be a new aberration. The victim this time is a middle schooler named Nadeko Sengoku, whose curse is in the form of a snake. With scales wrapping around her body, Sengoku is in trouble of being suffocated. However, as easy it is to solve this certain curse, what’s truly disturbing is how the curse was placed on Sengoku in the first place.

One of the good things that this volume of Bakemonogatari does is detail why Koyomi is out there saving people from aberrations. As Oshino pointed out, Koyomi could’ve easily walked away from the whole situation after his first encounter. Instead, Koyomi charges in head-first to rescue every person affected. It’s not because he’s wants to be the white knight; rather, it’s due to the fact that he needs to be. After all, these aberrations wouldn’t be happening if it weren’t for him and the vampire girl Shinobu.

When Sengoku enters the picture, one can understand why Koyomi wants to personally save her. On top of her being his sister’s childhood friend, there doesn’t appear to be a bad bone in her body. Kindness and purity pour through her heart during her moments, which makes her aberration victimhood all the more confusing. However, as Oshino reveals the truth behind why she might be cursed, the pieces slowly fall into place as to why she needs to be rescued.

However, it often feels like Nisioisin is making the rules up of his world as he goes along. He can do what he pleases, but it makes reading Bakemonogatari feel like a chore at times rather than a delight. Sometimes I fully expect there to be a written test about every new tidbit that’s been thrown in, to the point where my brain begins to sweat from all the information that’s been placed in here. Fortunately, Oh!Great’s art style continues to be beautiful on every page, to the point where it cushions the more hard-to-follow areas of the narrative.

Once again, Suruga steals the spotlight from Koyomi whenever she enters a scene. Her quick wit and banter has gone from being way too detailed to blunt and hilarious. Suruga is straight-forward with what she wants in life, especially now since Koyomi helped her the last time. Now, she has grown into what may be the most likable character in the cast, and it has nothing to do with how good she looks in a swimsuit. (I swear, that’s not the case!)

Yet the reverse happens when it comes to knowing more about both Koyomi and Oshino. While they’re talking about helping Sengoku, their mentalities go down a path that’d make any sane person call the cops on them and force them into a certain registry. Their preferences are -- quite frankly -- gross, and it taints the charm and mystique that Bakemonogatari has to offer. (Honestly, I should’ve guessed this would happen from time-to-time, especially with how Koyomi treats Hachikuji.)

There’s a lot of good happening in Volume Seven of Bakemonogatari; it just has some character flaws that’ll make the average person gag. Nisioisin is a great storyteller, but he needs to tone down (or completely get rid of) Koyomi’s disturbing trends. Maybe Senjogahara needs to step in again and give him a good thwacking after he deals with Sengoku’s aberration. Then again, if this is just Nisioisin taking the piss, then he certainly deserves it by the bucketful, preferably with said bucket slammed over his head.