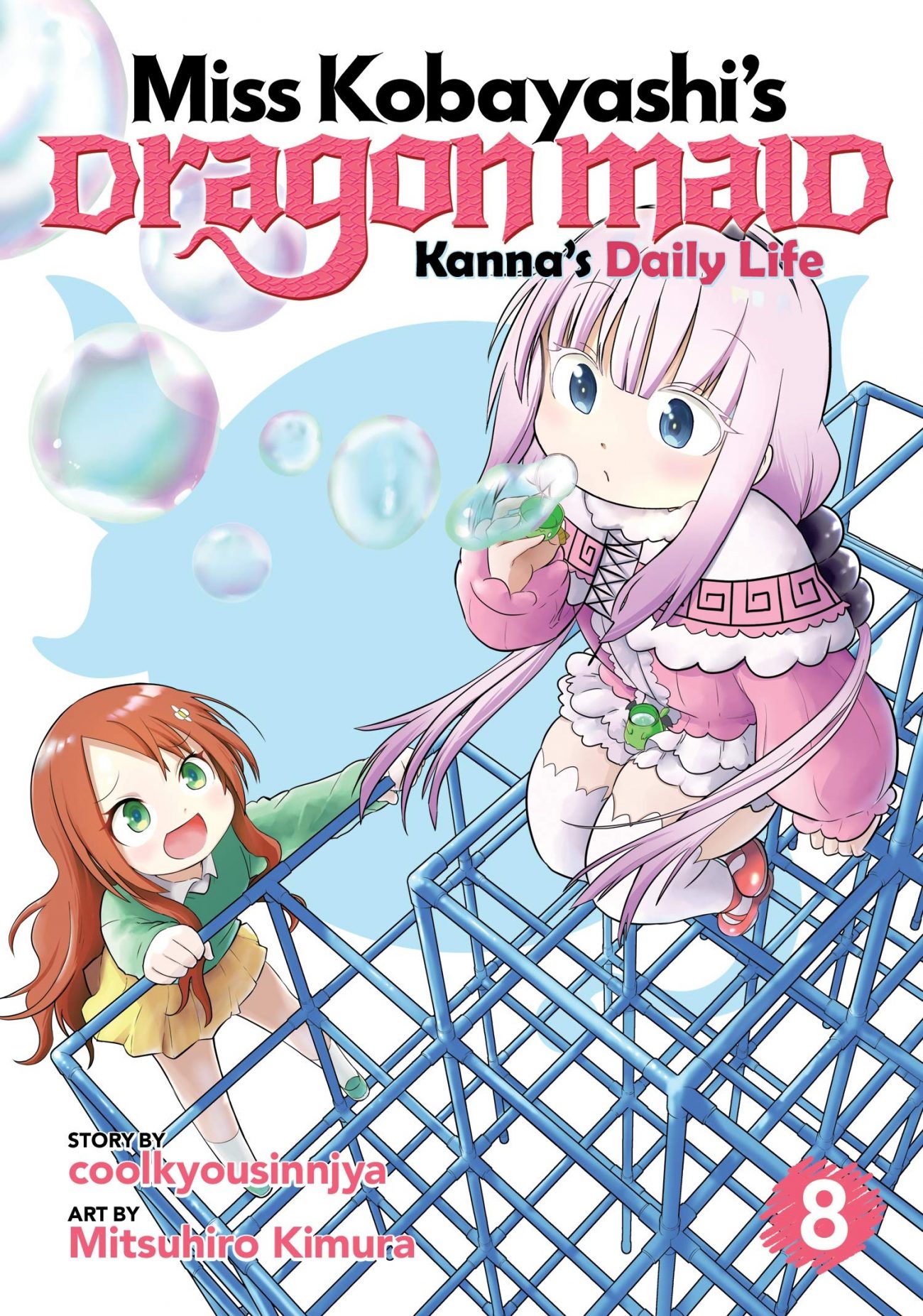 Although her entrance to the human world was one filled with greed, Kanna has become the epitome of kindness in the Miss Kobayashi’s Dragon Maid franchise. While her good nature is present in Coolkyousinnjya’s main series, it’s expanded far more in Mitsuhiro Kimura’s spinoff Kanna’s Daily Life. In its eighth volume, that heart isn’t just shown through her actions; it’s showcased through almost everyone who crosses her paths.

This volume of Kanna’s Daily Life has the smol dragon experiencing a bath house for the first time, as well as deal with her first school opening ceremony. Her knack of massages impresses Miss Kobayashi, while making Tohru somewhat jealous due to her hands-on approach. Meanwhile, the school puts on a play, with Kanna in charge of writing it. And what better source of inspiration than the people who live under her roof!

The silliness comes in strong when Kanna has her first public bath, with her and Ilulu having childlike fun in the water. Her mastering the art of the massage also has some good chuckles, as Miss Kobayashi realizes just how bad in shape she truly is. But it’s the school play narrative where the biggest laughs come in. Watching as the school kids insert the main story of Miss Kobayashi’s Dragon Maid in with the traditional story “The Gratitude of the Crane” will bring to mind the Christmas play from the original, only with Tohru and Kobayashi feeling more embarrassed over what’s happening onstage.

But it’s also here where Kanna’s nobleness is in full swing. On top of her paying tribute to her dad towards the end, the end demonstrates how grateful she is to have Kobayashi, Tohru, and Ilulu in her life. We also see this kindness rub off on Saikawa, who lends a hand to her sister Georgie after she hurts her ankle. There’s also the demonstration of friends working together to create something beautiful, as Kanna, Tohru, and Ilulu craft dragon bead art with a big dose of love and brain power.

Kanna’s Daily Life has had its ups and downs, but Volume Eight demonstrates the sweetness that the Miss Kobayashi’s Dragon Maid universe delivers. The cuteness comes as fast as the laughs, and will leave any lover of the series feeling warm and fuzzy afterwards. With its heart on full display, Kanna’s Daily Life demonstrates why there will be guaranteed smiles when the Lolita dragon is around!