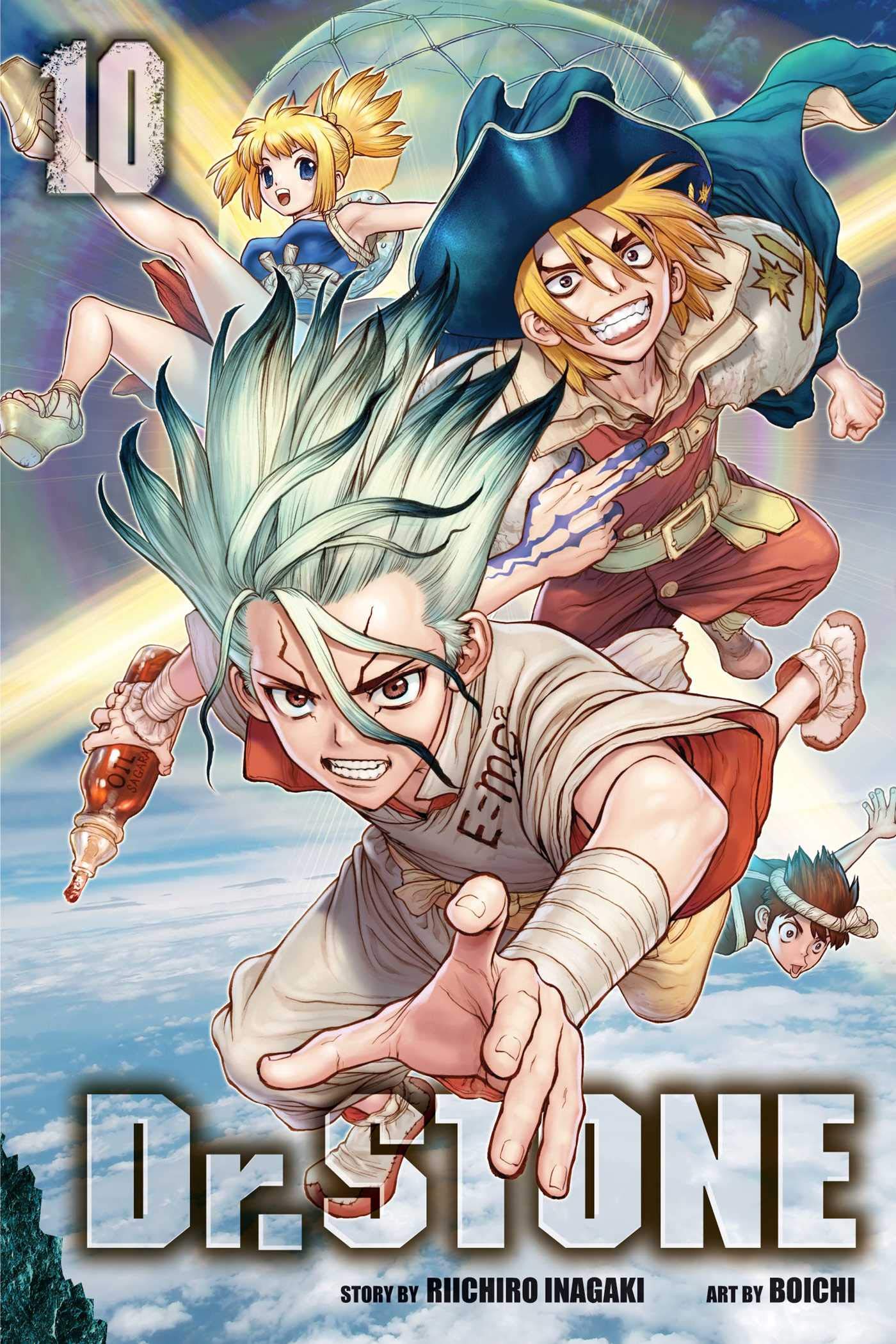 The Stone Wars has officially reached its end in Dr. STONE. As the battle between brains and might concludes, it was apparent right from the get-go who would stand triumphantly. Who would’ve guess that there’d be a way for both sides to gain a victory, as Senku and Tsukasa face off against a common enemy by the ninth volume’s end. With its tenth volume, Dr. STONE leads readers towards the next stage of human reawakening: traveling the world.

Now that Senku and Tsukasa have made amends, the Kingdom of Science moves on with its fight to revive everyone still trapped in statue mode. But after a wound leaves him close to death, Tsukasa counts on Senku to find a cure before time runs out. What Senku comes up with is on the verge of science fiction, but not out of the realm of possibility. With little sister Mirai looking out for Tsukasa in his time of need, it’s now up to Senku to see not just the reason behind human’s petrification, but its origin spot. 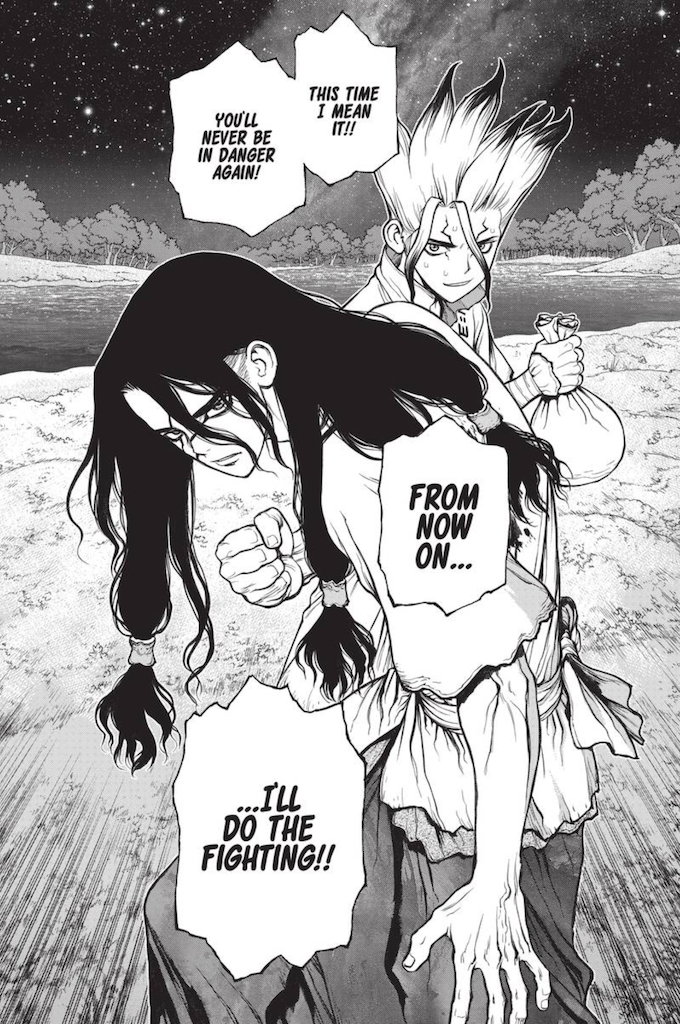 This leads to the Kingdom of Science to build new machines, this time for taking on the sea and air. However, a ship needs a captain, leading to Senku to reawaken a rich sailing hobbyist in the form of Ryusu. His arrival not only brings back some level of capitalist greed, but the return of a form of currency. While this goes against greatly with what Tsukasa was fighting for, Ryusu somehow adds a new layer to the team, one that’s surprisingly filled with much comedy.

Ryusu’s addition leads the residents of Ishigami Village to get a new sense of money. Food like ramen & cotton candy and clothes crafted by Yuzuriha start selling for good green, resulting in even the rich kid’s need to spend spend spend! The evil cackling that Senku and Gen do over the sheer love of cash will make any reader laugh alongside it. In a strange way, it showcases the one very small good thing that capitalism can lead to: creative ideas coming to life. 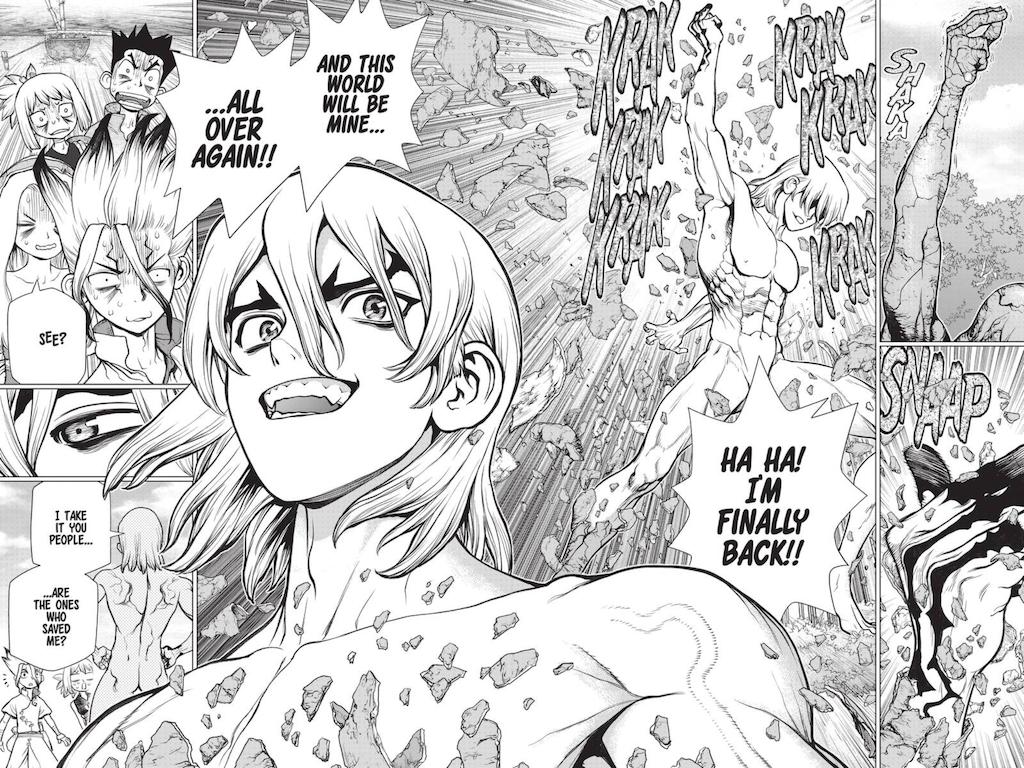 As such, Senku’s quest for ships, hot air balloons, and some Texas-grade oil leads him closer to his goal to find the source of the petrification. The inventions seems to come to fruition much quicker than most of the other ideas, but that’s because the villagers of Ishigami are now running with Senku’s ebb & flow. They’re now used to this sort of work load, meaning a process like making hot-air balloons with hemp comes off far easier than the more complicated process of making cell phones. But in its own way, it still comes off as a beaut to watch unfold.

Dr. STONE’s transition from the Stone Wars to the new arc isn’t exactly a smooth one, but it gets it groove back quickly once Riichiro Inagaki ironed out the last few bits of the last storyline. With the aid of the gorgeous art style from BOICHI (who also finds a way to draw himself in to Senku’s world), the new arc aims big in the sense of the lengths it wishes to travel. It won’t be long to see where this new journey will take Senku and company, but Dr. STONE has been able to pull out one big surprise after another. Here’s hoping what lies ahead of the horizon will be an eye-opener for its readers. 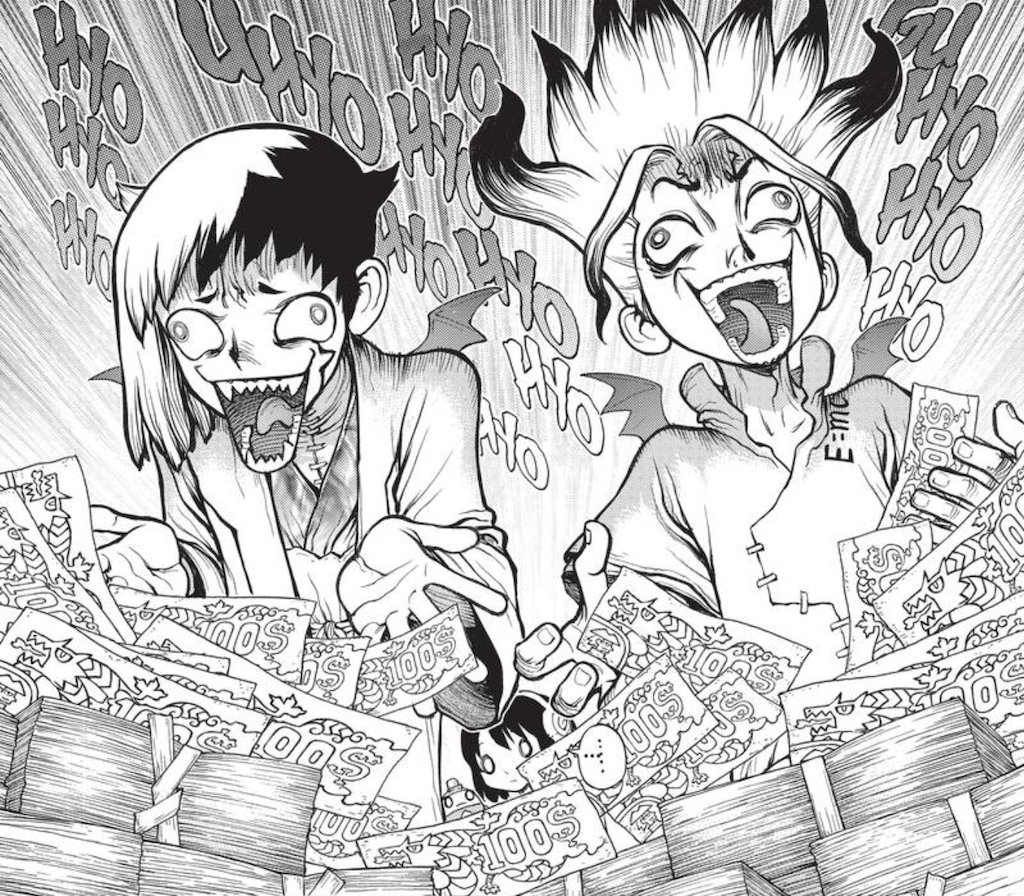