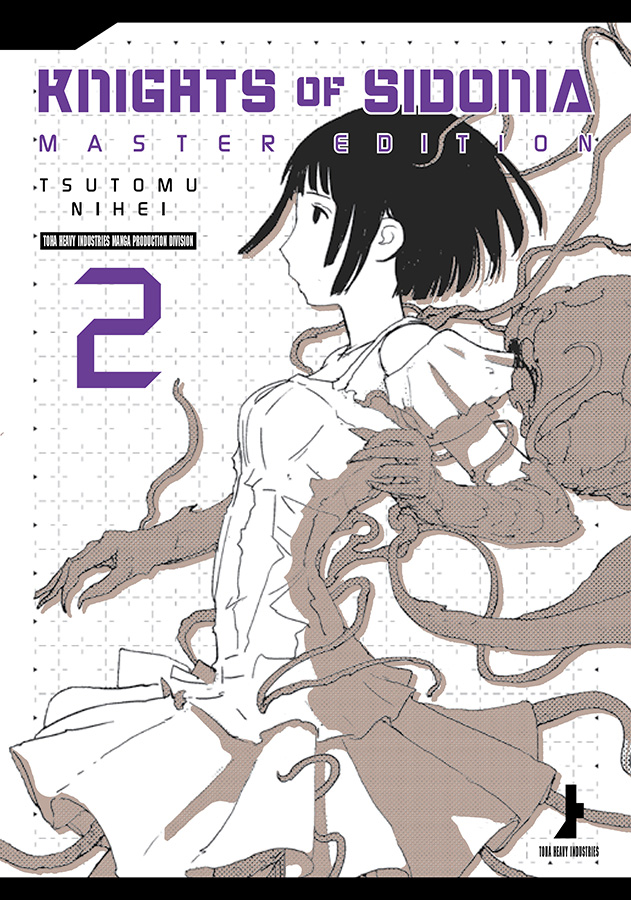 Can a manga with a very confusing plot still find a way to be a good read? I found myself asking this question as I turned the final page of the massive Master Edition of Knights of Sidonia’s second volume. Many times I tried to make heads or tails over what I had just read, with some parts seemingly making more confused the more I thought about it. Despite getting over some of its less-than-original aspects, Tsutomu Nihei’s massive space opera can be quite the brain-wracker. But does it manage to entertain?

The second Master Edition volume of Knights of Sidonia collects Chapters 12-23 into its giant publication. As the war wages on against the Gauna, more information on how to defeat them slowly starts to leak through. Meanwhile Nagate tries to get along better with Izana, all the while a seemingly romantic interest starts to blossom within her and even pilot-in-training Yuhata. While all of this is going on, the Gauna placenta that’s taken the form of the fallen Shizuka begins to act like the deceased pilot, bringing confusing to the staff and team.

Even as I typed that scenario out, I feel my head start to spin. There are layers upon layers of plot, back story, and character development that is showcased throughout Knights of Sidonia. The main problem is how it’s presented. Sometimes there’s zero explanation, and other times there’s too much thrown at you to swallow in one sitting. And perhaps that’s where I have the biggest issue with this series: it knows it’s smart, but the way it demonstrated its intelligence will leave the Average Joes of the world in the dust.

What saves it this time around is the amount of humor placed in the storyline, especially when it involves the character of Izana. Her hangouts with Nagate and Yuhata result in mishaps ranging from hot springs shenanigans to even a fishing slip-up gone horribly wrong. One of the better running gags starts up when she’s given a prosthetic arm & leg after an accident, bringing way to situations where she can’t control the level of her strength. These incidents give way to a nice break for the brain, especially after some of the more fringe science-y explanations.

The art in this collection has thankfully improved over the previous volume. What was once plain-looking areas and people are now better-detailed worlds and mechanics with some decent changes in character models. With that being said, the humans of Knights of Sidonia still suffer from Same Face Syndrome, to the point where I had to go back a few pages each time to see who is being focused on at the moment. It’s only when a person loses an appendage or two when I can finally figure out who’s currently being featured. (Thank you Izana for your sacrifice!)

Knights of Sidonia still has its problems when it comes to explaining its own narrative, but the characters are becoming more likable and relatable as the story progresses. With a couple of nice twists thrown in towards the end of this Master Edition collection, there is bound to be more questions coming our way as more info on the Gauna reveals itself. Nihei’s space opera may be a confusing read at times, but it nevertheless knows how to somewhat entertain even those who don’t have a Master’s Degree at an Ivy League university.