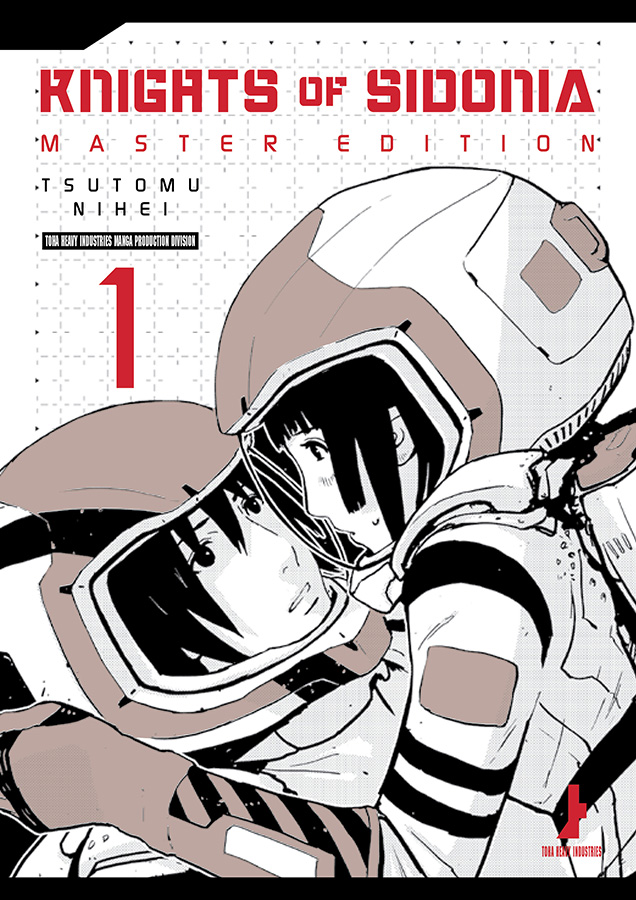 Space operas can have a hard time pulling off something imaginative these days. It would seem that just about everything from the dramatic to the comedic aspects of this genre has been visited and revisited in some form. From the likes of Leiji Matsumoto and George Lucas to Shinichiro Watanabe and Luc Besson, these pioneers in space adventures have seemingly turned over every rock and searched through every crater for roughly any hint of originality to place into their tales. Because of this, I kind of feel bad for Tsutomu Nihei and his work Knights of Sidonia.

Taking place during the 34th century, Knights of Sidonia focuses on the last remaining human settlement. Earth has been destroyed by an alien race known as the Gauna, with much of the newer population being made via cloning and asexual reproduction. A Garde pilot named Nagate Tanikaze, after emerging from the surface below, finds himself having trouble fitting into his new surroundings, especially with his lack of genetic treatment that allows others to giant nutrients via photosynthesis. Thankfully, he finds a comrade-in-arms in the form of Shizuka Hoshijiro, as the pair often team up to take down the Gauna and destroy its "placenta".

Stories like this can be tough to pull off without finding some other work of fiction to compare it to. Back-and-forth while reading this first Master Edition volume, it was hard to not think of Neon Genesis Evangelion as the narrative went on. Both deal with mysterious alien-like beings, as well as a protagonist that's...not entirely good at his job. As such, Nagate's actions and mentality make him quite the hard guy to root for during his missions. (At least he hasn't performed a questionable act over someone's comatose body...yet.) 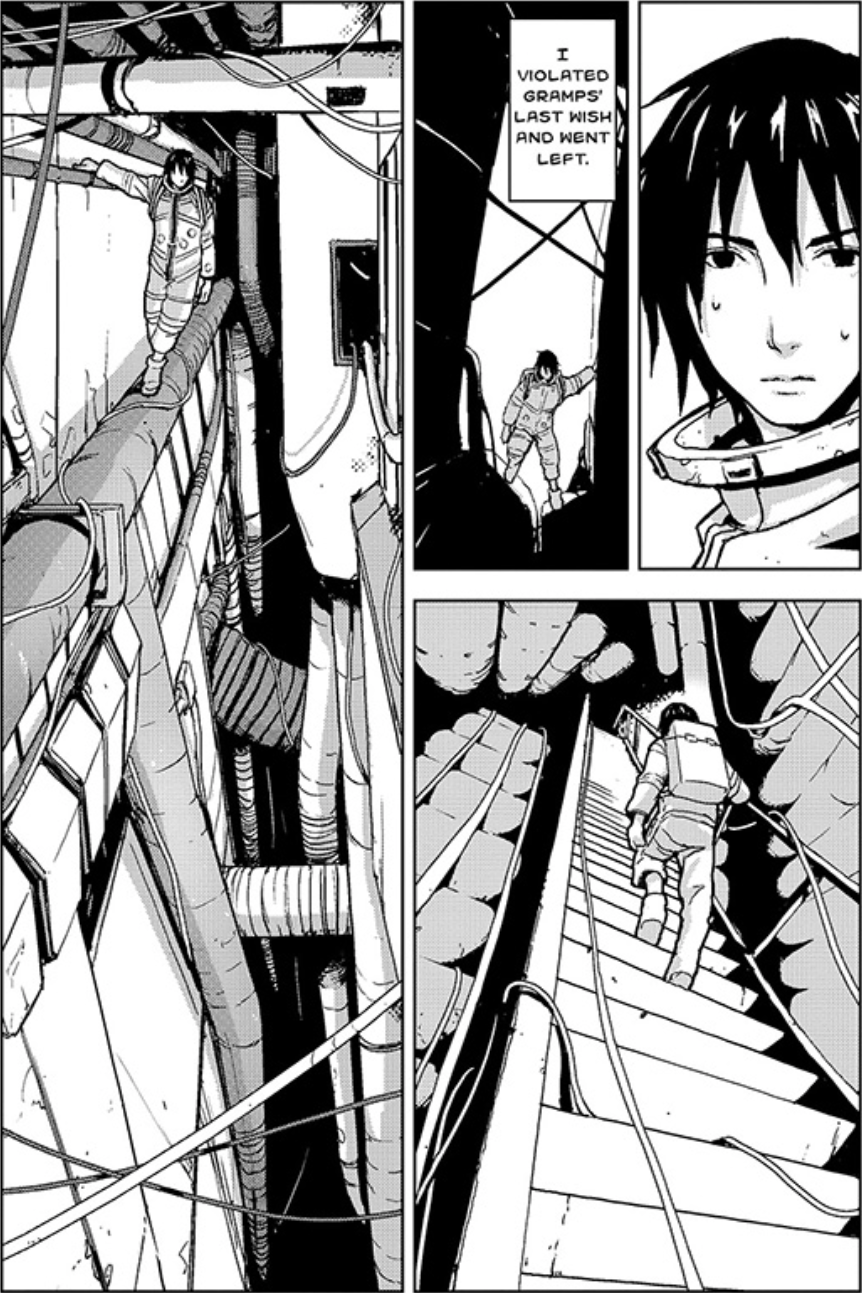 From a narrative perspective, Knights of Sidonia can be all over the place. Jumping from one incident to the next without some sort of ebb & flow makes it kind of hard to follow in places. Critical moments -- especially one involving Shizuka -- sometimes happen off-screen, with no explanation given as to what happened. Though the action can be pretty exciting at times, it's hard to enjoy it when things often feel confusing. Because of this, it's often difficult to grasp most of the characters and build a connection to them.

There is one chapter that does stand out though, one involving Nagate and Shizuka drifting in space. Although most of the tale focuses primarily on their survival, there are these little nonchalant moments that demonstrate some sort of unique humanity and bonding that helps them to shine more than the other characters. They talk, they joke, and they do what they can to live onto the next day until their rescue. While it can be reminiscent of the Alfonso Cuarón film Gravity or even Ron Howard's Apollo 13 adaptation, it somehow manages to deliver a certain amount of warmth the series was lacking up until that point.

One thing I can give Nihei credit for is his ability to build worlds. Although there have been very similar settings in past works, how Nihei has brought Sidonia to life can be breathtaking at times. The buildings, the enemy Gauna, and even the blackness of space are captured in such a way that boost how ginormous of a realm Knights of Sidonia takes place in. Even seeing some out-of-nowhere characters like a talking space bear with a robotic hand manage to fit well into the many crevices and areas that are showcased. 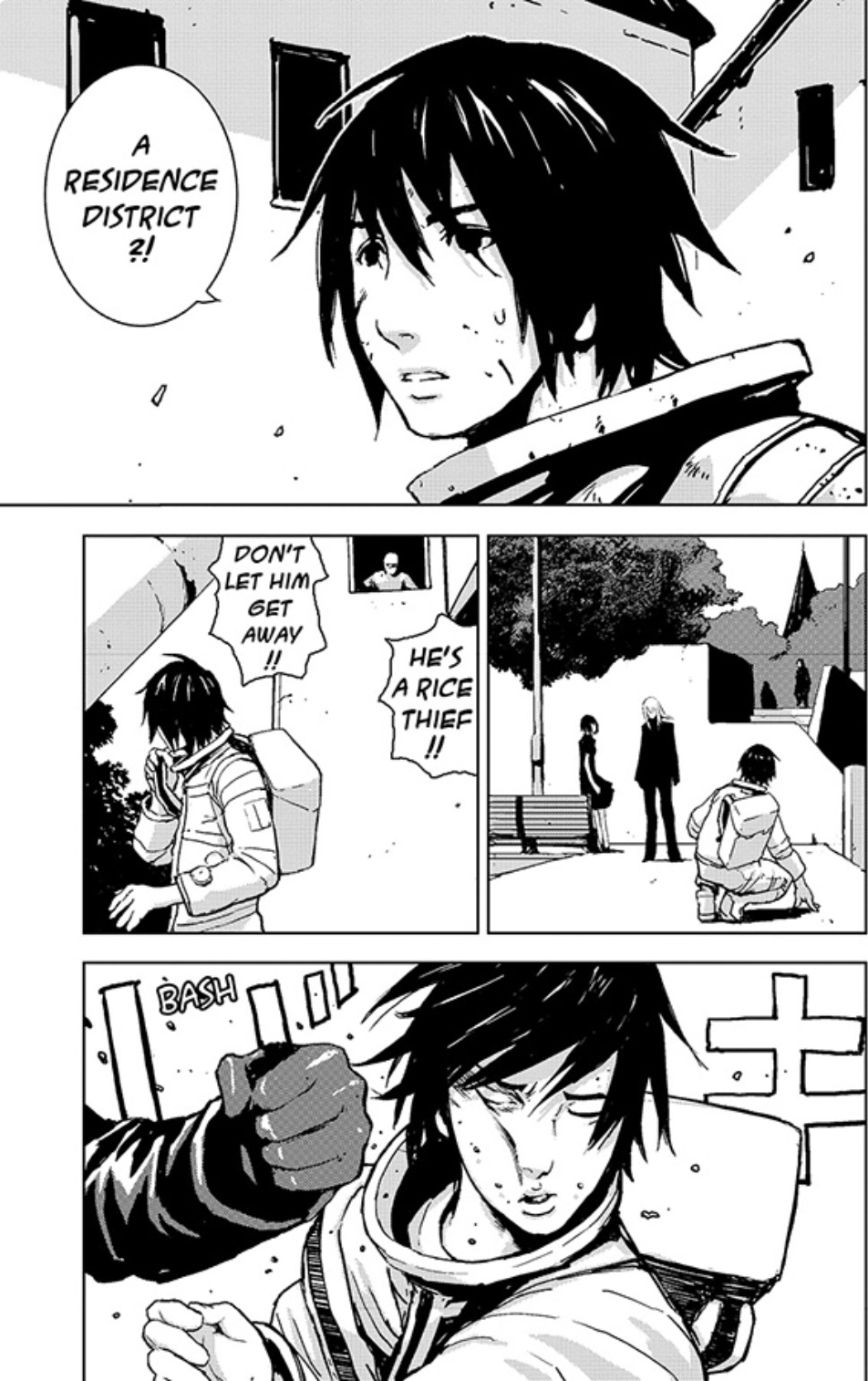 With that being said, having this manga released in this massive Master Edition has a bit of a disadvantage art-wise. One of the big problem's with Nihei's style is the fact that the characters can often suffer from what I like to call "same face syndrome". This would be something a reader wouldn't notice in a normal-sized manga book, but here in this Master Edition, it's too easy to catch these flaws. On top of that, these characters have Plain Jane characteristics that does very little to help the characters stand out from other works. They may look fine for the most part, but readers will be bound to forget about their appearances by the time they move onto another manga series.

Knights of Sidonia can be pretty interesting, if not for the fact that most of what happens has been done before by other writers. Yes, it can be entertaining to read at times, and it does show that it can be pretty intelligent with its ideas and concepts. However, this first Master Edition volume merely showcases Nihei's ability to take other people's concepts and replicate them in an okay fashion. It's not bad per se, but Knights of Sidonia doesn't quite stand toe-to-toe with the many iconic works that are fighting for one's attention.