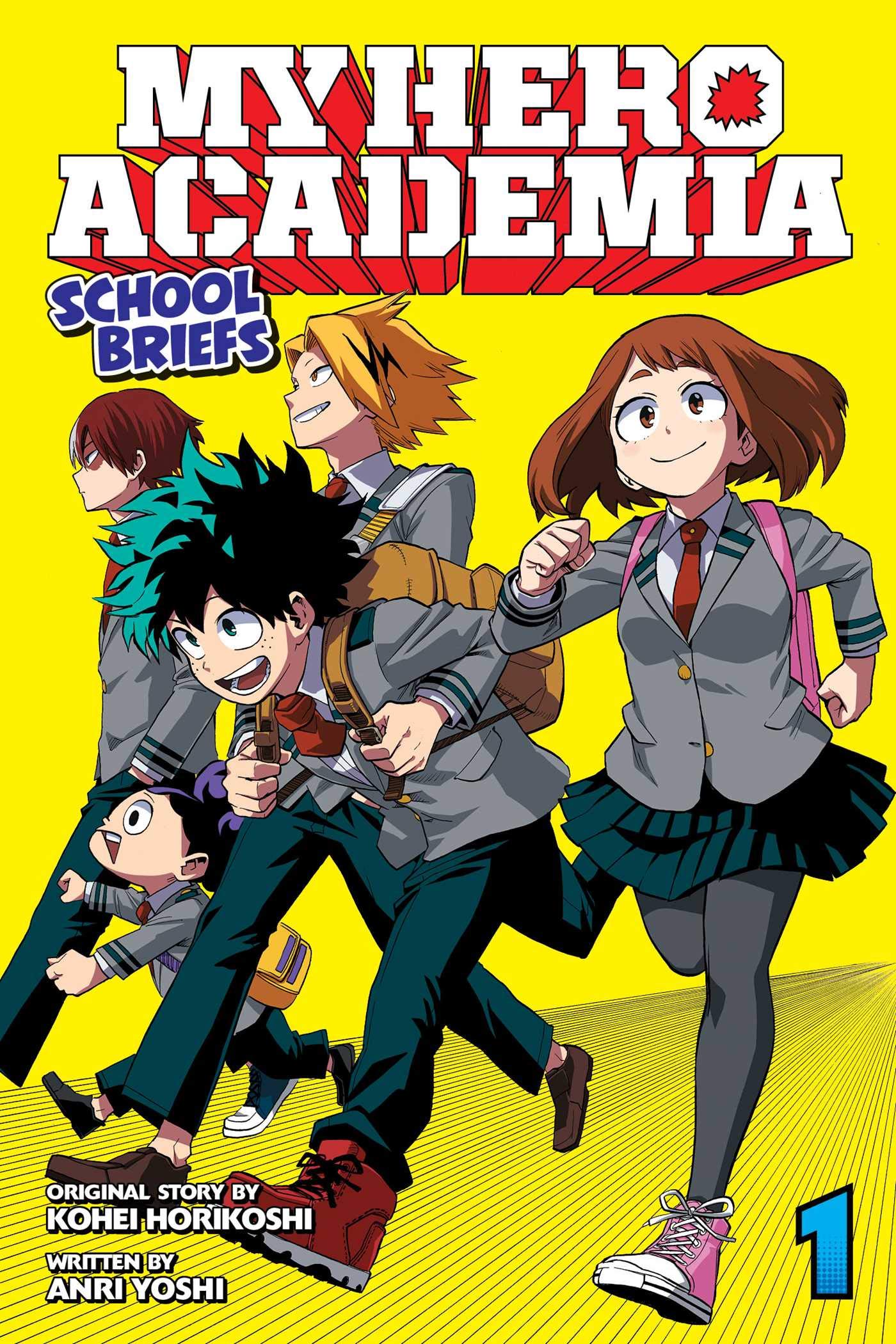 When I was a kid, I fondly looked forward to when my class would get those Scholastic mini-catalogs. In these catalogs, classics like Goosebumps and Animorphs would often be paired up with kid-friendly light-novel tie-ins to such films as Ace Ventura and Clueless. My Hero Academia: School Briefs reminds me greatly of these books, as it takes a beloved property and brings about a side-story of sorts that's great for the schoolyard crowd. And in a way, it does so without having to tone down too much of the more risqué elements of the series.

Taking place sometime after the Stain incident, the first volume of School Briefs puts a spotlight on what happens when the students of U.A. High School aren't ready to don their capes and superhero vigor. Parent's Day is coming up, with Midoriya, Bakugo, Tsuyu, and the rest of the crew having to write a letter to their parents to show their appreciation. While these students ponder their words, they embark on some run-of-the-mill activities, albeit with some interesting setbacks keeping them from purely taking it easy.

Adapting Kohei Horikoshi's original series, Anri Yoshi finds a way to keep the spirit of both the manga and anime in check via written word. As the series brims with such personality, fans will have zero issue with picturing in their minds the on-point visuals that are described throughout the book. From Ida and Todoroki's trip to the amusement park to Uraraka attempting to buy groceries on a budget, everything is captured with the right amount of humor and style that My Hero Academia is known for.

One of the highlights of School Briefs is a discussion between the school staff on how they'd be such great villains. Hearing Present Mic, Midnight, and Ectoplasm chat about how they'd capture hostages brings up some interesting what-if scenarios that demonstrate why it's a good thing they're on the Hero side of the story. As Aizawa does his best to ignore the fluff coming out of his peers' mouths, the situations suddenly turn to using Quirks for pranks as a kid, resulting in some humorous visuals. (Midnight playing "doctor" as a kid brings the biggest laughs, giving way to how she may have always been the R-rated type even as a young tyke.)

Considering this book appeals to a younger demographic, it gets away with a lot. Mineta and Kaminari brag in-depth about women's breasts & bodies as they attempt to score a date at the theme park, whereas Bakugo drops a couple of "shits" here and there when on a rescue rampage. However, as the Japanese mentality towards certain content gives kids over there much more breathing room as to what's appropriate, it's easy to see why this book contains content that more teen-friendly in America. (Perhaps it's time our country learns a thing or two about loosening the bars of what's okay for kids and the like.)

Since it takes a more slice-of-life approach, one cannot walk into this My Hero Academia story without knowing it being light of its trademark action. Not until you get to the final chapter does a throwdown of sorts occur, with all of the students banding together to defeat a common threat. Thankfully, the S.O.L. moments has some heroic things sprinkled throughout to make it seem more align with Horikoshi's series, such as Ururaka taking down a panty thief or Todoroki aiding with finding a missing girl & reuniting her with her mother.

The first volume of My Hero Academia: School Briefs may require the use of imagination, but its story and character banters make it easy to picture what's happening. Despite some of its more "mature" content, Yoshi brings about a fun and (somewhat) kid-friendly take on Deku, Froppy, and Lord Explosion Murder's day-in-the-life shenanigans. It may not go full Plus Ultra, but School Briefs does deliver a Texas Smash level of enjoyment that fans of My Hero Academia will no doubt get a kick out of immensely.