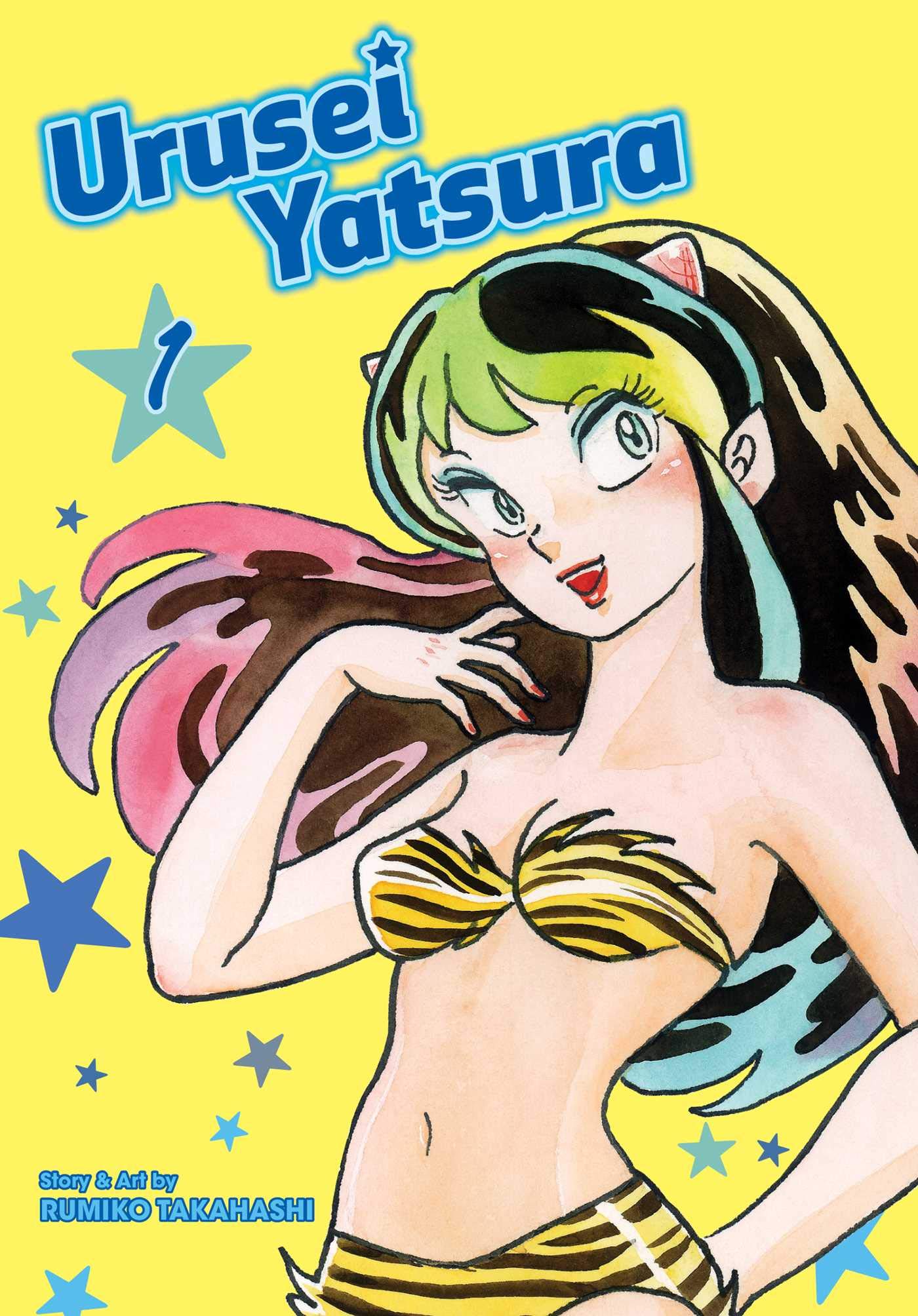 41 years ago, a new face in the manga realm emerged with her debut title. This series would spawn anime, movies, and a plethora of merchandise & video games; it would also become one of the most beloved series of all-time. That author was future Eisner Hall-of-Famer Rumiko Takahashi, and the series she debuted with was Urusei Yatsura. Now for the first time ever, the wacky and wild crew that Takahashi unleashed in Japan has been brought to America completely uncut by VIZ Media. However, a question remains: has Urusei Yatsura aged well?

The first volume of Urusei Yatsura (which consists of the first two Japanese tankōban volumes) places its main focus on Ataru Moroboshi, who may be the (un)luckiest boy living in Japan. Despite being bombarded by one bad incident after another, he still manages to keep a smile on his face and a girl by his side. Ataru's world is flipped upside-down when the fate of the world is placed on him by invaders from space. In order to save the world, he must capture the beautiful alien princess Lum and touch her horns. However, after he succeeds, Lum finds herself wanting to stay put, making Ataru's life more hellish than heavenly. 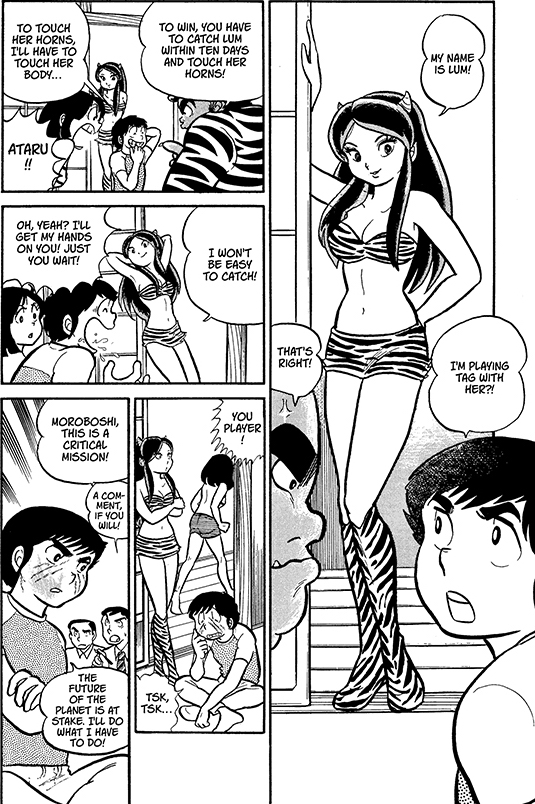 Always thinking with what's in his pants rather than what's surrounding his mind, Ataru constantly gets in trouble with Lum, his schoolgirl crush Shinobu, and even his classmates and family. Perhaps even worse is when other women enter his life to make his thought process difficult, from the priestess Sakura and the snow spirit Oyuki to the troublesome crow goblin Princess Kurama. All Ataru wants is a normal day in this crazy life of his. Sadly, that does not look to be in the cards for him.

Takahashi's style of perverted humor is on full display in Urusei Yatsura, but as this was her first series, one can see that it's not quite finely tuned yet. The first few chapters has its fair share of bumps and cracks, with its ecchi-based gags and physical humor not quite hitting their mark. While revolutionary at the time, what Takahashi has cranked out of her mind since then like Ranma ½ and even Inuyasha showcases far better comedy than her early works. With that being said, readers can tell that her early craftwork gets better as the chapters progress, especially when entering the second half of this volume. 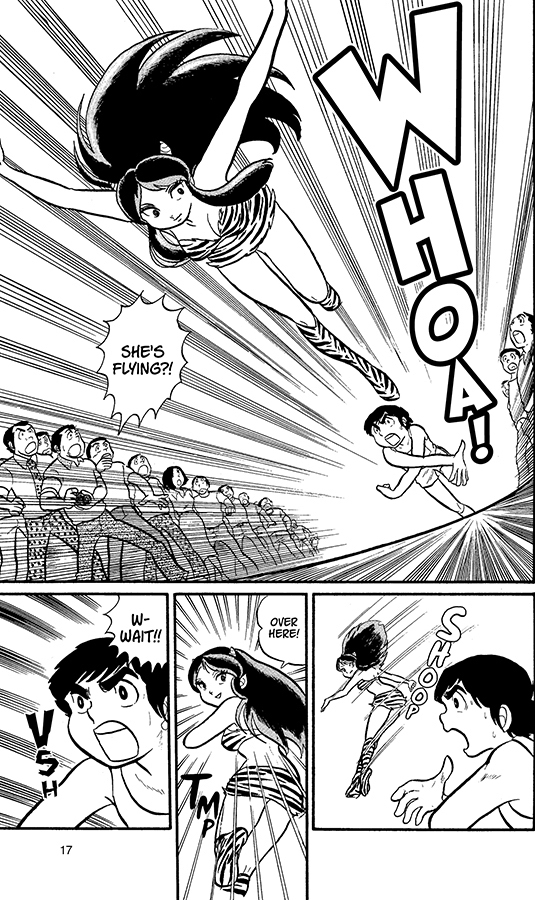 The first half has some good moments, such as when Ataru participates in an oni-filled beanbag tossing contest and when his mother becomes infatuated with Lum's ex-fiancé Rei. But all of that is pushed to the curb when you have Ataru dealing with snow women, kappa leaders, and crow goblins & their sexy princess. The nuttiness that our protagonist deals with in these later chapters are on-par with some of today's more perverted comedies, with his libido taking full control of his mind for better or worse. Yes, such actions should be shunned in the real modern world, but at least he gets the crap punished out of him every time!

Even when it's not trying to be naughty, Urusei Yatsura has no problem with being funny. A chapter surrounding Lum's powers being blocked by a magic ribbon places the space princess at the butt of the jokes this time around, as her attempts to zap people or fly are met with humorous confusion on her part. It gets to the point where Ataru's classmates start to worry for her safety, albeit with their own naughty reasons behind their actions. All of this ends with a good laugh at Ataru's expense, with him feeling as much pain in two pages as Lum does in the other 20. 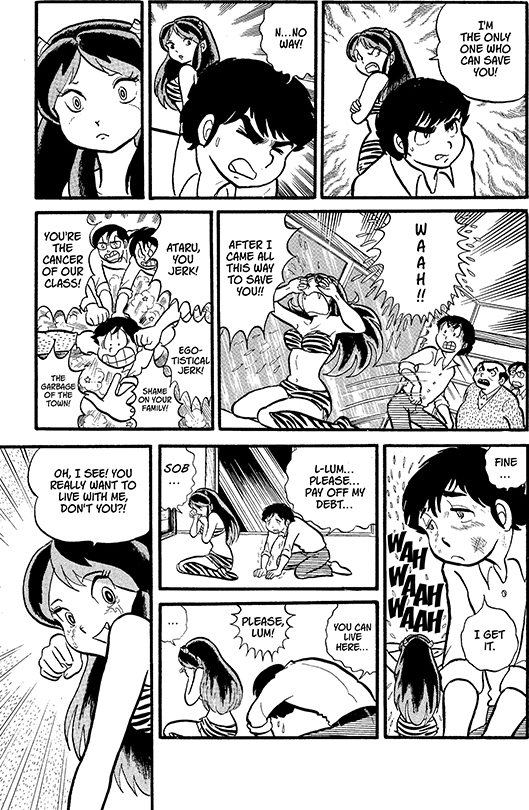 From an artistic standpoint, Takahashi already demonstrate a lot of talent in her first work. While the scenery isn't always perfect (this was the 1970s, after all), it's the characters that have the most attention to detail placed on. Lum, Shinobu, and the ladies of Urusei Yatsura are presented with very ravishing visuals and styles. Meanwhile the boys -- especially Ataru -- have a much more cartoonish appeal to them, as they seemingly are portrayed to look more like the perverted monkeys that they truly are.

A great bonus in this collection is the Rumic Star Specials that tail-end the end of each respective volume. Written by Keiko Sugimori, these sections dive deep into the town and people that reside within this series. Despite it being a fictional place, Tomobiki Town's history and lifestyle is presented in such a way that makes it seem like an area that anyone can visit. A piece on the character puts a spotlight on her wealth, despite the fact that she seems to be quite the frugal person. One other interesting thing in this collection is an afterthought from Takahashi herself, with a fresher drawing of Lum that makes her look more like Kagome from Inuyasha than any space ogre princess. 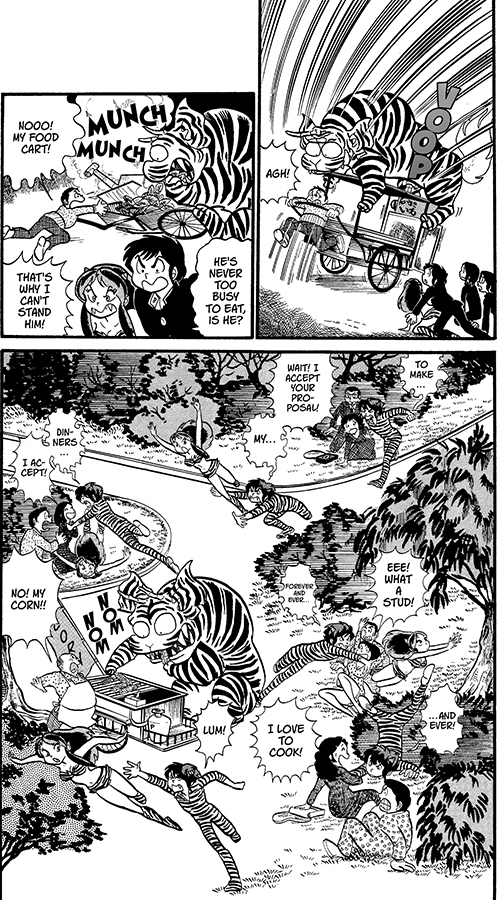 Urusei Yatsura does have some rough edges in its opening chapters, but those wear away as the story progresses. Even after four decades, Takahashi's series is still very funny and visually wonderful to behold. Despite some of its more questionable jokes, Urusei Yatsura will have no trouble forming a grin on any reader's face. (Whether said grin is a happy one or a perverted one will depend on what kind of person you are!)