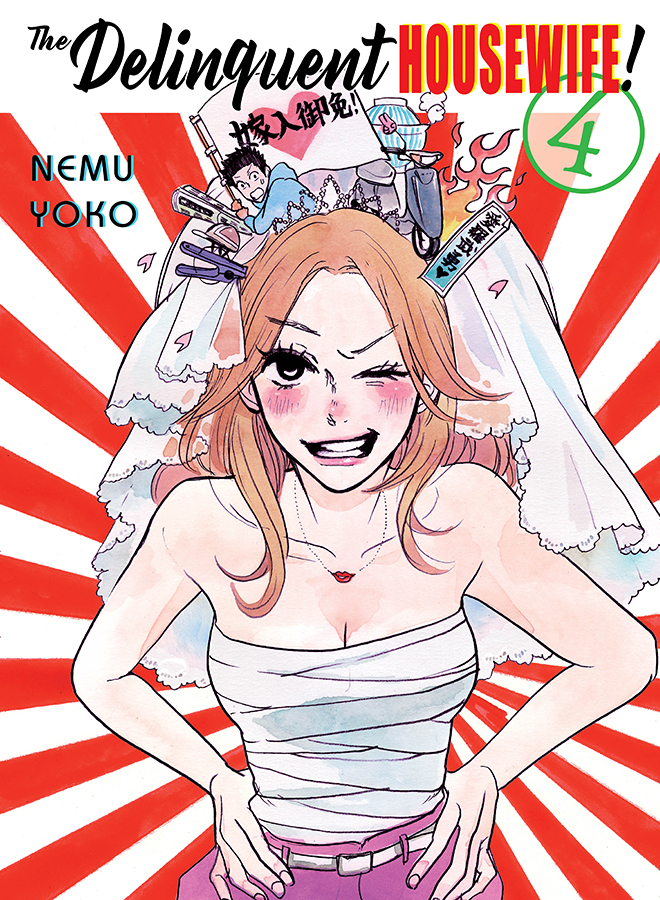 I was taken by surprise to that Nemu Yoko's The Delinquent Housewife! had reached its conclusion. A part of me thinks that it might've wrapped things up too soon, as there seemed to be quite a lot of open doors still needing to be closed. However, not only does The Delinquent Housewife! find a way to reach its conclusion, it also does so without any rushed sense of urgency.

After Dai confronts Yoshino and her means of blackmailing, his mother discovers Komugi's biker jacket. It is here where Komugi decides to tell her mother-in-law the entire truth about her past. At first, she seems to take it well, only for one minor speed bump after another in the two's relationship to build up towards aggravation. What's more, during a night out of frustration, Dai attempts to kiss Komugi, leading towards more awkwardness under the household.

It was inevitable that these occurrences were going to happen in The Delinquent Housewife!, and perhaps it was best that they were achieved in a domino effect. What made its presentation palatable is how everyone handles these situations. Dai looks back at the kiss in a very immature manner, whereas Komugi spreads the truth with her friend. This way of presenting two perspectives of the same event demonstrates the mentality of both people, comparing a child's thoughts to that of an adult's. There's also their mindsets during the awkward walk home, with their thought processes running at over a million kilometers an hour with worries and regret filling their brains.

All of this is captured both with clever wit and relatable aesthetics. While it was absolutely wrong for Dai to do what he did, at the very least he finds himself filled with heavy remorse for his actions almost right away. The event also acts as let another weight on Komugi's shoulders, as she's trying her best to prove to her mother-in-law that she is worthy of her son Tohru's hand in marriage. Nevertheless, the sibling-in-laws persevere with their problems not entirely solved, but with heads held high for what the future will bring to them.

The final chapter has the family rushing to get things prepared for Tohru's return, and in comical fashion everything from the celebratory cake to Komugi's spruced-up looks is ruined. But as the time for his return winds down, she, Dai, and the rest of the family accept that things are going to stay crazy for just a bit while longer. Thankfully, there's enough love to overpower the wilder sides of family, one of the bigger up takeaways this series has presented throughout its four-volume run. Whatever happens with Tohru and Komugi after the tale reached its end is up to anyone's interpretation, but I'm surely to guess that all will be fine in the long run.

In the end, The Delinquent Housewife! delivered a good story about hidden pasts, teenage curiosity, and finding one's place in a new family. It had its fair share of ups and down, but as the series wrapped up, it gave its readers something enjoyable. While the series may not go down as one of the most memorable in recent memory, The Delinquent Housewife! managed to be fun and quirky enough to be worthy of at least one read-through. If there's one thing you can take from Yoko's story, it's this: not even a delinquent can steer past the wrath of one's mother-in-law.