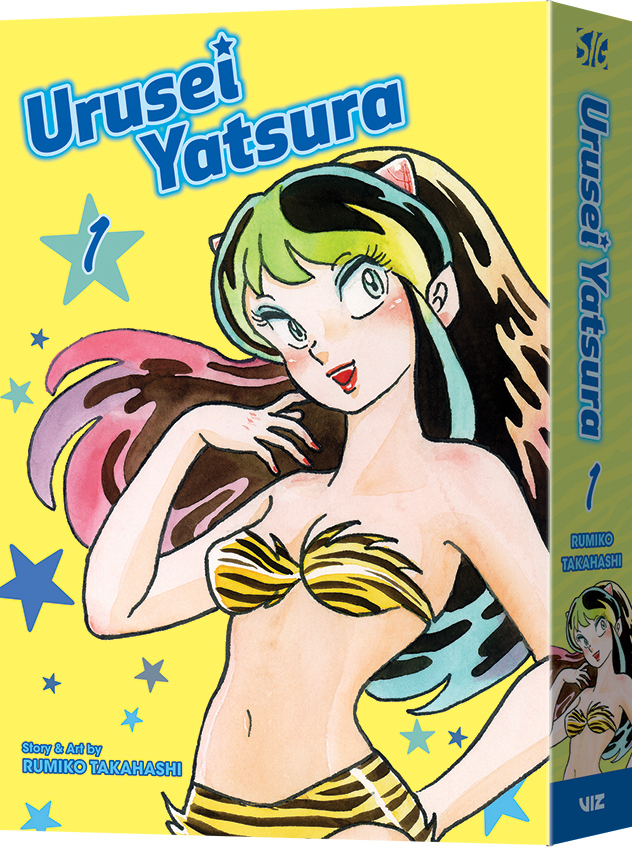 Ask any longtime anime and manga fan about the rise of the tsundere character, and most of them would point out Urusei Yatsura bombshell Lum as its starting point. Rumiko Takahashi's story of the unlucky (and perverted) Ataru and his run-in romance with the beautiful alien is considered by many to be one of the most influential comedy series, giving way to many a tale about harems and geek-gets-girl scenarios. Now after many years out of print, Ataru & Lum are returning to American shores!

VIZ Media announced today that the original Urusei Yatsura manga will be returning to bookshelves very soon, with the first massive volume arriving on February 19th. The complete series is scheduled for English publication throughout the year, with future volumes releasing on a quarterly basis.

"Urusei Yatsura is an iconic manga series, and until now, has never been fully published in English," says editor Amy Yu. "Our new VIZ Signature editions allow readers to enjoy the complete Urusei Yatsura for the first time ever. We hope new and veteran manga fans will add this legendary series to their collections!"

Urusei Yatsura is the series that launched Takahashi's career, giving way to a path that would lead her to also create Maison Ikkoku, Ranma ½, and Inuyasha just to name a few. Last year, Takahashi was inducted into Will Eisner Comic Awards Hall of Fame, signifying her importance in the realm of manga and comics alike. In the 1980s, Urusei Yatsura was also adapted into a lengthy anime series, with various OVAs and film versions throughout its legacy. The anime would also serve as a launching pad for a young director named Mamoru Oshii, who would later go on to direct the iconic Ghost in the Shell.