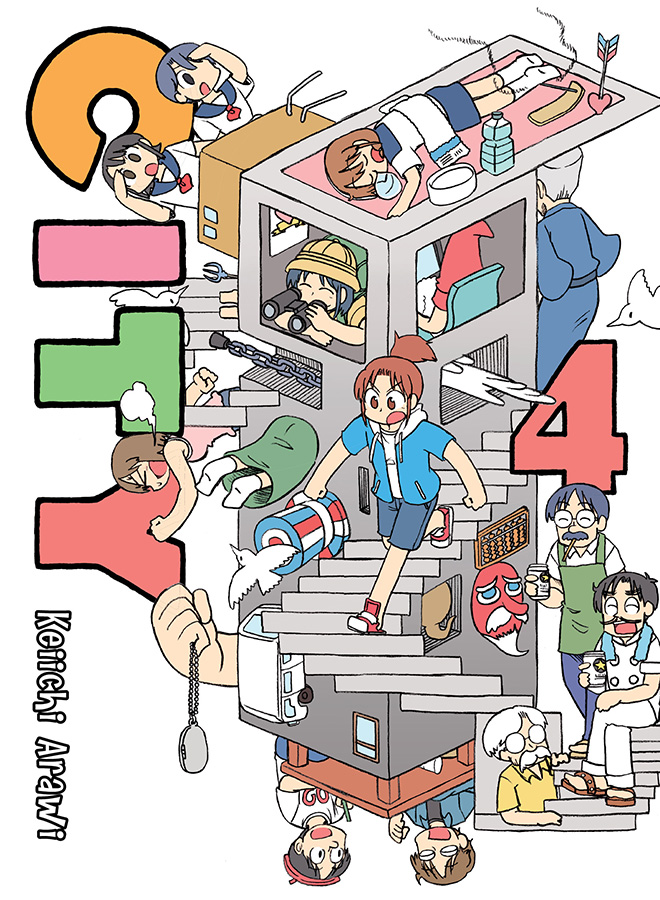 It's no wonder why the third volume of Keiichi Arawi's CITY was somewhat low-key; the creator of nichijou was plotting something truly epic in his massive universe. With the bountiful amount of characters that have appeared thus far (and trust me: there's quite a lot of residents of this town he's writing about), it would feel certain that such a big undertaking would occur soon. Volume Four of CITY is where the story reaches a surprisingly massive (and hugely funny) arc, one that gets just about every person introduced thus far involved with the madness.

The latest volume of CITY starts things off on a loopy note, with Niikura and Nagumo chasing after a bunny-eared cat with a pendant. All of a sudden, Nagumo is taken in by a mysterious butler, who claims that the lady has won one of Granny's many prizes. Joining her is the reluctant Nice Man, who is itching to escape from the massive tower they're stuck in due to his overwhelming modesty. Together, with the aid of Wako, the two prize recipients trot through the levels to take on every test at hand in the Chamber of Trials.

Although Arawi has done long arcs in his past work, he has never showcased a back-to-back-to-back epic tale in any form. What follows in these arcs is the tale of a man who doesn't wish to be rewarded clashing with a girl who's screaming for a pampering. As a result, Nagumo tries her hardest to surrender so she can return to the more relaxing main floor. In CITY fashion, her mission is a lot easier said than done, as submitting to defeat is just as hard to accomplish as earning a victory.

What occurs in this volume of CITY goes beyond the lengths of what most gag manga writers strive to achieve. Yes, it goes crazy lengths with Niikura trying to gain her pendant back from the cat, resulting in one physical punchline after another. It's when we see how far classmates go to keep a fellow student comfortably sleeping during lunch when you bear witness to the brilliance that Arawi has to offer. All of this is captured in his trademark art style, which is both wackily cartoonish and beautifully detailed with its characters and the worlds they're surrounded in.

How CITY goes about portraying the strong bonds between every citizen in town is surprisingly deep. The camaraderie between sports players as they study the legendary Tsuchinoko and a trio of older citizens on a mission to reopen another person's restaurant demonstrates the power of close-knitted town aiming to keep its identity alive and strong. Although things often go off the rails with everyone, they rarely ever find themselves breaking away from what this strange and often insane town has to offer. If anything, Arawi uses his skills to demonstrate how even the most asinine of situations can result in some deeper connections.

CITY goes above and beyond to deliver one comedic adventure in the fourth volume, with a Chamber of Trials that results in bigger levels of crazy than this series has given in the past. It demonstrates the power of community, while at the same time laughing at & with itself for the levels of absurdity that are showcased. Often brilliant and visually stunning, the newest chapter in Arawi's CITY demonstrates the strengths of being nonsensical in even the greatest trials of one's life.