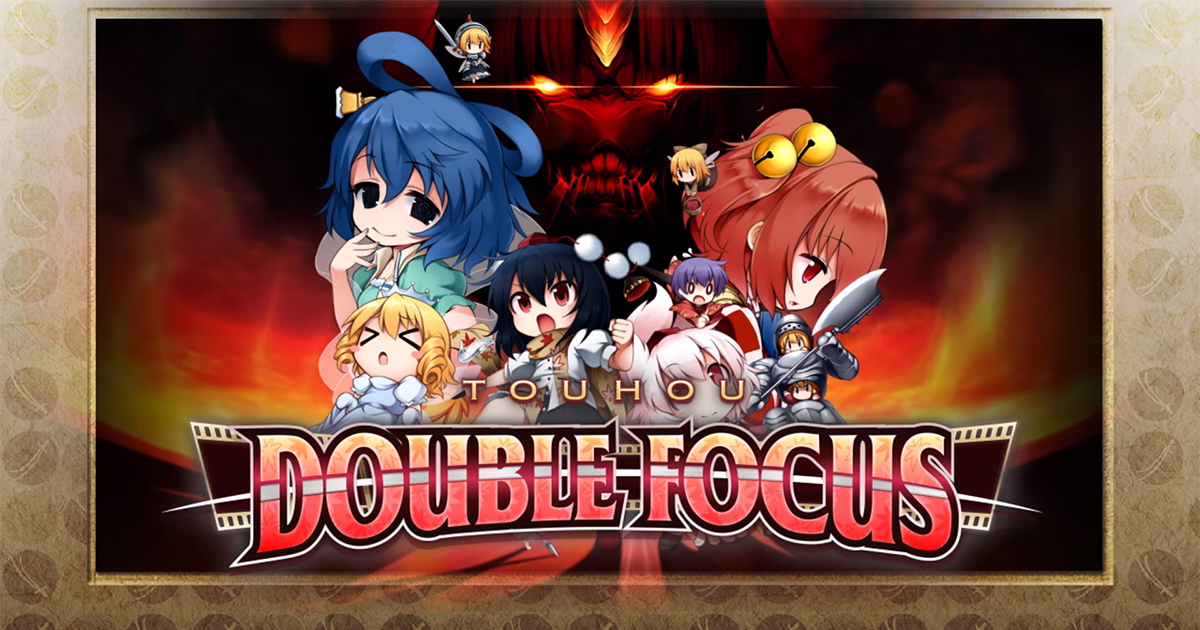 The Touhou series has seen many titles since its PC-98 days, but it's only recently that the humble doujin franchise has seen any kind of release in the West. It's a good thing that even the spin-off console titles are making it here, but unfortunately Double Focus is one of the weaker entries. (This might explain why it's a freebie if you buy the retail version of Genso Wanderer for the PS4.) The thing is, there's a great game there, but it's hampered a bit by terrible mechanics and artificial difficulty.

This entry into the Touhou Project series is a 2D Metroidvania that hosts many of the character from the Touhouverse, although the story focuses on the Tengu-girl Aya and her Dog-person friend Momiji. Each character has their own customizable move sets, but you'll need each characters' moves to get through each level. The levels themselves have a lot of terrain to either traverse or avoid. There are hazards like instant death spikes, which can make you lose progress, seeing as there aren't any save spots in the levels. 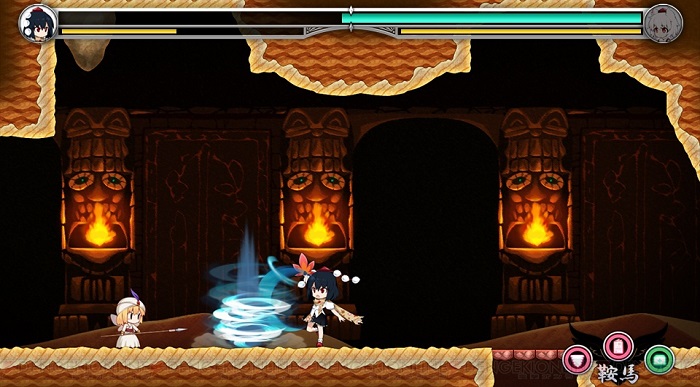 There's only one central hub, but you can use the portal books that you can find to either come back to the hub, or go to the last place you put a portal. Each area can only hold up to three portals before it starts erasing your older portals. Thankfully you can use the map to switch which portal is active, so moving between areas isn't terribly difficult so much as it is something the game forgets to mention.

As for the rest of Double Focus's gameplay, Aya can dash both on the ground and the air, and Momiji can run across the screen and up walls. Every action -- including attacking -- uses stamina. Stamina mechanics in games are always controversial, but in this game it's highly annoying. Since you don't gain levels, you can't reduce the amount of stamina consumed for an action. You can increase your max health with pick ups, but no such item exists for Stamina. Lowering the difficulty also doesn't help in this regard. 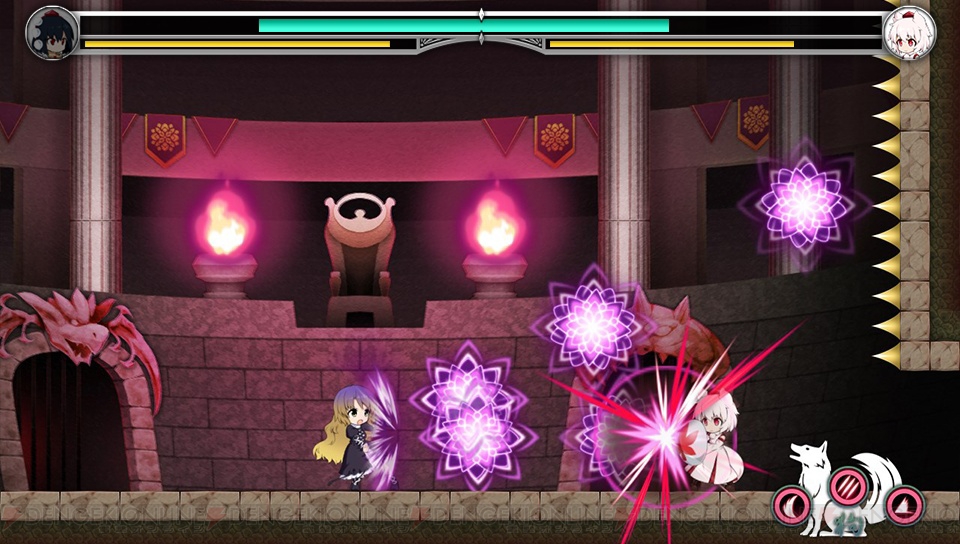 There are later passive abilities to equip that half the consumption of Stamina, but you get it so late, it won't be able to get used all that effectively. This is especially since it will take up an ability slot, of which you can only have three abilities at a time. This issue could have been circumvented if there was a fourth slot. Alas, the developers didn't have that much forethought.

The game is cute and fun when it's not being difficult, and whether that's due to it's actual difficulty level or the game's mechanics fighting against you is up to your interpretation. Invincibility frames are small, and if you play on any difficulty higher than beginner, the amount of damage you take skyrockets. The game's difficulty also isn't helped by bad animation with limited frames of movement. You can tell this game was made on a practically non-existent budget, because it feels cheap, even by Touhou standards. Other games in this series are well-made compared to Double Focus. 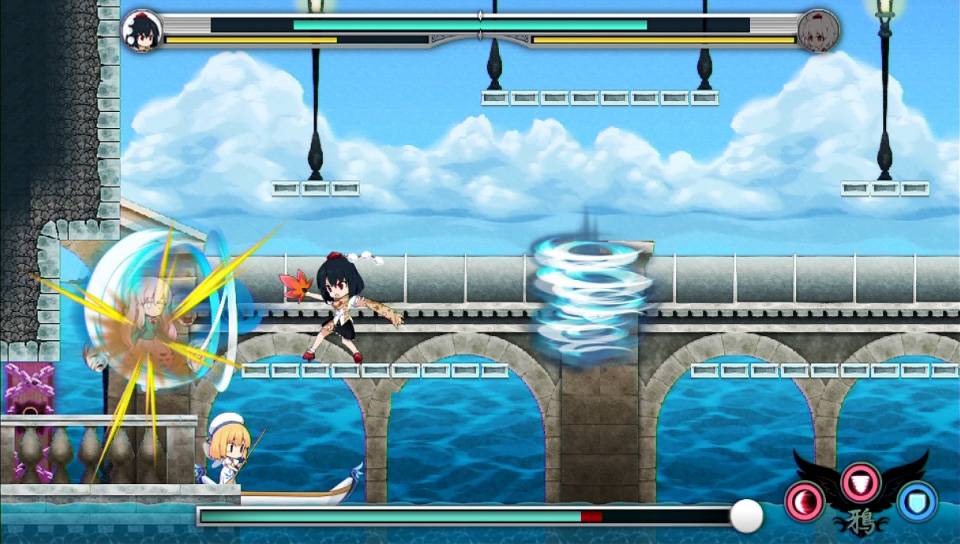 On the positive side, the game is short, and you can re-challenge any of the game's bosses. There's also a great deal of cute humor in the dialog of the game. If you use Aya's snapshot ability, you can take a picture of a character and read up and listen to commentary style descriptions of the various fairy enemies and NPC's. It's hard pulling up the snapshot book on the PS4 version though. The fairies themselves are sometimes dressed up as parodies of classic horror villains like Jigsaw, Jason, and even Silent Hill's Pyramid Head. Despite their cuteness though, they are tough.

Combined with the artificial difficulty, I'd recommend playing Double Focus on Beginner, as it can get pretty sadistic quickly. You'll likely otherwise pull your hair out if you aren't skilled. The other saving grace for this game is its price on the PSN Store if you buy it individually from Genso Wanderer. On its own, Double Focus isn't a bad game, but there are certainly better ones out there, even within the Touhouverse.

The Good: The humor for the commentary on the bestiary is great.
The Bad: Even basic attacks run on an unsympathetic stamina meter.
The Ugly: It's way too easy to die, chief among reasons being the lack of invincibility frames.

SUMMARY: Touhou Double Focus is a cute, but simple Metroidvania in the Touhou universe that could have been much better with improved gameplay.

Promotional consideration provided by Robert Agustin of NIS America. Reviewed on the PS4.