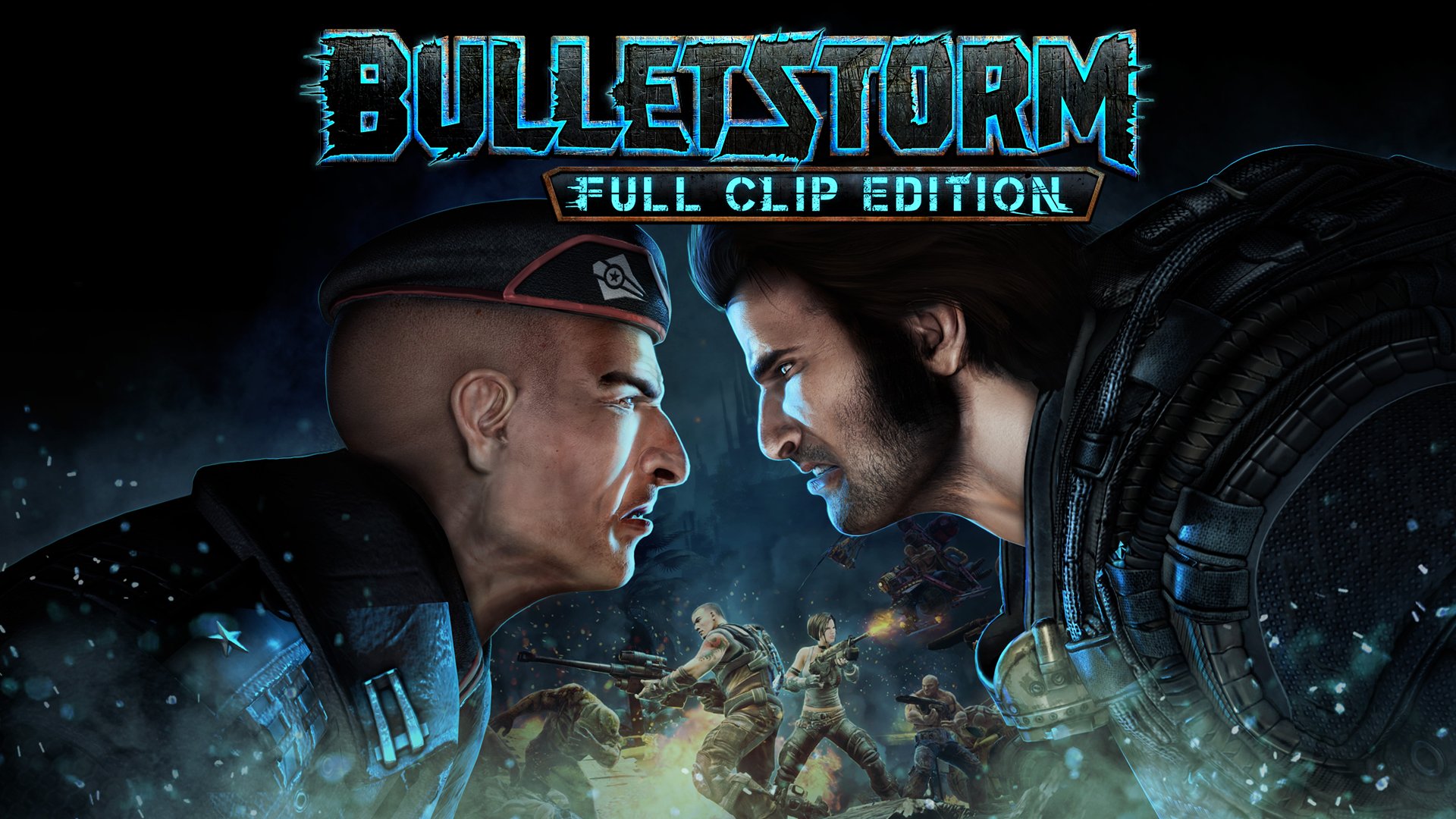 Without a doubt, People Can Fly's Bulletstorm was last-gen's most underrated first-person shooter. Violent, original, and incredibly funny, the game found itself lost under the rubble of every other shooting game out there attempting to beat Activision and Electronic Arts at its own game. Sadly it didn't get the pomp and circumstance that it was deserving the first time around, which is why I'm happy Gearbox came around to rescue Grayson, Ishi, and the rest of the gang for another chance at blood and glory! And thus, Bulletstorm: Full Clip Edition has arrived with guns literally blazing all over the place.

Taking on the role of Grayson Hunt, players will seek vengeance on Star General Sarrano, a slimy turd bucket if there ever was one. Tricked into killing innocent people, Grayson and the Dead Echo crew go rogue and vow to take him down by any means necessary. Of course, the means involves them ramming and shooting down his ship and marooning them on an alien planet. There Grayson and lone survivor Ishi roam the land to seek out both Sarrano and a way off of this death trap. 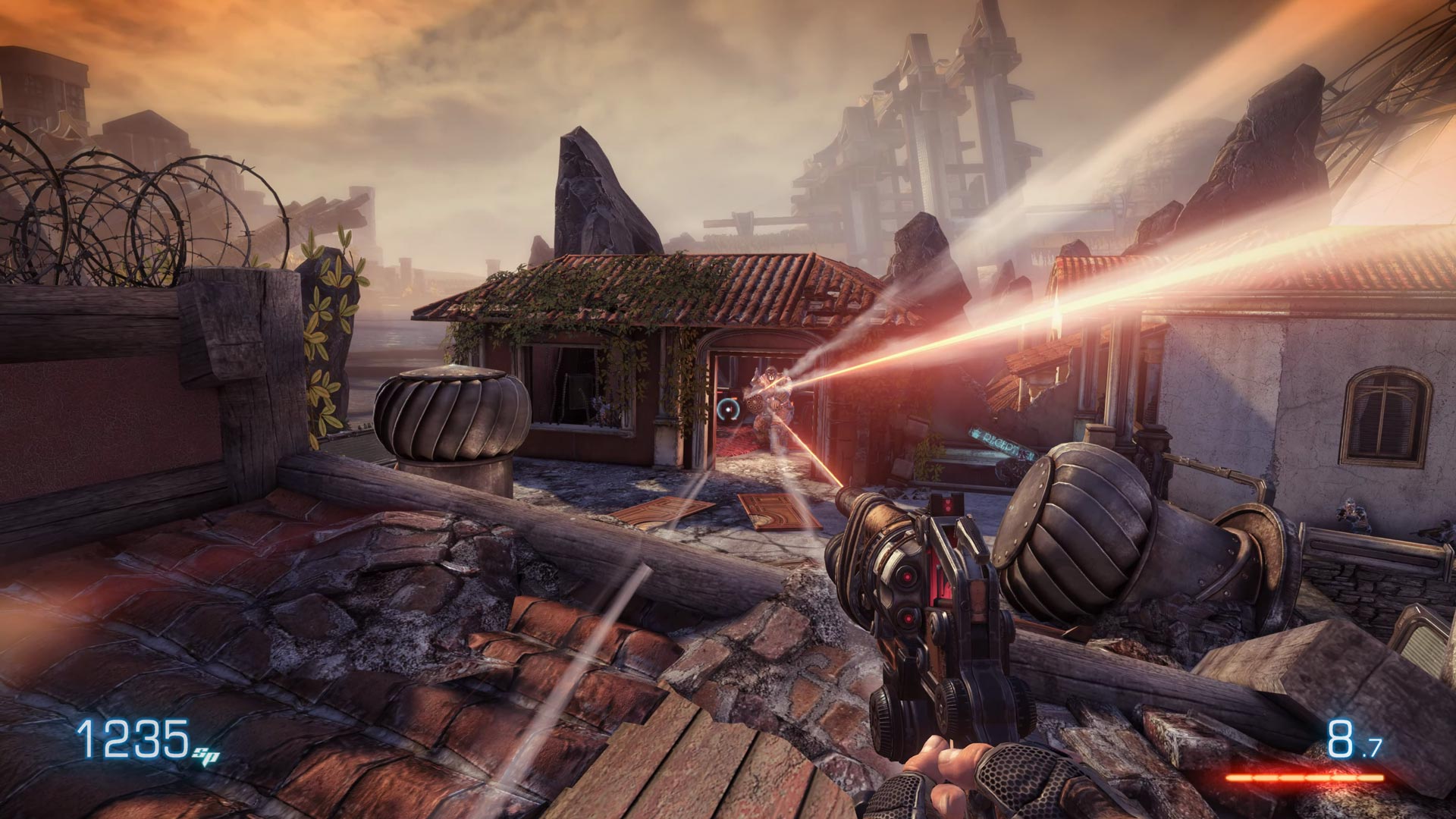 The story is admittedly as paint-by-numbers as one can get with a revenge plot. What makes it stand out is its means of humor, with some of the best insults heard in a game flying into the faces of the trigger-happy players. It also helps to have the main character be voiced by renowned voice actor Steven Blum (AKA Spike Spiegel in Cowboy Bebop and Roger Smith in Big O), who brings a rough-and-tough flair with a solid funny bone intact.

Of course, what matters most is the gameplay itself, and it's fortunate that it's just as fun as it was when it first came out in 2011. You've got your mixture of gun types from pistols and rifles to a grenade cannon and a launcher that literally penetrates its foes with a fast-powered drill. However, your best friend in this game (besides Ishi, of course) is your power leash, which can grab objects and people and fling them into your direction to make some extremely fun kills. Literally giving foes an extra boot will result in some sick combos and knee-slapping deaths, with your rewards and points earned helping to upgrade your arsenal. 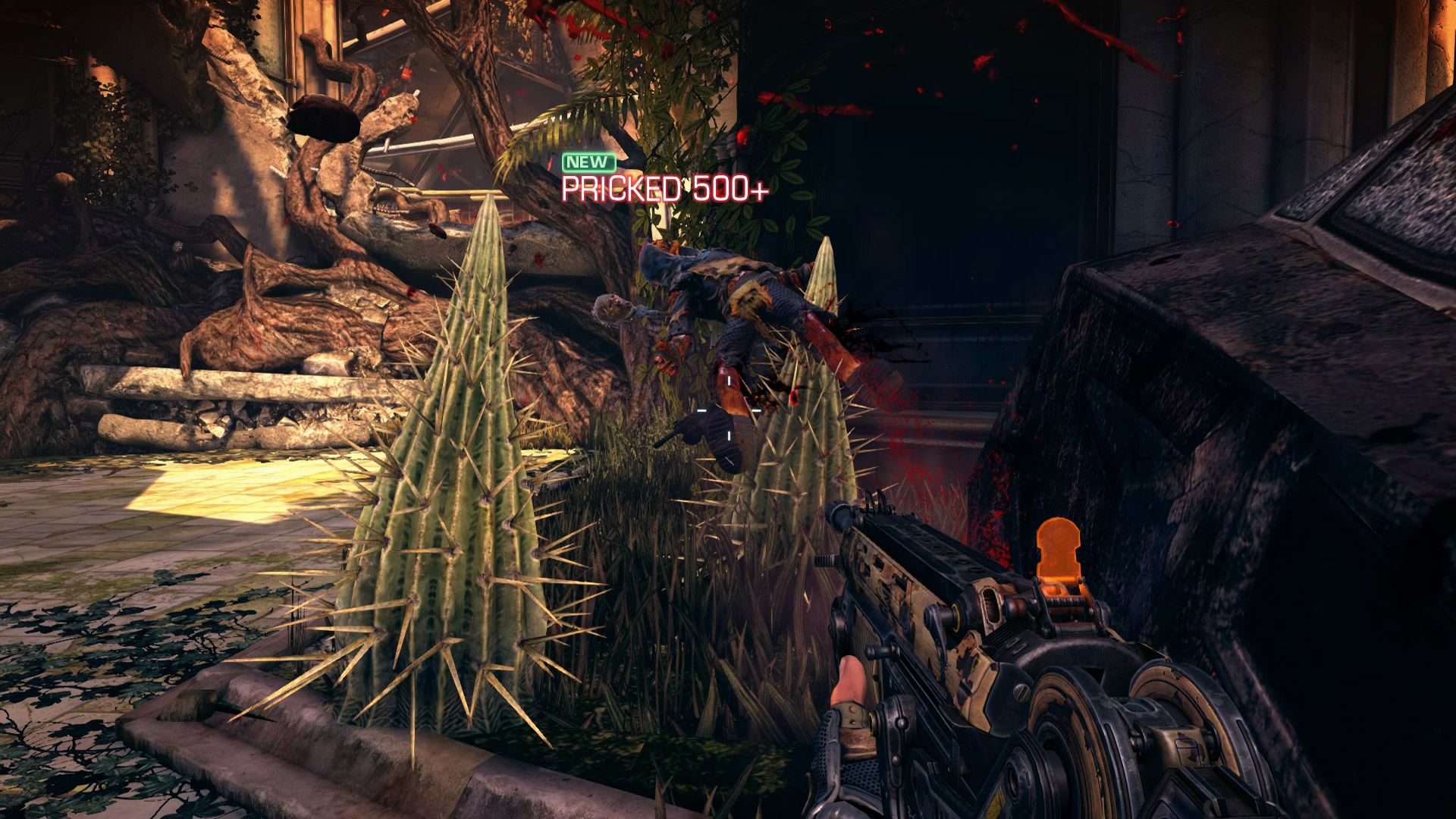 What makes Bulletstorm exciting is the many discoveries you'll uncover as you make your kills. Yes, you can easily just fill the Final Echo soldiers and monsters with bullets, but when the environment around you is built to make things die, that's when things can get rather interesting. Impalements, electrocutions, man-eating plant consumptions, explosions, and even simply kicking them off a platform to their doom is all at your disposal, which helps to keep the gameplay from ever feeling stale. It knows how to show players a good time, which is something a lot of the AAA gaming realm seems to have lost touch on.

Remastered for the current consoles and PC, the game looks stunning on all fronts. Moving at a decent 60 frames a second, the action you bear witness to moves about smoothly during the toughest of battles. While I did notice a drop when a lot of enemies were in the same area, it never reached a bothersome level where the movement slowed to a crawl. Graphically, the only issue I came across was some lip-syncing issues during the FMVs, something that I recall being an issue with the original game years back. 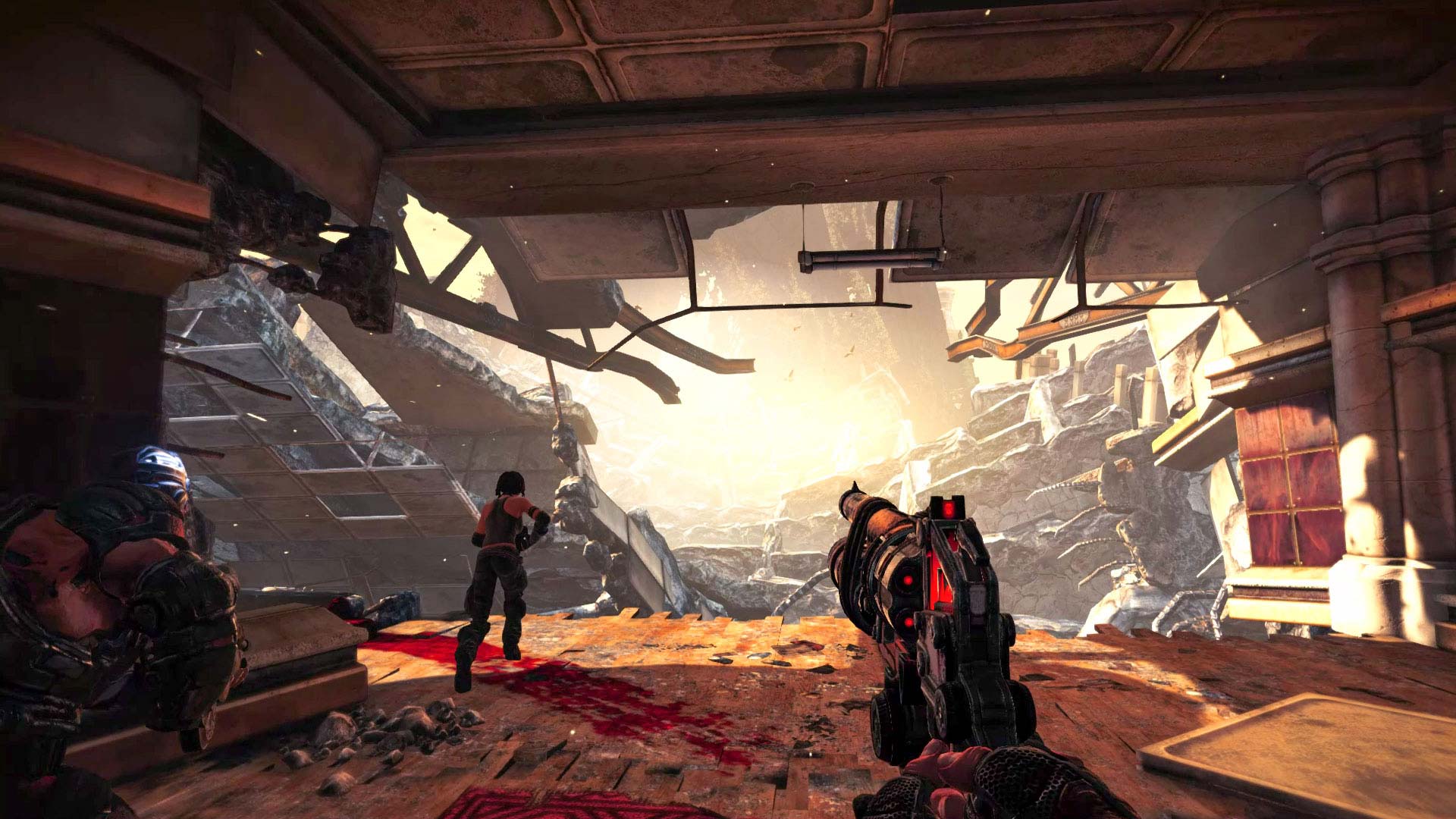 The single player campaign will take you roughly nine hours to beat on Easy Mode, which is a decent amount of time for a first-person shooter. Beating the game the first time around will unlock Overkill Mode, which will allow you to replay the entire game with every weapon at your disposal with the chance of earning infinite ammo. Those who preordered the game also received the nice bonus of "Duke Nukem's Bulletstorm Tour," which gives players the chance to experience the full game as everyone's favorite blonde-haired anti-hero. (Those who didn't preorder have to fork over $5 to experience it, but trust me when I say it's worth it!)

Outside of the regular game, players can also experience Echo Mode. Here gamers will run through thirty challenge maps in order to get the highest score, with the ability to showcase your numbers online to see who can be the top dog of them all. Four players can also meet online for twelve co-op challenges, where 20 waves of enemies big and small will hurtle towards you with war-cries and bullets at their arsenal. 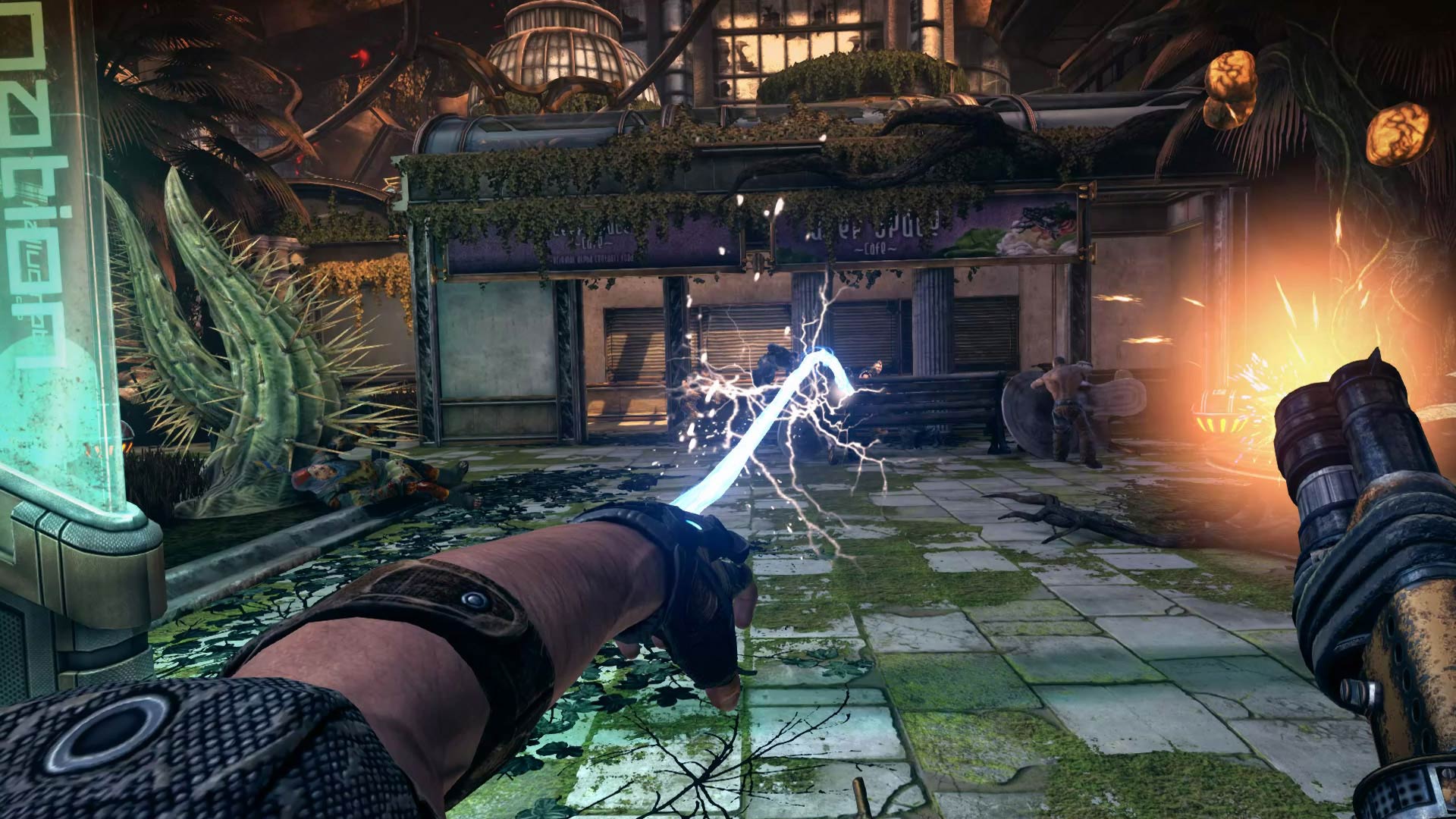 However the real question is if Bulletstorm is worth double-dipping if you already bought it last-gen. While it was fantastic revisiting this game after a long time, I cannot think of any reason why someone would want to spend $60 on the same game again twice. That's why I would recommend either waiting for a sale if you already bought it back then or using a coupon if you've got one handy. Those who've never played before, though, I can definitely say it's worth every penny!

If you've never dived into the madness that was Bulletstorm the first time around, then by all means give it a go. Even after six years since it first graced PS3s and Xbox 360s, it still feels just as fresh and unique. With it's fun campaign, exciting multiplayer modes, and the ability to play as the original gaming badass, the Full Clip Edition of Bulletstorm is an essential for lovers of shooting games everywhere. Strap it on and jump into this insanity, or there will be some dick-killing involved!

Promotional consideration provided by Brian Lee of ONE PR Studio. Reviewed on the Xbox One.