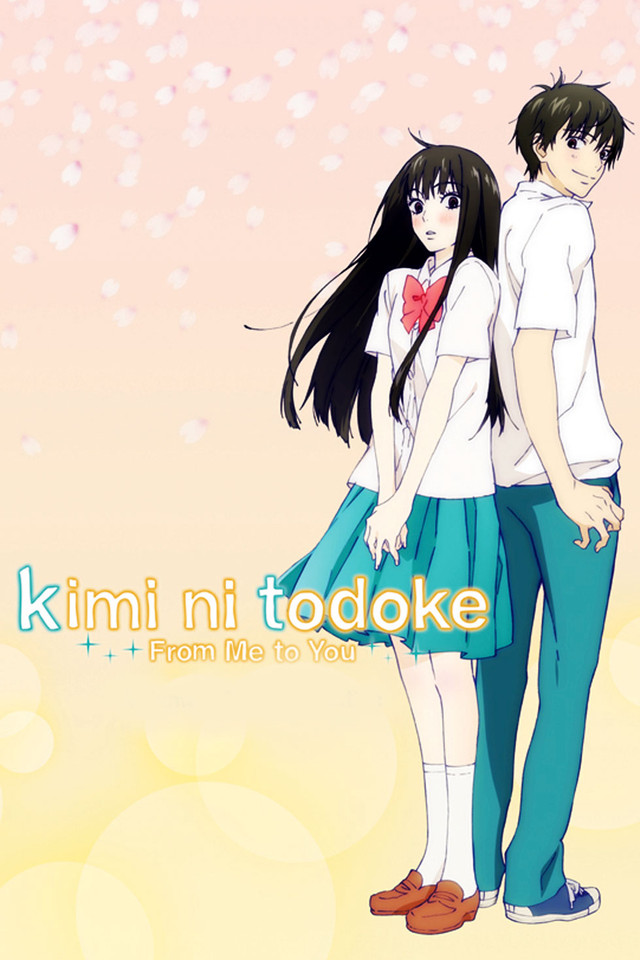 As readers can probably tell, reviewing anime is a lot harder than it looks. We're not talking about the actual critiquing aspect of it, which -- to be fair -- does come with its share of challenges. No, what I'm referring to is the actual picking-and-choosing of which anime we plan to cover. Reviewers have to sort through the ones that plan to air each season and decide which ones look interesting enough to have a go at, tossing the rest in either a pile for when there's time to view something or -- worst-case scenario -- something we'll never watch. (This winter season alone, I am currently watching ten new series that are currently airing out of the over two dozen fresh programs on Crunchyroll, The Anime Network, and whatever the hell you wanna call Amazon's anime thingamabob.)

Because of having to push some of these programs to the side, I find myself missing out on a good chunk of some very well-written and often brilliant anime series. This leads me to one such show that grabbed my attention thanks to a recommendation from a good friend (and former B3 member) that deserves a brighter spotlight than it was initially given: 2009's Kimi ni Todoke (From Me To You). 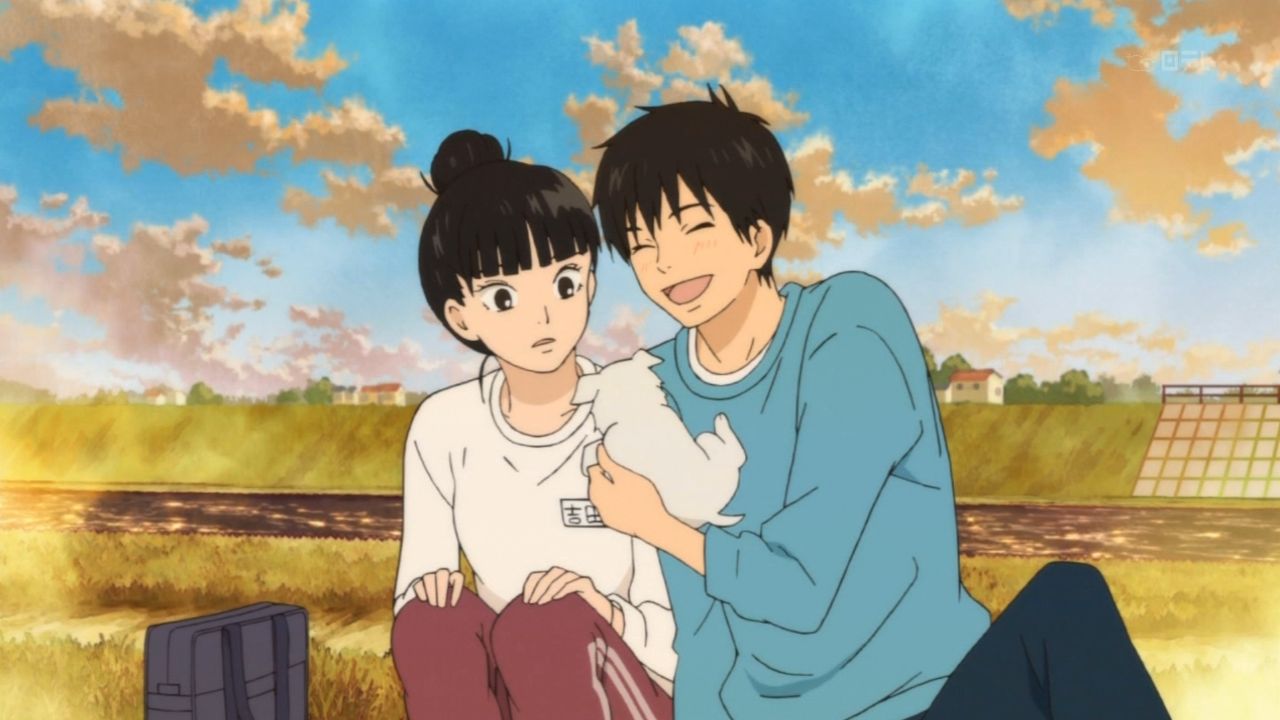 Based on the manga by Karuho Shiina, Kimi no Todoke follows Sawako Kuronuma (Mamiko Noto), who has been dubbed "Sadako" by her classmates due to her looking like the creepy girl from Ringu. Her shy mannerisms keeps her from making friends easily, until a friendly male student named Shota Kazehaya (Daisuke Namikawa) greets her warmly. Soon other students follow, including her future BFFs Ayane (Miyuki Sawashiro) and Chizuru (Yuko Sanpei). As the series progresses, Sawako's means of getting along with others pushes her out of her shell, as well as her feelings for Kazehaya blossoming into something even she cannot fathom.

Of course, with every romantic comedy, there are a few roadblocks that keep Sawako from showcasing her true feelings for Kazehaya. As it turns out, Kazehaya was the heartthrob of middle school, to the point where the female student body had to make a truce to not go after him because they were head-over-heels in love with them. Fronting the whole thing was the one who loved him the most, Umi "Kurumi" Kurumizawa (Aya Hirano). This soon leads to a rivalry between Kurumi and Sawako, which starts on nasty terms before it downgrades to more friendly terms. 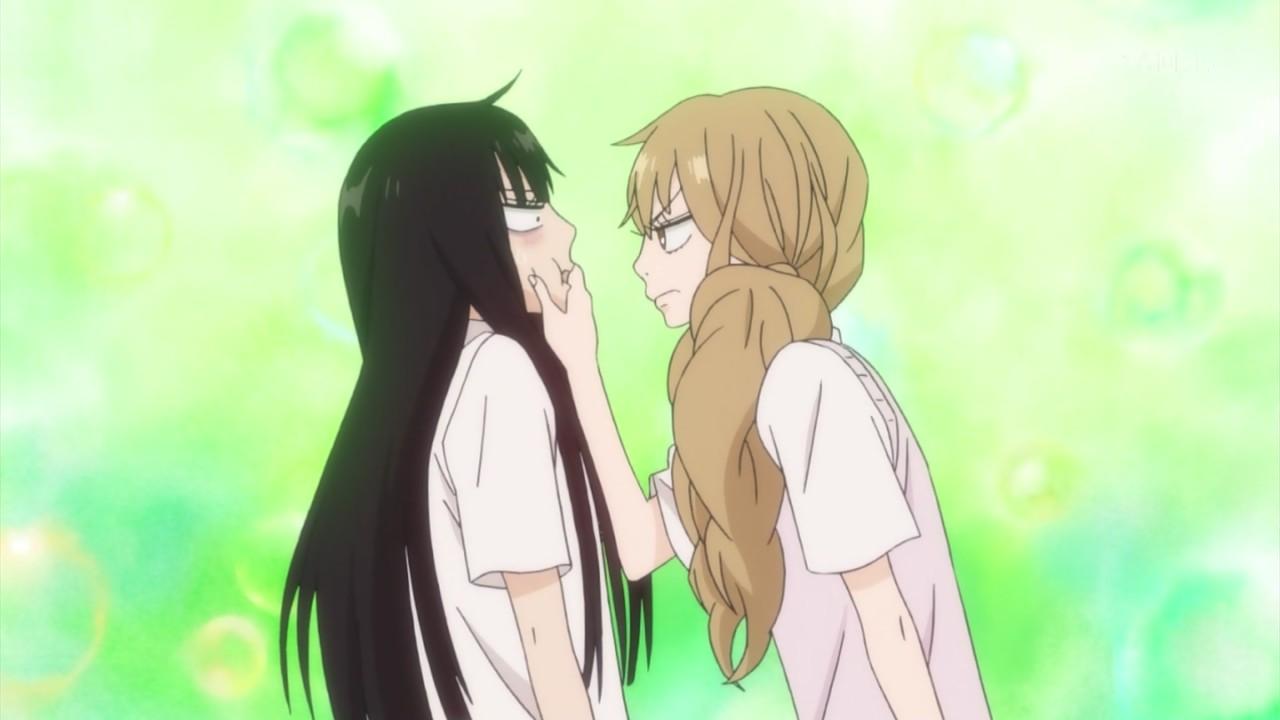 The most important thing about Kimi ni Todoke is its means of presenting its protagonist. Sawako is often showcased as a very shy individual, having very little social skills and the means to speak up during the most important of things. Whether it's with complete strangers, close friends, or even her own parents, Sawako has a hard time voicing her feelings and ideas on what she wishes to do. However, thanks to both Ayane and Chizuru, she breaks out of her cocoon and becomes both well-accepted by her peers and a stronger individual.

Nevertheless it can get rather frustrating seeing both Sawako and Kazehaya wait for the other to confess their feelings. It also doesn't help that both students have a hard time being clear about their emotions to one another, leading to uncomfortable moments and some migraine-inducing misunderstandings. This is very apparent in Season Two of the anime, where they start off really close before Sawako becomes too shy again to give him a Valentine's Day gift. And thus, an emotional tennis match between the two erupts, to the point where the average viewer would grab their TV and shake it about whilst screaming, "JUST F**KING SAY IT!!!!" during just about every episode. 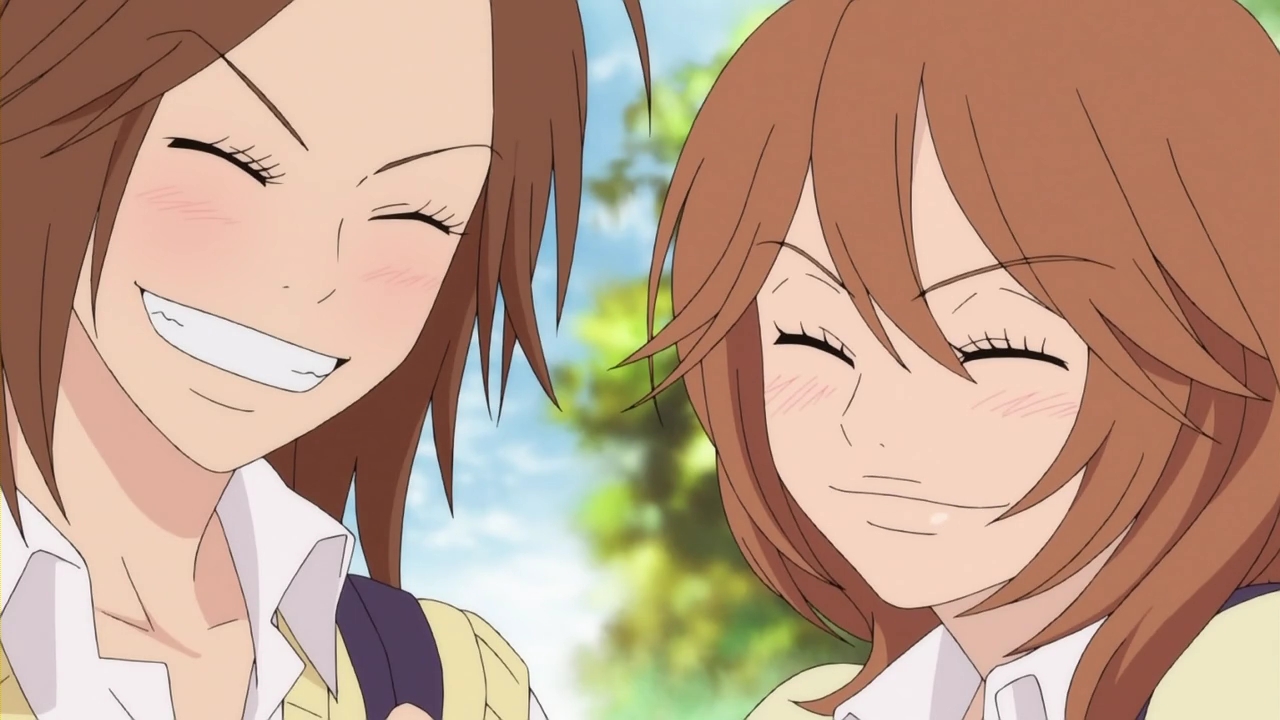 Despite this minor irksome storytelling aspect, Kimi ni Todoke is a very well-written series. In fact a good chunk of it is very funny, thanks in part to Sawako's chemistry with Ayane & Chizuru. The two act as sort of the Marcy & Peppermint Patty of the friends' circle, helping out Sawako's Charlie Brown-like social awkwardness to the point where she can finally stand on her own two feet. It's very goofy whenever Chizuru gets into her tomboyish ways, with Ayane there to put everyone back on the ground of realism to properly deal with issues. (This in turn gives Sawako the chance to gain a backbone and stand up for herself when pressed against the wall, especially when other female students become jealous of her hanging with Kazehaya all the time.)

It's because of both the humorous and humanistic aspects of this series that keeps it relatable, sometimes far too well. In a couple instances I kinda squirmed in my seat when watching Sawako deal with simply talking with other students and showcasing her feelings. (As one who is godawful at small talk, I can relate to her troubles on many levels.) Even its treatment of lovestruck students is done so in a way that keeps it grounded from being too fantastical. It's frustrating to watch Sawako and Kazehaya try to tell each other how they feel, mainly because we've all done the same damn thing in that situation. 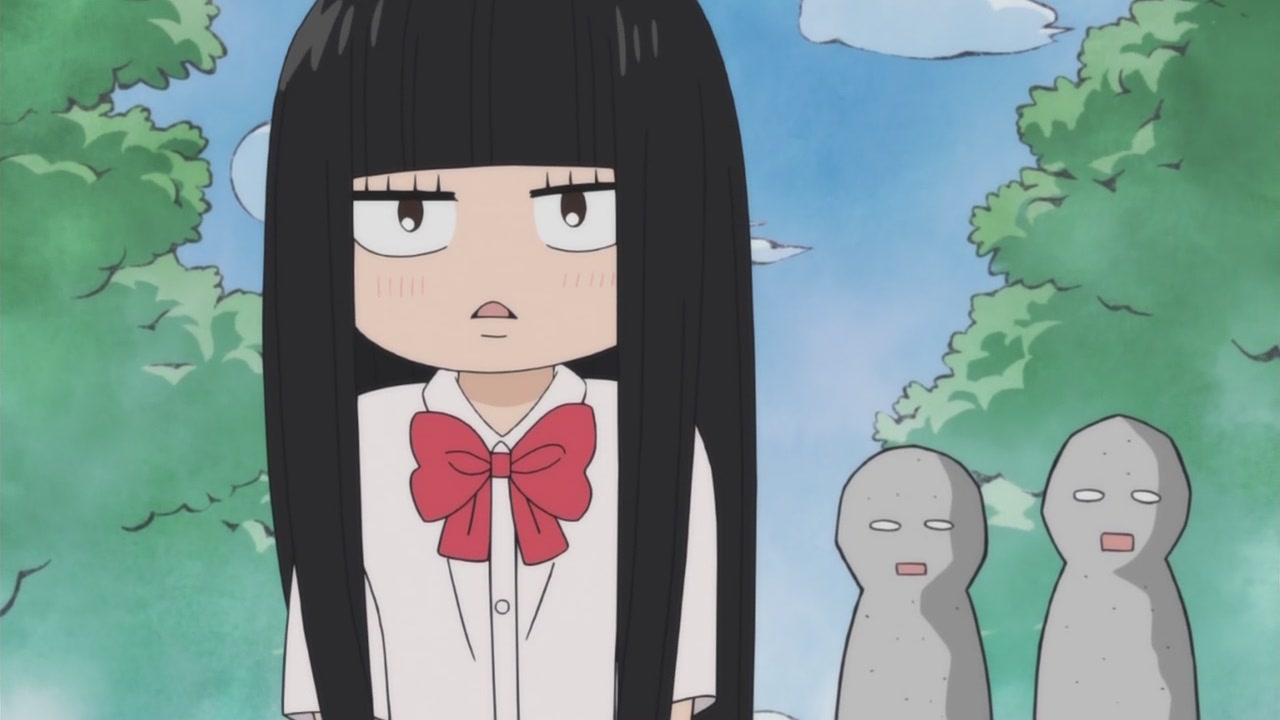 And yet, because of its charming presentation, it's hard to get angry at Kimi ni Todoke. Thanks to Production I.G switching between its beautiful animation style and some super-deformed-looking gags, the series keeps its viewers at bay with some of the show's more eye-twitching aspects. It knows when to give us something visual to laugh at to break the lovesick tension this anime loves to place on the viewers' shoulders. Not only does it take away some of the relatable pain of the more emotional moments of the show, but it gives Sawako the chance to be somewhat of a positive comedic fodder.

A lot of credit also has to go to the voice cast, with Noto perfectly capturing the shy girl aspect in her performance of Sawako. As Chizuru, Sanpei gets both the peppy tomboyish attitude down pat with a slice of strong willingness when the tough gal act calls for it. In her role of Ayane, Sawashiro acts as the voice of reason, sometimes using a more stern tone to push the rest of the students to realize how hard her close friend has to work up the courage to talk to them, much less participate. As for Namikawa's Kazehaya, while he does perform the spunky student part well, he comes off a little too cold when placed in a more serious situation. 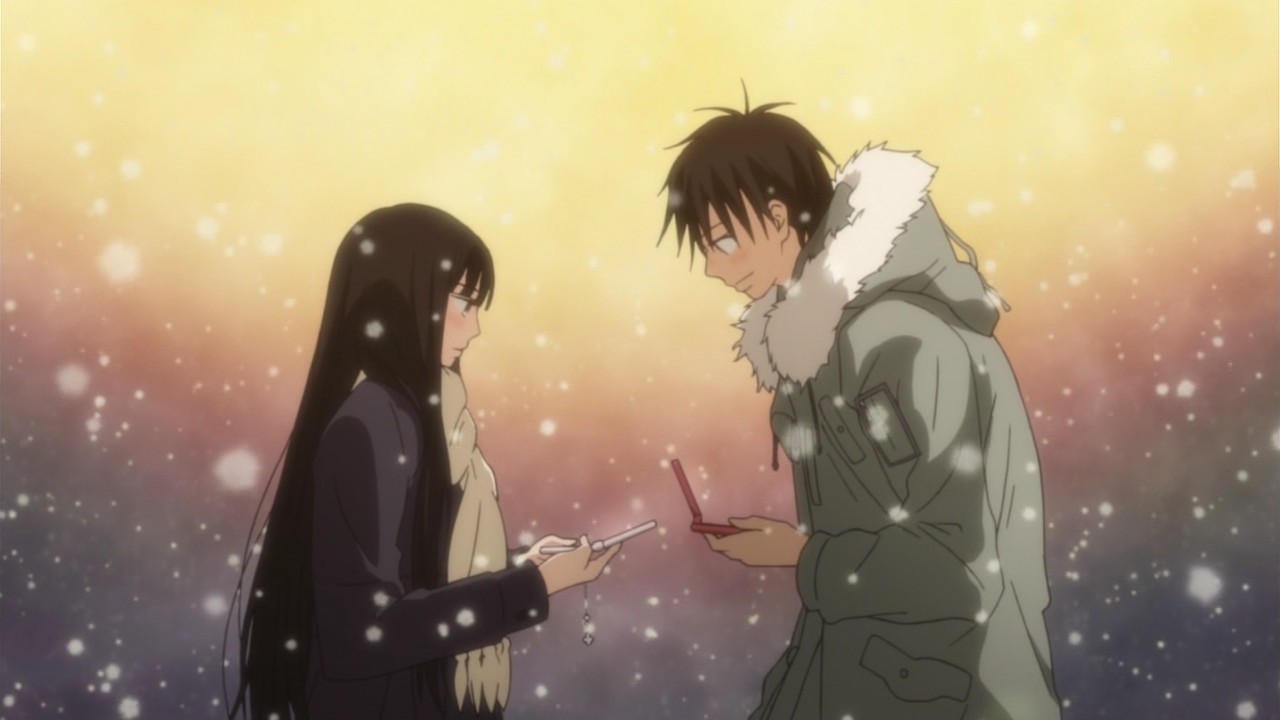 New-age musicians S.E.N.S. (xxxHolic, Kurau Phantom Memory) showcase a range of both light-hearted and heartfelt melodies that capture the mood of each scene wonderfully. Tomofumi Tanizawa performs the openings for both seasons, with Season One's "Kimi ni Todoke" being a lovely song about a blossoming relationship between friends and lovers; Season Two's "Sawazake" tones down the bright aspects for a more melancholy tune that fits with the overall mood of that half of the series. Chara's Season One closer "Kataomoi" is an empowering track that focuses on the main character blossoming into a more outgoing person, whereas MAY'S's Season Two end theme "Kimi ni Todoke..." gives off an unsure feeling on how the main characters' relationships will wind up going as the show goes on.

Kimi ni Todoke is one of the better romantic comedies the anime industry has brought us in the last decade. While there are some aggravating moments regarding the Sawako/Kazehaya relationship, it grounds itself enough to point out the realistic aspects of these sorts of friendships that may evolve into something else entirely. Come for the romance, stick around for the laughs, and soldier through the hardships that Sawako, Kazehaya, and the rest of Kimi ni Todoke's likable characters delivers throughout its 38-episode run.

Also, as a Bostonian, I approve of Kazehaya's dog's name. You'll see what I mean...

Kimi ni Todoke can be viewed on Crunchyroll & Hulu, and has been licensed by NIS America. Episodes 1-38 were observed for this review. Promotional consideration provided by Crunchyroll.