HomeAnime"Punch Line" Throws Its Knockout Haymaker Amidst Some Shaky Rounds

"Punch Line" Throws Its Knockout Haymaker Amidst Some Shaky Rounds 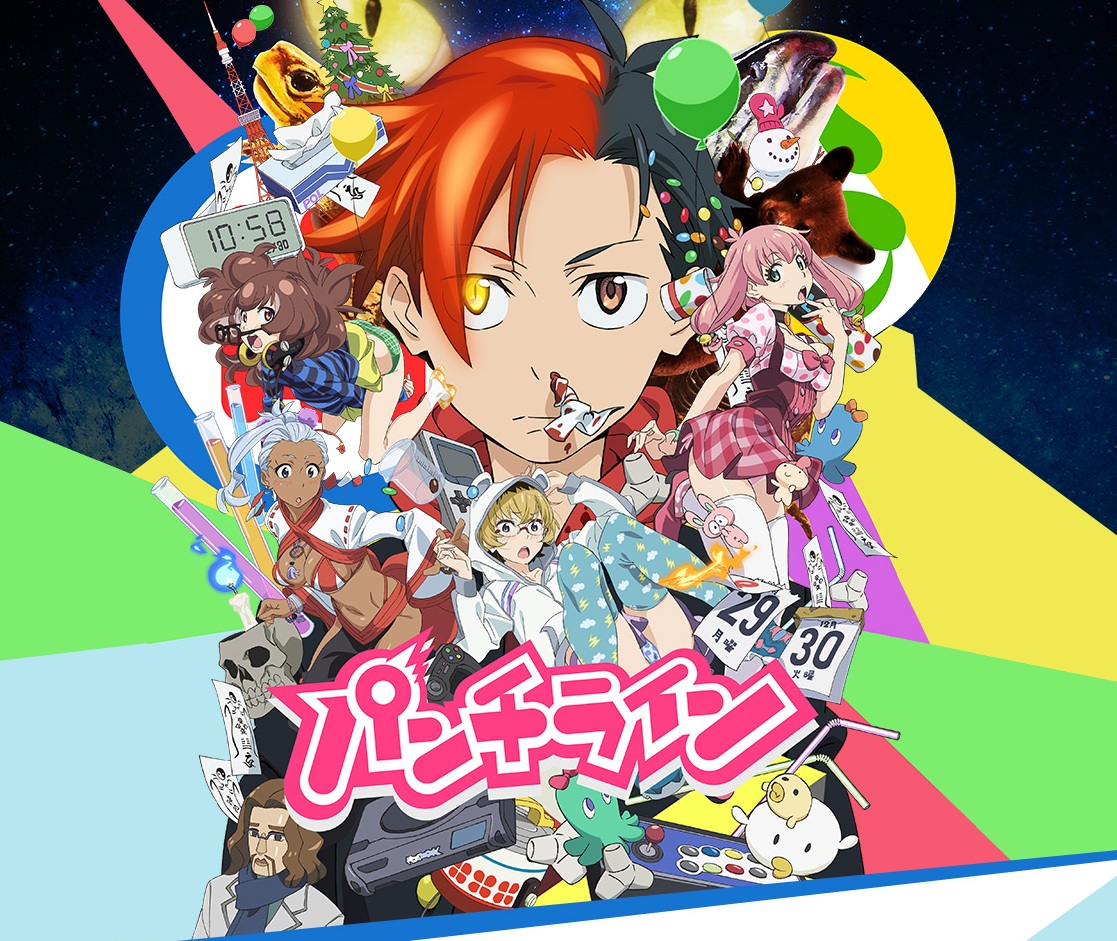 "Punch Line" Throws Its Knockout Haymaker Amidst Some Shaky Rounds

Whenever I see the name noitaminA attached to an anime project, I can just about expect to see a high quality program that will leave me thinking in wonderment soon after an episode ends. This is where the likes of Honey & Clover, Paradise Kiss, Moyasimon, Eden of the East, and Terror in Resonance have aired on Fuji TV, cementing themselves as cornerstones of what the anime genre can accomplish. So when word got out about an upcoming noitaminA series called Punch Line, I was left confused. A premise revolving around a guy who may accidentally blow up the world if he sees women's panties does not sound like a thinking man's anime; rather, it sounded far from the opposite.

Oh how I shouldn't have questioned noitaminA's decision to air Punch Line. However it does require a little patience to fully appreciate what they wish to showcase.

When the show begins we find the characters of Yuta and his neighbor Rabura find themselves in a hijacking situation. Enter Strange Juice, a super heroine who takes care of just about every hijacker onboard. Upon seeing his neighbor's panties Yuta powers up and takes care of the main villain on the scene. Passed out onshore a strange objects flies into his body, sending Yuta's spirit elsewhere and forcing him to watch the next few days unfold as the end of the world becomes more imminent. 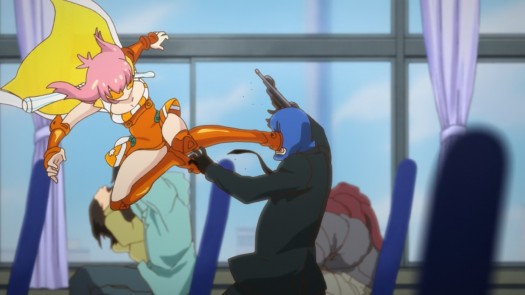 As he watches everything Yuta is taught about the ways of the spirit form via the ghost cat Chiranosuke, who has a habit of telling half-truths to the confused lad. Whilst watching fellow flatmates Rabura, Mikatan, Ito, and Meika he discovers some hidden truths about every one of them, with Mikatan sharing something big from his past. However due to his strange nature Yuta cannot look at women's panties twice in a row, for the earth will be destroyed if so, which makes the task more difficult seeing as all his apartment dwellers are female.

Initially I was very confused by Punch Line. Little did I see made much sense, almost dipping itself into a sort of slice-of-life show that didn't have an ounce of plot to carry over towards the next episode. Sure, there were some funny tidbits involving Ito's pet bear cub, Rabura's failed attempts at exorcism, and some sarcastic wit from Chiranosuke mixed with his obsession with certain cat videos, but it just wasn't grabbing me like most series I've come across on the noitaminA lineup. However I decide to soldier through to see what was making Punch Line tick.

That's when Episode Five appeared on my radar. In it Yuta needs to prevent Ito from being murdered, which then leads to a showdown with a masked robber that appeared in a previous episode. Everything starts making sense in the following episode, where the plot points are laid out, and we discover what it was that knocked Yuta out of his body days before. Then the fangs of Punch Line began to show, and things that seemed ordinary and dull suddenly lined up with what Yuta needed to accomplish in order to save not only his friends, but the rest of humanity.

It takes half of the series' run to start appreciating what Punch Line is, but when the curtain's been fully raised and everything is out on the table to view what happens with these characters and how it affects their surroundings becomes all the more exciting. While the plot point of Yuta powering up when he sees ladies' undergarments sounds like an excuse for fan-service at every corner, the anime surprisingly doesn't shove these crotch shots and ecchi humor in the viewers' faces. (In fact you'll probably go a full episode or two without seeing anything naughty, outside of the quick animations bookending a commercial break.) 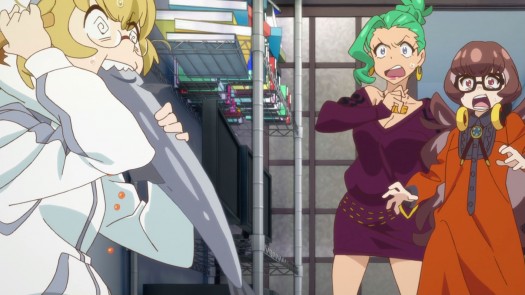 What Punch Line wants to do is be intelligent, and it's when you see the back stories of the likes of Mikatan, Meika, and Yuta when it hits its stride. How all three of these characters are connected bring much depth, from Meika being discovered to being a robot sworn to protect Mikatan to Yuta & Mikatan's childhood past where their past selves go through some pretty shocking changes, the kind of which I do not wish to spoil here. As shocking as it sounds I was very much taken aback when the full picture of what Punch Line was trying to accomplish was unveiled, teaching me a valuable lesson on not judging an anime solely on its premise.

A great cast of voice actresses make up the residents of the Korai House apartment, with Marina Inoue's Yuta taking center stage whenever the character's on screen. His confused mindset and willingness to get his body back & help with the situation at hand plays well with the sarcastic mentality that Yuri Yoshida brings to the feline Chiranosuke. Sora Amamiya brings a go-getter attitude to Mikatan, while at the same time showcases her moments of weakness in a very relatable light. As Meika, Rie Kugimiya takes her usual tsundere tone and transforms it into one built with confidence and a willingness to succeed. Minako Kotobuki plays Ito with a melancholy mentality, but knows when to show her true colors at the precise moment. 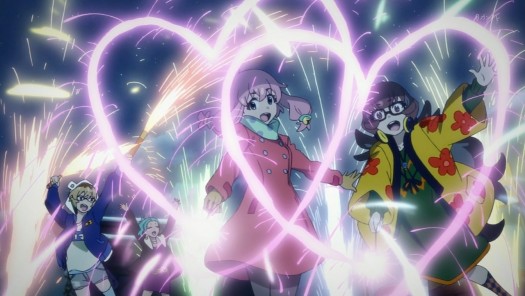 Studio MAPPA (Kids on the Slope, Terror in Resonance) takes helm of the animation production, with action sequences coming to life in vibrant colors and hues that help to make all the action seen on the screen more exciting than it already is. However sometimes the look of the characters seem to be a little faded, as if a small bit of fog surrounds the world at all times. For the most part it all looks great, with the attention to detail in every flatmate's room showcasing their personalities to a T.

The show's soundtrack, composed by Tetsuya Komura (known for his works with Namie Amuro, Nile Rodgers, and Yoshiki just to name a few), has plenty of high moments, especially during battle sequences and flashbacks regarding Yuta and Mikatan. Opening theme "PUNCH LINE" by Shoko Nakagawa and pop idol group Dempagumi.inc captures the spirit of the show, with a cheery and militant tone masked by cutesy pop vocals. Its end theme continues on with the happy tone in the form of "Honey Honey Honey" by AyumiKurikaMaki, a trio of girls who perform in bear costumes. (A quick search on YouTube will lead you to discover some lively shows by this group, so keep your eyes peeled when they inevitably blow up on the music scene.)

If Punch Line has taught me something, it's this: never second-guess a series chosen to air on noitaminA. It's a lot smarter than I initially gave it credit for, and while it may never stand toe-to-toe with the likes of Nodame Cantabile or Kids on the Slope it does in fact deserve its place among other past series that have aired in that famed time slot. While it does take awhile for it to really get going, those patient enough to stick around to see what Punch Line is all about will no doubt be rewarded with some great action, humorous dialogue, and some deep exposition that'd make your head spin. This may be noitaminA's take on a dumbed-down comedy, but even then Punch Line knows how to outthink most of the perverted anime out there.

Punch Line can be viewed on Crunchyroll, The Anime Network, and Hulu, and has been licensed by Sentai Filmworks. Episodes 1-12 were observed for this review.

Mighty Leaderboards For All In Ste...