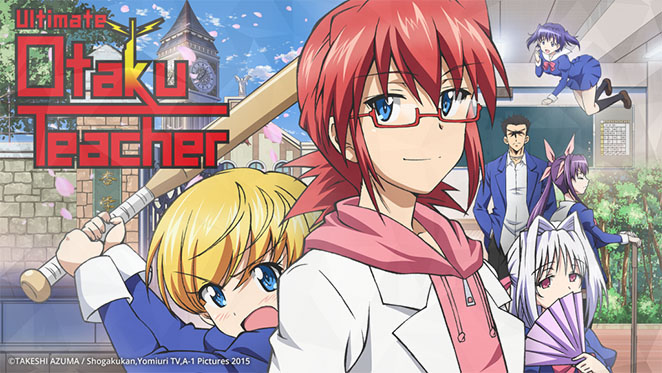 YD: yearn to do. It's the way of life for most of us that have grown up in the 80s and 90s, where the only things we wish to do are the things we feel are worth accomplishing. Everything else is deemed either meaningless or too hectic to even deal with. This brings us to this Spring's new anime series Ultimate Otaku Teacher, a show whose subpar visual appearance is overshadowed by a surprisingly well-designed story.

Ultimate Otaku Teacher follows a young genius named Jun'ichirō Kagami (Hiroshi Kamiya), whose brilliant mind has led him to a life of spending all day watching and reporting on anime. Fed up with his sluggish behavior his sister Suzune (Rena Matsui) gets him a job as a teacher at a nearby school. Reluctantly he takes the gig, after finding a greater purpose: to help out students that have been led astray by the dictation of society. His tactics grab the attention of Icho Academy chairperson Koyomi Hiiragi (Suzuko Mimori), who yearns to make her school a whole lot more interesting by adding Jun'ichirō to her staff.

Each episode (or two) focuses on a student that has by shunned by the world around her. An aspiring voice actress bullied by her former peers; a classroom bully whose former baseball days ended prematurely; a gifted student who faces expulsion due to her career in the maid café business. Each time a troubled youngling comes across his path, something about them draws Jun'ichirō to wanting to help them, all in a very unique way.

To be fair, Ultimate Otaku Teacher isn't a fairly new presence. We've seen anime, manga, and drama do this before, especially in such classics as Great Teacher Onizuka and Gokusen. A person forced out of his normal element and thrust into the role of a mentor to stray students. However while Eikichi Onizuka used his strength and attitude and Kumiko Yamaguchi her yakuza knowhow to tutor these students, Jun'ichiro instead uses his brains and skills to offer aid as best as he knows. 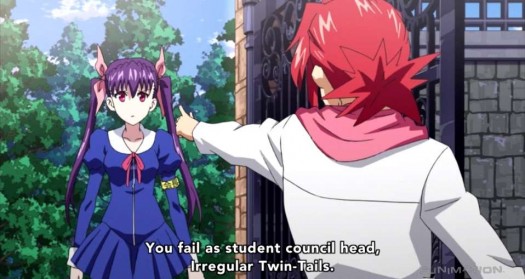 In one episode, a school bully and former baseball player challenges Jun'ichiro to a fight, where the battle at first seems to be taking place within a soccer video game. Come to find out the soccer match turns out to take place in real-life, and it's the skills he learns from the video game that help him to score a victory in quite the ridiculous way. Soon he finds himself being asked to join the school team, giving his life a new purpose. It's all entwined in a fine mixture of comedy and drama.

It's this strong writing that keeps me tuning in each week to Ultimate Otaku Teacher. Yes, it can get a tad bit After School Special-y in some parts, but it soon finds itself wrapped around clever jokes and spot-on philosophical points about the world and society we live in. It's in Kamiya's performance as Jun'ichiro where the show's strengths truly lie on, and he pulls off the character with a fine mixture of charm, humor, and passion. 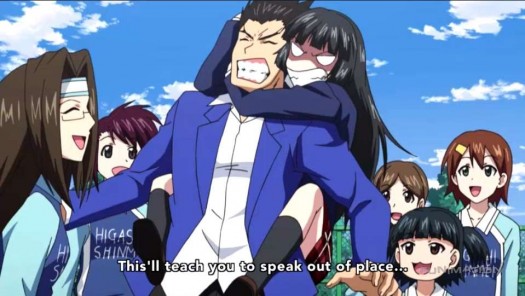 Sadly it's hard to look past the visual aesthetics of this anime, which look too bland for its own good. It comes as a surprise, seeing that A-1 Pictures has had a pretty good track record thanks to such series as Black Butler, Sword Art Online, and Night Raid 1931. The same can be said about its soundtrack, whose composer Ryuuichi Takada seemed to also go down a very typical anime comedy route with its cues. At least its end theme "DREAMIN'," performed by Tokyo Performance Doll, is both catchy and has a very positive message in its lyrics.

Ultimate Otaku Teacher may not be the most noticeable anime to come out of the woodwork this year, nor is it the most original. What it is, though, is an enjoyable show with a very likable protagonist who uses unique ways to touch the lives of his students, even if he'd rather be working on his anime blog. Just take it for what this anime brings to the table: a nice little fun take on both society and the education system as a whole. It may never reach the heights of GTO, but it's sure to win a few hearts in during its run. After all, that is what it seems to yearn to do.

Ultimate Otaku Teacher can be viewed on FUNimation.com and Hulu, and has been licensed by FUNimation Entertainment. Episodes 1-7 were observed for this review.

Requiem for Cicadas In First &quot...