PAX EAST 2014 | Boston Embraces The Horrors Of "The Evil Within"

PAX EAST 2014 | Boston Embraces The Horrors Of "The Evil Within"

Shinji Mikami has made it a career of scaring gamers at around every corner. Since directing the first Resident Evil title players all across the world have come to expect the things that unexpectedly crawl out of the darkness whenever his name is attached to a project. Now leaving Chris, Leon, and the rest of the Raccoon City crew by the wayside Mikami is looking to pen a new chapter in survival horror, one that is tied together with barbed wire and human flesh. With The Evil Within, not only do the core mechanics of survival horror come back into play, they strike with a pure vengeance.

At PAX East viewers were given a demonstration of two levels from the upcoming release. The first had Detective Sebastian Castellanos walking amongst a city devastated by disaster. Streets are flooded, walls are crumbling, and the ground below your feet sinks at every step you take. As Sebastian roams the city, you get the sense that something else out there is out to kill you, and it's not Mother Nature. First, though, you need to walk through the hollowed city, as each moment you plop your foot down leads towards a pathway of both physical and mental disaster.

Once you find your way out of the labyrinth of crushing walls and flooded cities you come across the first batch of human-like monsters. Are they of the walking dead, or are they merely infected with something that's taken over their body and senses? As there are a mixture of various types of these beings it's hard to decide. Some merely run towards you, whereas others have either glowing eyes or will even attempt to shoot you down. At the very least Mikami has made these beings different from one another, meaning that a certain strategy will be needed to take each of them down. On some occasions after shooting them the option of burning their body is given, which can lead towards earning more ammo and other much-needed items.

When shooting these human-like creature the gore factor comes in play wonderfully. With one shotgun blast a firefighter is turned to mince meat, whereas a nice sniper rifle shot to the head sent a salaryman's brains flying through the air. One of my favorite parts involved two of the glowing-eyed creatures trying to take Sebastian down, only for them to be shot between the legs before being doused in flames. You wouldn't expect less from a Mikami title.

Towards the end of the first demo you'll find yourself taking on a water monster, who can be outsmarted by throwing bottles into the water to distract it as you try to swim to safety. Unfortunately the Bethesda rep playing the game merely wanted to show us what happens if we failed, which -- of course -- is the sight of Sebastian being torn to shreds, with his remains pulled to the bottom of the water. It was a great jump scare to end the first half of The Evil Within presentation.

The next half of the demo featured Sebastian within the asylum. Poisonous gas is emitting through the area, and it's up to you to shut it off before you suffocate. While trying to shut off each valve of gas the screen becomes static-y, resulting in the emergence of Box Man, a monster created by man. With its head being closed shut with a tiny safe tied closed by barbed wire the Box Man lunges at you with all its strength. You can take it down with a few shotgun shots, which ends with the creature's head exploding within its metallic confines and pouring out of the small opening the door has left exposed. Towards the end of the second demo Sebastian finds a lever near his surroundings, pulls down on it, and sends a weight of spikes plummeting down onto Box Man, trapping it and seemingly putting it out of its misery. 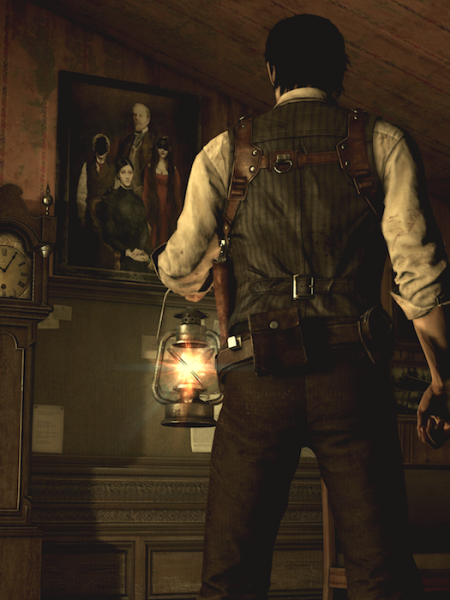 The question remains, though, is how many of these Box Men there really are. Are there dozens of them throughout the game, or is there merely one? I ask this because of how the creature can teleport in The Evil Within. In one sequence the creature intentionally kills itself, only to reemerge from behind to try and take Sebastian out. This has led me to believe that only one of these creations exists throughout the game, and that it has the power to teleport whenever it likes via death. However the truth behind the creature remains to be seen.

From the thirty-minute presentation the team of Tango Gameworks and Bethesda are looking to give us the survival horror experience many of us have been clamoring for since Resident Evil 4. The Evil Within's atmosphere alone sent chills down my spine, as I waited at the edge of my seat for something to spook the daylights out of me. I will say that, unlike a game like Outlast or the upcoming Daylight, Mikami's latest does give you a sense of hope (albeit a small bit) as you go through this maze of torture and horror. Where it will lead you towards in the end may still be a mystery, but at the very least this gruesome adventure looks to be walking a nice thin line between fun and terror, and that's exactly what I look for in a survival horror video game.