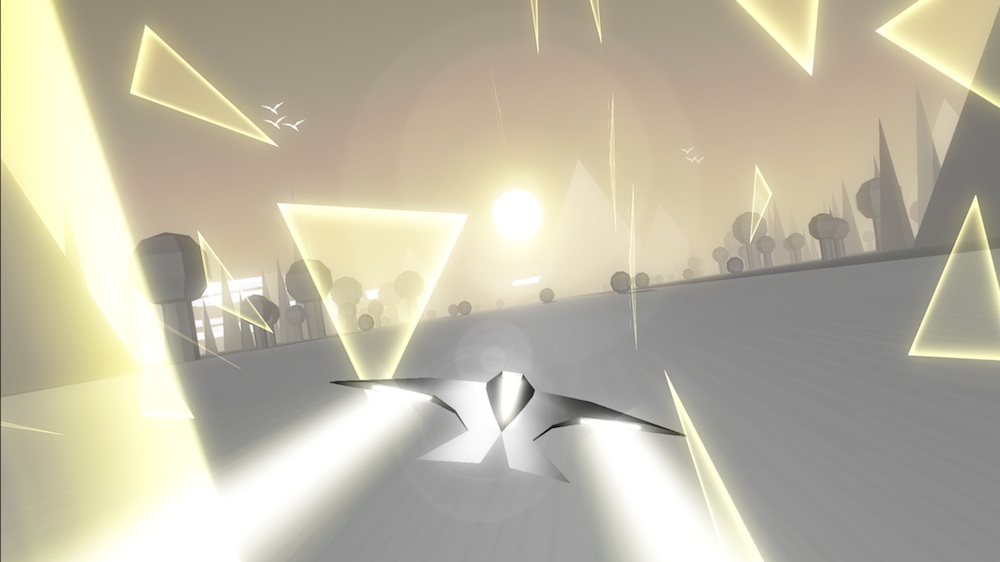 Let me get the biggest (albeit minor) complaint out of the way right here and now: Race The Sun isn't the best-looking video game on the market. Even though its appearance is more of a nod to the days of StarFox 64, it's still a pretty plain-looking video game, with only minimal amount of flair and the whatnot. It's not very colorful, nor is it the least bit eye-catching if one were to look at pictures of it.

Still with me? Good, because now I'm going to tell you why Race The Sun is a damn fun game to play!

A somewhat infinite flier Race The Sun has you go breakneck speed towards a sunset, as you maneuver throughout lands filled with pyramids, walls, windmills, falling debris, and the occasional power-ups that will help you out with speed and agility. On occasion you'll come across alternate world gates that have you flying through space and avoiding meteors and other space junk.

This game is fast, plain and simple. Using just the right and left keys to move you'll be spending the majority of the time swaying back and forth between giant objects, collecting point multiplier triangles, and timing jumps right in order to gather more power-ups in higher places. Once you think you have the level down, you have only until the end of the day to fully complete it, as the layouts randomize day-to-day. If you think you have Race The Sun beat at the get-go, then you'll be sorely mistaken.

Playing Race The Sun had my body jolting as I evaded small corners, grazed walls, and passed under windmills. It brought to mind not StarFox, but rather the likes of Cruisin' USA and Pole Position as I found my body moving at will with every turn I made, something I find myself rarely doing these days with the majority of racing-sim games I go hands-on with.

Even after I find myself crashing into a wall my instincts automatically had me clicking on the "Retry" button as I found myself eager to jump right back into it. Race The Sun gives off a sort of rush that's not often found in most of these AAA-titles (not to mention the plethora of free-running games we see on our mobile devices). A game that looks so simplistic, but at the same time contains an element of spirited fun that many other titles fail to truly grasp.

If you find yourself in need of a change of pace, you can try your hand at creating your own worlds and testing them to see if they're more difficult to handle than the regular modes. As of this writing you cannot share the levels on Steam, but an update will soon be fixing that. You can even check the scores of others, and see if you can become the top solar flier around.

Race The Sun may not be the prettiest game of the bunch, but it knows how to give its players a fun and memorable experience that will want them jumping back in without hesitation. With its unexpected level layout and fast-paced flying techniques this game will give you many, many hours of flight and fancy-free joy.