HomeAnime"My Mental Choices" Say To Steer Clear Of This Comedy

"My Mental Choices" Say To Steer Clear Of This Comedy 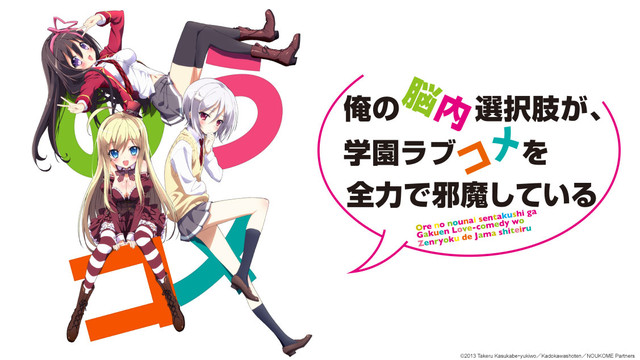 "My Mental Choices" Say To Steer Clear Of This Comedy

Imagine if you were stricken with a strange ailment, one that requires you to make a choice at any given time. These choices range from the deranged to the very nonsensical, and if you don't decide it could pretty much kill you. That's what happens to our protagonist Kanade in this past season's My Mental Choices are Completely Interfering with my School Romantic Comedy.

For almost a year Kanade has been forced to make an ass of himself over what is called Absolute Choice, where he must choose between two tasks. These tasks range from smelling a pervy magazine, making off-colored comments about a certain situation, and looking at his classmate's undergarments. One day a beautiful amnesiac named Chocolat falls from the Heavens, telling him that a cure for Absolute Choice is in reach, and can only be rid of it by completing a few strange and unappealing missions.

My Mental Choices has a nice little premise: give a guy a weird tick, then have him act out strange tasks in order not to succumb from it. The problem here, though, is that the anime undermines the viewer by sticking with the lowest forms of tasks and tries to push it out there as comedy. Yes, there are many great examples of low-brow humor that work wonders, but the key is to be clever with delivery (similar in vein to how the likes of Go Nagai and Nabeshin do it).

This anime is not even remotely clever; in fact it's a disservice to one's brain cells. What My Mental Choices does is take fan-service and try to push that out as comedy. A flung skirt, an angled boob shot, and nudity in general isn't funny as is. It needs to be placed in a situation where you least expect it. (Benny Hill was famous for making fan-service side-achingly funny, using tactics you'd never expect and jokes that made the whole viewing experience worth it.) Unfortunately this anime likes to deliver the "punchline" before the first sentence of the joke is even uttered, making the whole given scenario a complete waste of time.

It's a shame because My Mental Choices has a nice set of characters in the show. Kanade is the buffoon that people should be able to relate with, and his antics should be able to make you laugh and also feel bad for. Chocolat has some cute characteristics, and her canine mentality could've worked well in another anime setting. The tsundere Yukihira has some of the only funny dialogue, using wordplay that actually translates well in English as it does in Japanese (a rarity in the Japanese pun realm). As for the hyperactive Oka, while a somewhat good character her antics just don't fit well with what happens in the show. (She just seems more like a less ditzy Chocolat.)

It's unfortunate that these characters have been put in a setting like this, along with a terrible and uninspired script that makes the whole ordeal forgettable after the show is over. There's probably one good laugh in each episode, but it's not worth sticking around an entire half-hour just for that one moment. It's like forcing yourself to watch Dads just to hear Seth Green say that one subpar joke in a sea of horribly unfunny dialogue. (Okay, maybe I'm being a bit too harsh, but then again just because words are harsh doesn't mean they're untrue.)

I do have to admit I cracked a smile, though, when watching Yukihira let her girly self run free when hanging out with her favorite piggy mascot. It's a sweet and heartwarming plot line in one of the later episodes, and initially I thought it would lead towards some much-needed smart writing. Instead the next episode comes around, and we're back to the dumbed down fan-service. My hopes for better plot lines and comedic tidbits were squashed, just like when I watched the next episode of Dads after the one where the doctor dies midway through Giovanni Ribisi's prostate exam. (All right, I'm gonna stop talking about that horrible show, as it's making me feel bad for having to admit I put up with a chunk of episodes.)

It was a smart move by Tokyo MX to give it just ten episodes. They probably knew My Mental Choices wasn't going to be that great, and they just needed to fill an empty spot in the schedule. Sadly an informercial for magic hair tonic would've been preferable than this drivel.

My Mental Choices are Completely Interfering with my School Romantic Comedy can be viewed on Crunchyroll. Originally posted on the ESH EGMNOW Page.