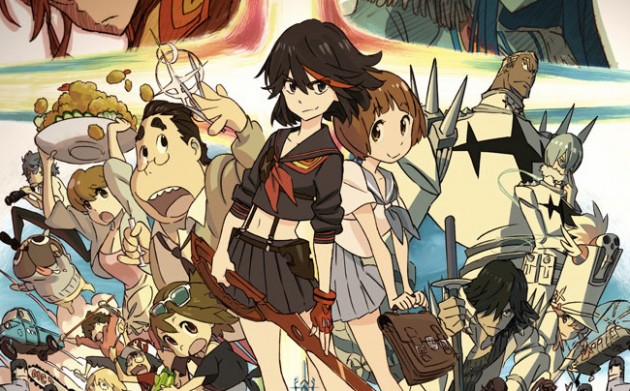 When Hiroyuki Imaishi and Masahiko Ohtsuka left GAINAX to form Studio Trigger they had already an impressive resume under their belt. They first hit the scene with Little Witch Academia, a short film that was so popular that it warranted a fan-funded sequel via Kickstarter. Then came Inferno Cop, a YouTube-broadcasted series that can only be described as the Aqua TV Show Show of anime. Now came the time for Studio Trigger to show their big guns in the form of a full-length anime series.

Thus we are given Kill la Kill, an off-the-wall no-holds-barred fan-service-y show that acts as one of the biggest love letters to anime all-in-all.

Ryuko Matoi (Ami Koshimizu) is a student seeking vengeance. Her father was murdered, and she wants answers, and the people she thinks has something to hide is the student council at her new school Honnouji Academy. Led by Satsuki Kiryuin (Ryōka Yuzuki) she and her fellow members are armed to the teeth, thanks in part to the special Goku Uniforms that give each club president superhuman powers. Fortunately Ryuko has an outfit of her own: a schoolgirl uniform known as Senketsu (Toshihiko Seki), which when powered by her blood can transform into an outfit that's as powerful as it is revealing. With Senketsu and a giant half-scissor that was left behind from her father's murder, Ryuko won't stop for anything to seek out the truth.

Of course, it also helps to have a couple friends by her side. Enter Mako (Aya Suzaki), a fellow student whose positive outlook on life is as high as her batshit crazy levels. Living in the slumps with her family, whose father is a doctor with a high mortality rate ("The dead ones don't sue," he quips), Ryuko is given shelter by them, along with a sort of family love she herself had never experienced. Then there's the homeroom teacher Aikuro (Shinichirō Miki), who is involved with an organization known as Nudist Beach, which at this time their reason for watching over Ryuko is still hiding in the shadows.

Kill la Kill is an anime that pays homage to many things within and out of the anime realm, even more-so than Panty & Stocking ever did. Moments from the likes of Ashita no Joe, JoJo's Bizarre Adventure, Gunbuster, Kinnikuman, and so many others that it'd probably take a whole separate article just to list them all. (Hell, the character of Mako is straight out of any Go Nagai anime, especially Dororon Enma-kun!) There are even subtile nods to American culture, ranging from Clint Eastwood's The Gauntlet to quick background gags featuring characters from Pulp Fiction, Fear and Loathing in Las Vegas, and even a don't-blink-or-you'll-miss nod to Terminator 2.

However even with thousands of homages packed into one series, that alone cannot make a good action program. What's needed is a finely-tuned story, a cast of colorful characters, and a great deal of memorable moments. Fortunately, Kill la Kill delivers all that, plus more.

While the story isn't that original, it's the show's style that helps give it a fresh coat of paint. Vengeance isn't a new topic in any sort of genre, but thanks to Kill la Kill's sensibility (or, rather, lack of sensibility) Ryuko's journey towards the truth will keep you both coming back for more and at the edge of your seat. Most importantly, it's the show's humor that keeps the series nicely intact. Whether it's Ryuko and Mako going through obstacles to reach class on No-Late Day, or when the duo start their own fight club so as to eliminate their opponents while earning a more luxurious life, the humorous storylines help to balance out the totally blatant amount of fan-service that fills the brim of the series.

Visually Kill la Kill brings back to mind the style of Gurren Lagann, especially during the battle sequences. They may not be as detailed and smooth as other action anime series, but its final payoff and vibe help the series to stand out in a very good way. It also helps, too, that the anime has one killer soundtrack, thanks to its composer Hiroyuki Sawano (Attack on Titan, Blue Exorcist). Once you hear the phrase "Don't lose your way" during the end of one of Ryuko's battles you cannot help but feel the goosebumps emerge from your body.

Finally, there is the main cast of the series. Koshimuzu's Ryuko is spot-on with the emotionally scarred aspect of the character, while at the same time brooding with the badassery that is needed during the most epic of battles. Suzaki's Mako is all over the place, which is necessary for a character who bounces around like a nut house resident in a rubber room. When it comes to bringing the voice of Ryuko's Senketsu, Seki brings forth something like a secret father figure, one that feels as pivotal as it sounds. Then we have Yuzuki taking helm of the antagonist Satsuki, who comes off as someone with a cold heart and a walled-up sensibility, with reasons behind the mindset slowly being revealed as the episodes progress.

Kill la Kill is one of those anime series that needs to be seen to truly understand how beautiful of a show it is. Yes, it's unapologetic with its fan-service, and it can be so out there that it'll leave some scratching their heads as to what they had just witnessed, but in the end Studio Trigger's first full-on anime series is one gorgeous piece of eye-popping and earth-shattering visual art. Above all, Kill la Kill is a series that is the very definition of what an action-packed anime should be: violent, entertaining, and -- most important of all -- fearless. If this is what we can expect from Imaishi and Ohtsuka's production company in the long run, then the anime industry should have nothing to worry about in regards to staying on the top of the cartoon action totem pole.

Kill la Kill can be viewed on Crunchyroll and on Daisuki. Originally posted on the ESH EGMNOW Page.