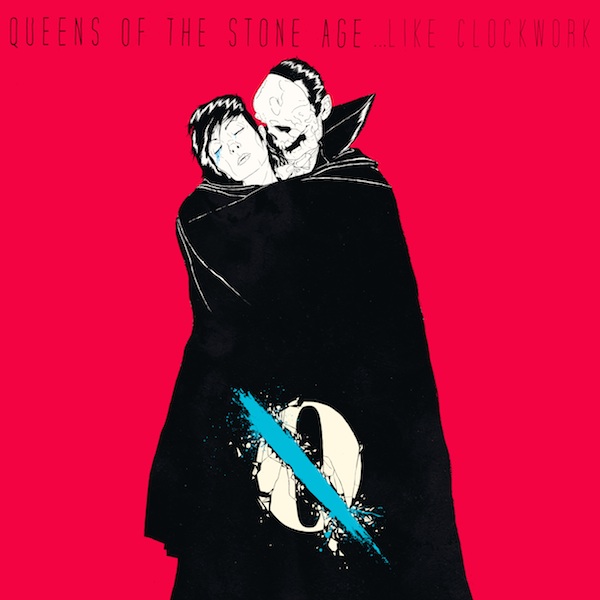 It can be said that the title ...Like Clockwork can be considered a joke about Queens of the Stone Age. The band first teased about recording a new album soon after the release of 2007's Era Vulgaris, only to be sidetracked by Joshua Homme's other side-projects Eagles of Death Metal and Them Crooked Vultures. Then something happened that would put all of Homme's band activities on the back burner: he briefly died on the operating table during knee surgery.

It's a moment like this that can change anyone's perspective on life, which is why when the rest of the band wanted to record again Homme asked everyone to "come into the fog". The rest of the band complied, and through that fog created this long-awaited album, their first on indie label Matador Records. If making music was a sort of therapy, then Queens of the Stone Age no doubt have rebuilt themselves into a $6,000,000 man with this album here.

Gone are the drug-addled days of Rated R and Songs For The Deaf, instead replaced with a heavier rock sound that was first heard in Lullabies To Paralyze. Opener "Keep Your Eyes Peeled" hints at a man stuck in a state of life that he wants out of ("& I know. You will never believe/I play this as though I'm alright/If life is but a dream, then/Wake me up"), with the slow track building up towards darker road.

"The Vampyre of Time & Memory" plays as an autobiographical metaphorical retelling of Homme's brush with Death, with the lyrics showcasing the doubt he had regarding ever getting his full life back. The line "I survived. I speak. I breathe. I'm incomplete." hints at his return to consciousness, only to feel like something's missing. Its simple piano melody over complicated guitar riffs and string sections acts as a soundtrack of sorts to the downward spiral Homme experienced emotionally afterwards.

"Kalopsia," the album's best track, is the moment where the band throws the worries away and takes out the critics by the wayside. Starting off as a man battling depression the track takes a 180 and rams head-on against the doubters of the world. With the help of Trent Reznor "Kalopsia" becomes a middle finger towards the worst kind of changes. (Its line "Copy cats in cheap suits are playing it safe/While cannibals of bad news consume the parade" is a slap to the face to musicians out there who won't even try to better themselves artistically.)

While the album's best moments are in the slower tracks ...Like Clockwork still showcases why Queens of the Stone Age are some of the hardest rockers on the planet. Their single "My God Is The Sun" fools around with the concept of false deities of the past, while keeping itself at the bay towards blissful ignorance towards the fact and fictions of religion. (Either that, or it's a nod to a George Carlin bit.) "Fairweather Friends," featuring Sir Elton John, not only highlights the stylistic playing of his ivory skills, but just how hard and fast Dave Grohl can be while sitting behind the drum kit.

Most importantly Queens of the Stone Age still know how to have some fun, as evident in "Smooth Sailing." With its zig-zagging guitar solos and pimped-out lyrics ("I got: bruises & hickeys, stitches & scars/Got my own theme music plays where ever I are") it seems at first more appropriate for an Eagles of Death Metal album, only to be stamped with the band's trademark vibe towards the end. If there was ever a moment in music that will cause the most panties to drop, it's right here.

At the end of the album its title track puts everything into perspective. The themes of becoming a better individual while not letting fear hold you back are evident in the lyrics, but what makes the song stand out are its instrumental parts. A guitar solo that's straight out of a Pink Floyd back catalogue, a somber piano that's unsure of what the future holds, and a drum marching towards the darkness, hoping that it finds even the tiniest speck of light to guide it. It's a weird way to end an album, but at the same time very appropriate considering the road this band travelled to get to it.

Queens of the Stone Age are known for giving their all, and ...Like Clockwork is no exception. However for the first time, though, it appears the band gives one other thing: a fuck. Whatever this may spell for the next chapter of Josh Homme and company is still up for debate, but one thing's for certain: not even Death can keep a good band down.

KEY TRACKS: "Kalopsia," "My God Is The Sun," "Smooth Sailing"