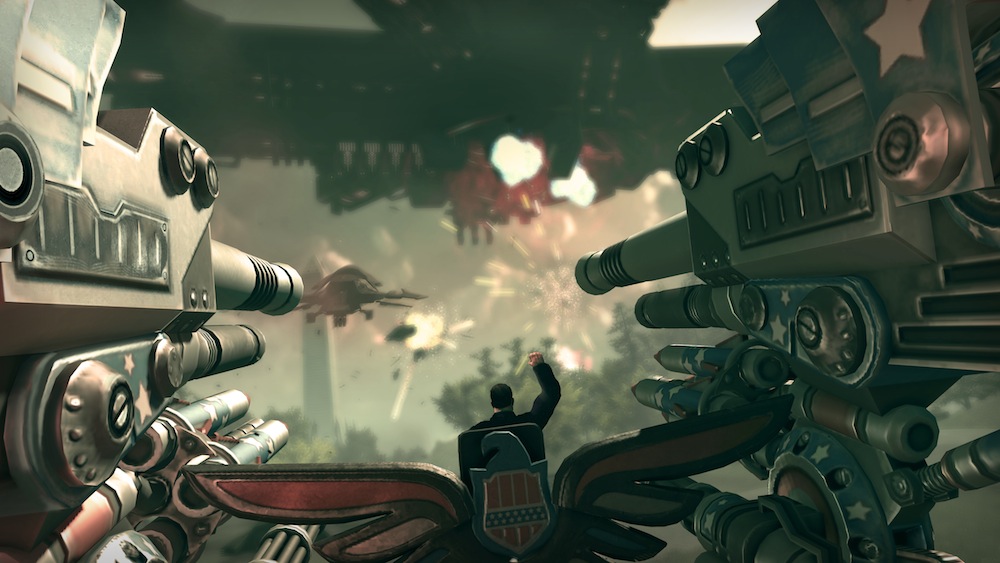 When we last saw our anti-heroes in Saints Row The Third the area of Steelport was brought back under their control. Since that time the Boss has taken over the entire country, becoming the American President with a 20% approval rating. There are bigger problems, though, in the form of an alien race bent on world domination.

At E3 this year I went hands-on with Saints Row IV, and for thirty minutes mass anarchy and violent hilarity were in the forefront of the game. You start off by walking towards a press conference, while the new additions to the White House (strippers, tigers, big fat bodyguards) are seen in the background. Along the way you can choose to either cure cancer or end world hunger, punch a rotten politician in the face or nuts, or high-five one of your pals regarding a Knight Rider marathon at Camp David. As Mackenzie is tossing around "bad" rumors regarding the changes of the Pledge of Allegiance the aliens strike, kidnapping all the Saints around you. 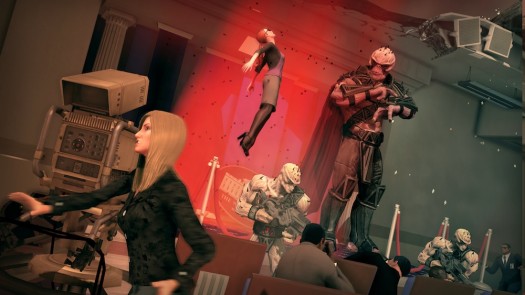 From here the Boss begins shooting alien baddies while taking control of the situation at hand. Once he reaches the outside area he straps himself into a massive cannon system, firing at all the alien ships that come across his way. (A little nod to Space Invaders was a nice touch.) The alien leader crashes, and the President jumps into the ship to try and beat him down. Unfortunately he is not successful at the matter, and the scene blacks out.

Soon as this mission was over I was given the chance to roam around the alien version of Steelport, with some of the higher-end weapons and power-ups unlocked for the demo. High jumping, gliding, and super punches were on-hand, as well as fast running and telekinesis powers to handle some of the tougher situations. Then there were the two special weapons: a black hole gun that sucks anything around it into nothingness and, of course, the dubstep gun. Holding down the RT button the dubstep gun will make everyone the weapon's pointing at break dance to death. 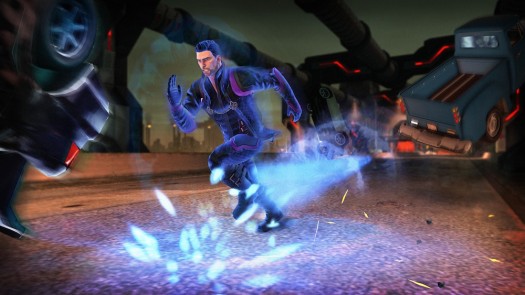 I then tried out one other mission: Professor Genki's Mind Over Murder. Here you are part of a game show where you use your telekinesis powers to throw people, cars, and costumed character heads through specific targets, with a four-minute time limit to complete. As you are doing this the Furry gang appears to try and stop you with brute force, but with your new psychic powers you can use them to your gameplay advantage. It's off-the-wall mad, especially when you've got the human and alien commentators bantering back and forth with some funny comments.

So far Saints Row IV is everything I've hoped it would be, from the zany action and hilarious dialogue to the kick-ass weaponry and powers that you'll be able to unleash. Come August 20th gamers everywhere will surely be ready to pummel some aliens and unleash a sort of mayhem that is both cool and funny to watch as it is to play.

The LowDownLoad: "Call of Jua...