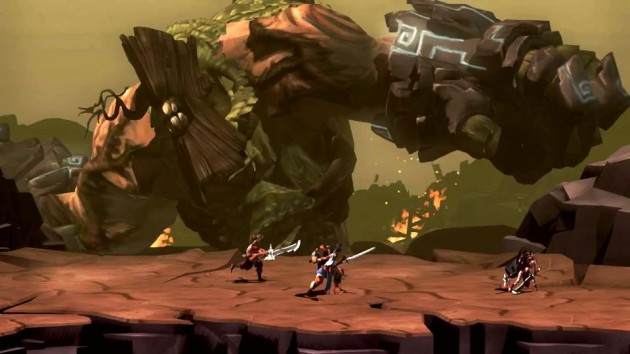 Because I am new to this series I wasn't exactly sure what to expect from Sacred Citadel, a spin-off title of the mostly-PC-based Sacred series. All I knew was SouthEnd Interactive was developing it, a company who moved me to tears with 2011's ilomilo. This alone raised my expectations of the game to a high level, so does the final product merit these promises?

Sacred Citadel has you and up to two other players uniting against an evil that threatens your peaceful kingdom. The evil Lord Zane and his Ashen Empire have created an army of Orc henchmen known as the Grimmocs to wage war against the Seraphim. As you progress through the worlds you'll face off against massive wolves, flying acid-spewing creatures, and warriors with magic on their side.

Players can choose from four characters: the strong Warrior, the quick Ranger, the powerful Mage, and the magical Shaman. Each character brings with them a unique battle style, but with the same amount of power to make sure you can beat the game with any of them. As you progress through Sacred Citadel and defeat more enemies you'll earn new weapons, armor, and gold that can be used in the village market to buy elixir, power-ups, and even make betting wages with one of the townsfolk.

As you level up through the game not only will you gain access to the weaponry, but you'll also learn new combos. These combos can range from something small like another kind of slash maneuver to the more powerful, fiery blows to the enemy soldiers that surround you in the game. It's these combos that help keep Sacred Citadel from being repetitive, a mistake many of these hack-and-slash titles have made in the past. It may take some time to learn them all, but once you've got most of them memorized these combos will unleash some beautiful carnage.