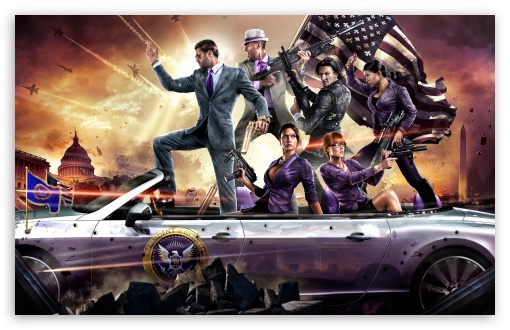 Saints Row The Third was one of the craziest sandbox games ever concocted, so how would Volition top what they managed to pull off last time for their fourth go-around in Saints Row? Oh where to begin? 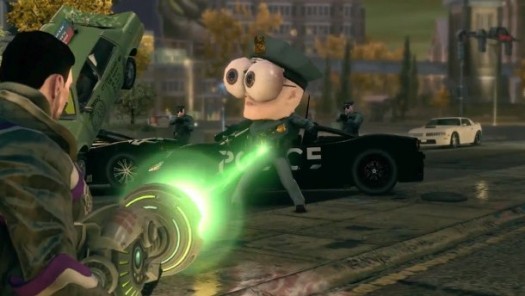 There are a plethora of new weapons that your Saints leader will be able to get his scheming hands on. One of the first ones we got to see was the inflatable gun, which when fired at a random person transforms them into a Macy's Thanksgiving Day Parade float before exploding into intestinal confetti. The dubstep gun forces everyone around to drop like the bass and uncontrollably dance into chaos. These weapons can also be custom-made, looking like almost anything you want. Do you think your bazooka should be shaped like a guitar case? If so, it can be done! No word on if the Penetrator will be making its return, although Volition knows of its popularity.

Throughout the faux Steelport (as you are on an alien clone city of your beloved city) there will be superhero power-ups you can collect to go full Superman on everyone around you. Two of the powers showcased in the demo were super speed and flying, the latter which can be used to deliver a massive ground-crumbling fist-bump if thrown from above. You can even use super wreslting maneuvers like the Stone Cold Stunner and the Huricanrana to take out fellow citizens. 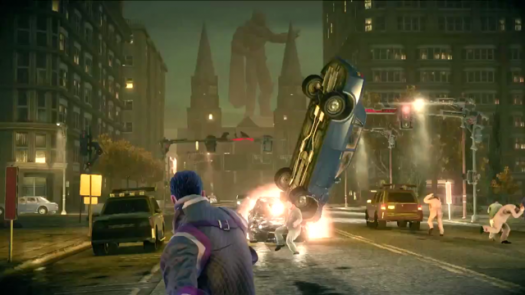 As there are no rival gangs this time around, the main antagonists of the game are the alien forces that have captured your planet. Fortunately there are more kinds of UFOs to deal with than there were gangs in Saints Row The Third, so there will be plenty of danger to deal with throughout the title. There will also be regular cops and other authority figures to deal with, but with you the leader of the free world it won't be like you can monster truck your way around their rules (and I mean that in a literal sense).

There is a bit of bad news, however: Burt Reynolds is no longer the mayor. However the guys at Volition have assured us that there will be some great cameos throughout the game. The radio stations are currently being worked on, as the musical elements are the last thing they'll be working on in Saints Row IV. One of the coolest parts about the new game will be that you can bring your created character from Saints Row The Third into the new title, and vice versa. Of course if the clothing you have in either game isn't in one another, you'll only be able to import the character build.

Saints Row IV is due to be released on August 20th on PS3, Xbox 360, and PC. More information will be released on the game within the next couple months, with the entire lowdown revealed possibly by this year's E3.