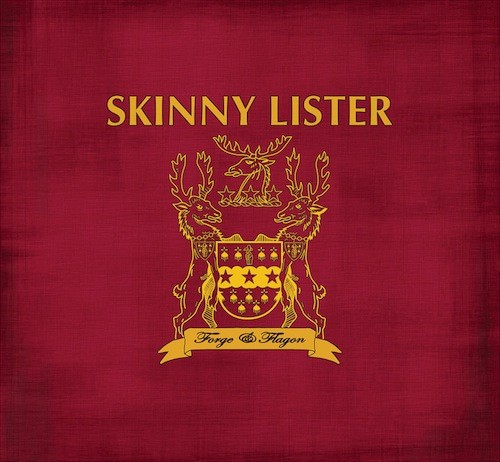 It's something when an opening act has the gusto and power to nearly steal the show from the headlining act. An event such as this happened last week when we went to see Flogging Molly, when a five-piece band from London, England came marching onto stage and took the audience by storm. Called Skinny Lister the group tore through their tracks with zest and the sort of domination one would seem more fit for a festival crowd of 30,000. The band proved themselves as an amazing live act, but does that energy tread well in a studio album? In Skinny Lister's debut album Forge & Flagon the answer is a resounding yes.

Released last year in Europe (but just last week here in the States thanks to Side One Dummy) Forge & Flagon is 35 minutes of sing-alongs, sea shanties, and a vibrant spirit that will have you wanting to grab the nearest lass and dancing the night away. The opener "If The Gaff Don't Let Us Down" starts off slow, but after thirty seconds the drinking party begins. The cue shouts from the band members adds onto the lively atmosphere Skinny Lister have brought to this album. "Rollin' Over" is a thrilling love song that has one coming back to their lover as quick as possible, with "Trawlerman" following as it nods to the hard-working fishermen of the world.

It's a beautiful thing to hear when a band can simply sing in a raw setting with only a foot stomp keeping with the beat, as evident in the group's arrangement of the traditional shanty "John Kanaka." You may find it hard to not sing loudly when this song hits, and in the proper setting those around you may just want to join in. If you're lucky enough to have "Seventeen Summers" play right afterwards, you may just have lovely dance party unfolding before your eyes.

The album's most arresting moment comes right at the end in "Colours." Here vocalists Daniel Heptinstall and Lorna Thomas duet in such a way that breathes a sort of light that was once thought to be lost in the darkness. Its lyrical content is simple, but the imagery it portrays through the instruments brings to mind something you'd only find in a Miyazaki film. There was no better way to end this album than with this gem.

Forge & Flagon is the most impressive debut to come around in a long time. Carrying the same torch that Mumford & Sons and The Swell Season hold, Skinny Lister takes a most classic of sounds and not only makes it new, but extremely exciting. Even though it's only February, we may already have found the best new artist of 2013. Raise your glasses, Skinny Lister!

Skinny Lister are currently on tour with Flogging Molly and Dave Hause. For tour dates, check their official site. (And no, sadly, the Skinny Sisters aren't partying with them on this tour.)

Hilarity On The Agenda For "S...