It's A Nonstop Madhouse "Disco" From Emperor Norton

It's A Nonstop Madhouse "Disco" From Emperor Norton 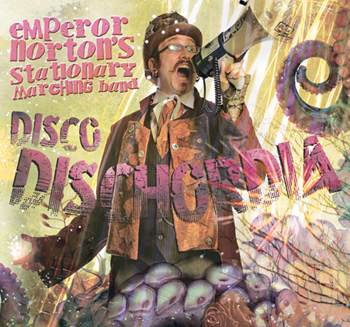 When Emperor Norton's Stationary Marching Band first hit the scene with its debut album Reign of Revelry in 2010 their sound was unmatched. Like a blend of oompah and pomp with a sprinkle of pure insanity this steampunk-based band had the undeniable talent to make one's heart beat to the rhythm of their polished brass section. This year the zaniness returns in their second album Disco Dischordia.

Liked the famed piper of Hamelin ENSMB hypnotizes the listener with its opener "Crzi Voz," an insane party that demands the hips to shake and the arms flap like eager birds towards a defenseless worm. In "No Me Sa Sa" the horns tickle your brain as it brings about the sort of exciting energy one may see at a three-ring circus. (They are part of the Boston Circus Guild, after all.) Imagine fire-breathers dancing on hot coals while sexy girls juggle high above the tightrope, and you'll only get a mere percentage of the sheer fun this (and many of the other tracks) Emperor Norton can produce. The saxophones and the Ron Burgendy-like flute take center stage in "Jungle Hunt," which calls upon Marx Brothers-styled shenanigans and perhaps a little funkier James Bond on a mission to save the world in Mardi Gras fashion.

It's songs like "Pachycephalophilaphobia" (try saying that three times fast!) and "Davis Square Double-Time" where you can just envision the undeniable blast the entire band had while going pure bonkers on their instruments. The carefree spirit of the entire crew spills through the speakers, bringing undeniable happiness to anyone who listens to it. "Merkvirdirlibn Mishegos," meanwhile, is the ideal chase sequence song, perfect for Benny Hill-like tomfoolery or causing anarchy in the style of those furry video game bastards known as the Rabbids. The album's closer, "Disco Balls (Hot Pants)," starts off like a 1970s cop show opener, only to transform itself into a musical fistfight that's straight out of Cowboy Bebop. 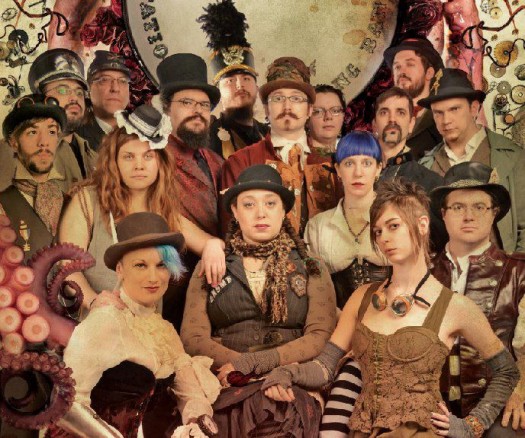 ENSMB knows how to cool things down, too, as evident in their song "Mysterious Object." Here the band performs a soulful tango that calls to mind the score to a Sylvain Chomet cartoon, its tone foreshadowing and sinister while keeping to a time of romance and heartfelt desires. "I Forget" shows off the band's more sexier side, playing like a feather dance in a classy burlesque joint. (Don't be surprised to see some clothes tossed off left and right when this tune is played.)

In the end Disco Dischordia succeeds in just about everything Emperor Norton's Stationary Marching Band sought out to do. It's fun, it's fast, it keeps you on your toes, and above all it leaves your body tied in knots from all the dancing you'll be doing. If you need to get a crazy party started quickly and efficiently, all one needs to do is plop in this album and push play; just be prepared to get trashed in the most colorful way possible.