HomeMoviesSeeing Double In "The Devil's Double"

Seeing Double In "The Devil's Double"

Seeing Double In "The Devil's Double" 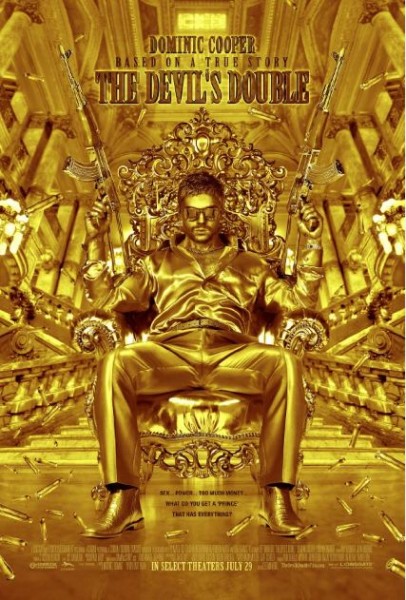 In this messed up world, when you're a leader or a son of a leader, you always need a double. It's always something when you want to make an appearance. Perhaps it's best you do send in your double in case someone takes a shot at you, or at least your legacy.

It sucks to be in a country that's a dictatorship, and also to look like the son of the leader of Baghdad. Not only that it's one of the most psychotic sons...Uday Hussein (Dominc Cooper). The main character Latif Yahia (also played by Cooper) is a Lieutenant in the Iraqi army, and is brought in by Uday to have Latif become his double. That way if he makes an appearance out in public and someone tries to gun for him, it will be his double and not Uday. Latif gets to see more than he ever could, finding out what happens behind the golden AKs of Saddam Hussein.

When you got Uday in your crosshairs there is no way out!

They did an amazing job on the acting in The Devil's Double. In fact they did such a great job with the double effect I thought there were two different actors between Uday and Latif. Lo and behold, it's actually the same actor which is amazing. This movie is so in depth with the actual correspondence between the two characters, even though it's hard to act with one's self in a scene. This movie I was not able to see the whole separation between the two when they were in a room. Beforehand it used be some kind of line in the room, but now they've used modern technology to make it look like there are two Dominic Coopers in same room.

No, that's Saddam playing tennis with himself!

For the story aspect of this movie, the son of Saddam, Uday is a ruthless and insane person who likes to do drugs, go to wild parties, kill, steal, torture, and all the other bad stuff under the sun. Latif is, of course, the opposite. He is a person who fought under the Iraqi army, in the belief of Saddam's dictatorship. Latif sees the wizard behind the curtain of it all, and it really messes with him on the fact that it goes against his major beliefs.

The joker card was an indication to check points that it was Uday.

From the view of Latif you see that Uday kidnaps schoolgirls right out in the open with his group bodyguards. Uday lives the messed up version of a rock and roll life. The American version, of course, is the sex drug rock and roll quick and to the point motif. Uday's version is torture, drugs, sex, more drugs, threaten people with guns, rape, murder, rinse, and repeat. The thing that sucks is Latif is caught right in the middle of it. The bodyguards of Uday told him that his family thinks he died in war, and that if he does anything to contact him they will kill him and his whole family. Because of that he has to sit back and watch as Uday does all his messed up things, from killing his fathers best friend at a party to the point of no return.

Can you tell if there's a line or green screen?

Latif gets to the point where he almost becomes as sadistic as Uday, with rants in the mirror and other such things to make sure he pleases the bodyguards and doesn't end up dying. With everything that Latif goes through this movie is one hardship after another. This is how it is to be stuck in someone else's madness, due to the fact they look like the crazed person. This movie surely opened up my eyes, in part to the whole concept that this movie is based on a true story. This doesn't mean that every single thing that happened in this movie happened in real life. Rather it's the concept that it's very possible that this could of happened the way it was portrayed.

From my research on the side there is a lot of stuff that co-existed with the movie that I watched, which impressed me. However unless it was a documentary of the sick bastard himself, we could only imagine that Uday had messed up a lot of lives due to his selfishness. For this movie's rating I will have to give it a standing ovation and thumbs way up. The Devil's Double was powerful, and a damn near all-around good movie. Cooper, who was recently in Abraham Lincoln: Vampire Hunter and Captain America: The First Avenger, did a phenomenal job on the movie, especially where he had to play two characters in different contexts. My hat's off to you, sir. If you're game, rent this movie,  sit back, and be blown away by what you're going to see.

If you're looking to rent the The Devil's Double, I can always suggest this other film based on a true story: Lord of War. It's about a gun-running son of a bitch that made it big when the Cold War came to an end. The real person finally got arrested finally in 2009 (the merchant of death Viktor Bout). Check it out!