Since PAX East 2011 I have been keeping a keen eye on Reverge Labs' Skullgirls, a 2D fighter that takes various nods from games like Guilty Gear and anime like Ikki Tousen. The final product that has appeared on Xbox Live Arcade and PSN, however, has left much to be desired.

Skullgirls has eight fighters you can choose from, with each one having unique talents and traits that play to their advantages during their battles. For example Miss Fortune has the ability to remove her head, and then use it to attack her foes on one side of the screen while the rest of her body attacks on the other side. The slapstick-influenced Peacock can launch explosive devices towards you, as well as use classic comedic props such as pies and mallets to knock out her opponents. Double, meanwhile, can transform herself into any of the Skullgirls characters and perform their techniques. 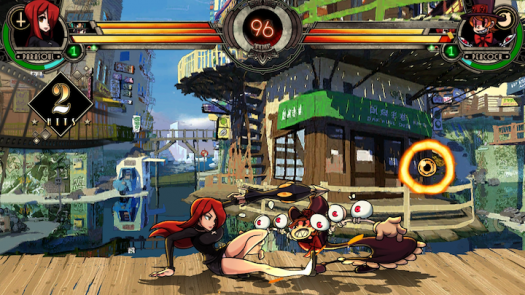 In Arcade Mode of Skullgirls players can choose to play as one strong character, two semi-strong characters, or three regularly-strengthed fighters. While it might be wise to stick to one strong fighter, those who are good with various characters may find themselves wanting to go with the two or three character route during Arcade mode, as the various methods each fighter has can work to your advantage against the other participants you face off with. Story Mode focuses on eight different stories surrounding the fighters, each one linked to the tale of the Skull Heart. The story goes that there is an item known as the Skull Heart that can grant any wish to those who obtain it. However if the one asking for the wish is impure, she will be transformed into the Skull Girl and wreak havoc over the the human race.

Players will be able to unleash combo attacks while fighter, even earning different levels during battle that can lead to more powerful attacks (known as Blockbusters). It was here, unfortunately, where my first problem with Skullgirls appeared. I found it increasingly difficult to conjure up any sort of combo attacks with the way my Xbox controller is set up. The more I played the game, the more I realized that Skullgirls was designed to play more on a traditional arcade stick, something that plenty of gamers (including myself) may not put money down on. 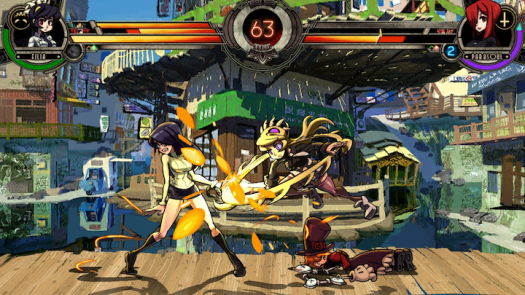 There is a tutorial mode that's supposed to help show how to pull off the bigger moves, but half the time I couldn't perform what they were telling me to do. It also doesn't help that they used code initials instead of the actual A/B/X/Y button names to tell you how to complete the move, which led to multiple times pausing the tutorial and looking at what which code initial matches to each button. Even when I got that down patch the combos would never work. The only way I could pull them off was by going crazy on my D-pad, which I don't like doing in fear of breaking my controller.

Then there is the problem with the AI in Skullgirls, as it can be very difficult to defeat just about anyone in this game even on the easiest mode (known as "Sleepwalker"). The character I have the biggest issue with is Miss Fortune, who for the past few weeks I have been unable to defeat, no matter how many times I go up against her. (I've heard from other gamers online that they've also had issue with her difficulty, making me wonder if there's a problem with her coding.) Half the time I faced her I couldn't get a single punch in, as she spent the entire match doing combo after combo to beat me lifeless. It's one thing to add a challenging element to a fighting game, but Skullgirls can become beyond frustrating. 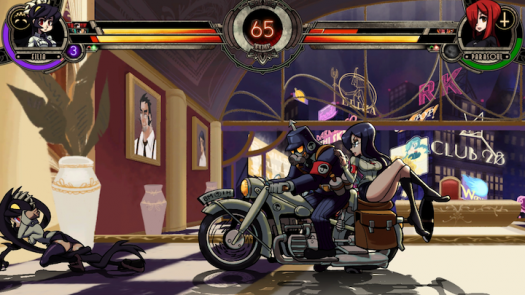 It's a fact that Skullgirls looks great. The hand-drawn anime visuals add a great style to a genre that hasn't seen a look done this well since Wii's Tatsunoko Vs. Capcom: Ultimate All-Stars. Each character moves around as fluidly as a big-budgeted Cartoon Network series, with the Blockbusters stealing the show at every corner. The voice acting can be quite hilarious at times, with some lines fitting perfectly with the character that you're about to face. (The "cheeseburger" taunts you say against Miss Fortune had me on the floor laughing.) The soundtrack from famed Castlevania composer Michiru Yamane also helps set up the mood in each stage you play.

Skullgirls also features an online battle mode...when it works, though. Three-quarters of the time I've tried battling online it either kicks me off or it says there's an error with the server. When it does work I couldn't help but notice the game having lag issues. From time-to-time the action in the game would slow down, making it hard to maneuver and battle it out against your online opponent. 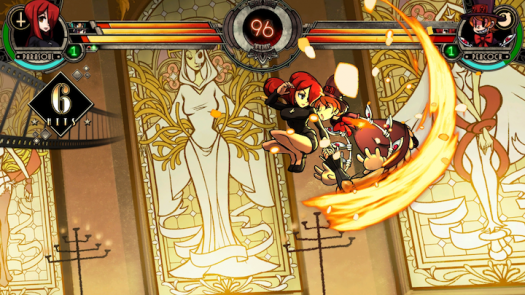 With only eight characters to play as, there is currently a very minuscule replay value to be found once you beat all the story modes (if you can beat them, that is). Sure there is plenty of fighting to be had with friends, but the sheer quality of its sights and sounds still doesn't replace the quantity of combatants you can go hands-on with. Autumn Games has promised more characters via DLC, but if they're not free (as the 1200 Xbox Points/$15.00 price tag is more of a ripoff than anything) many people won't be jumping on the chance to grab them.

I know there's a good game somewhere in Skullgirls, but as the game is now it feels below average thanks to the minimum amount of characters, confusing control scheme, and a certain character's AI system that makes her impossible to defeat. What Reverge Labs and Autumn Games have released here is an incomplete title, and to charge it the way they currently are is a slap to the face of every fan of the fighting genre. Maybe later in the year the game will become better, but for now I'd wait for new life to be breathed into Skullgirls before putting the cash down for it.