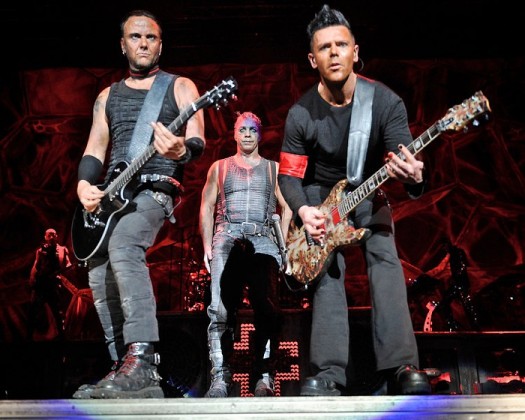 By the end of the Rammstein concert Sunday night at the nearly-packed DCU Center people were set on fire, sprayed with water, showered with confetti, and covered in foam. It was also visual proof that the six-piece metal act from Berlin know exactly how to put on a memorable show.

Rammstein entered the arena via walking through the crowd and over a descending bridge, before breaking into "Sonne" with the crowd counting along with vocalist Till Lindermann in German. The pyro came full force during "Wollt Ihr Das Bett In Flammen Sehen?" where flames and explosions surrounded Lindermann and drummer Christoph Schneider. During "Feuer Frei" the flames grew farther thanks in part to the fire-breathing masks worn by three-fifths of the band, creating a heat that could be felt all around the arena.

Being together for over fifteen years has done nothing to weaken the strong stage presence of Rammstein. Lindermann knew how to pull at the heart strings, especially during "Mutter" and "Ohne Dich," where his growl was replaced with a voice filled with power and sadness. Schneider banged away at his kit with extreme energy, whilst guitarists Paul Landers and Richard Kruspe jammed on opposing sides of the stage. Bassist Ollie Riedel stayed next to the drum kit for the most part, jumping down to join his guitarists here and there. Keyboardist Flake, on the other hand, slammed on the ivories whist walking on a treadmill and occasionally dancing along with the music, making it clear why he might be the most popular member of the band.

Despite the heavy music Rammstein have not forgotten to have fun during their performances. When Lindermann emerged with a giant cooking pot during "Mein Teil" there sat inside of it was Flake, gleefully being burnt alive by the frontman before running around the stage with mini-flames shooting out of his behind. As the first encore began the band crawled over the bridge to a mini-stage set in front of the soundboards like dogs while Schneider -- dressed in drag -- whipped them along to the other side. Lindermann also managed to get the audience wet during "Bück Dich" with a water cannon protruding from his face, then shooting the audience with bubbly foam out of his giant pink cannon in the show closer "Pussy."

When it was all said and done Rammstein gave it their all and more, and Worcester returned the showmanship with massive sing-alongs and the occasional helping hand (especially during "Haifisch," where Flake surfed the crowd on an inflatable boat). As the final note played the band knelt towards the audience, giving thanks to the crowd for feeding them the energy needed to pull off a show like this. "I hope we don't get arrested like last time," shouted a smiling Lindermann, referencing the infamous Worcester incident from 1999. In true form Rammstein gave the audience exactly what they came to see: a night of explosive songs, jaw-dropping spectacles, and a visual experience unlike any other band in the world can deliver. Here's hoping Rammstein returns to our parts sooner than over a decade later.