HomeVideo GamesRainbows & Zombies At PAX?! Must Be "Lollipop Chainsaw"!

Rainbows & Zombies At PAX?! Must Be "Lollipop Chainsaw"!

Rainbows & Zombies At PAX?! Must Be "Lollipop Chainsaw"! 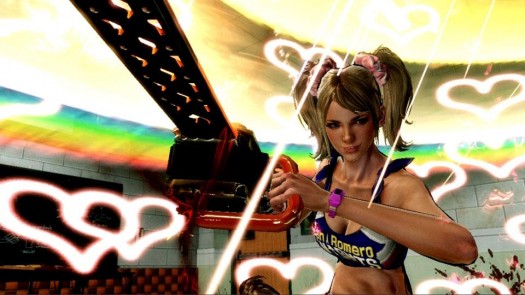 Whenever you have Suda51 involved in any game, pure unadulterated insanity is what is to be expected. Here at PAX East that's exactly what I witnessed when I went hands-on with his latest gem: Lollipop Chainsaw.

In the level I was given to try out our heroine Juliet must defeat the zombified players of her San Romero High's baseball and football team. To kill the zombies you can use two different tactics. The first -- and most obvious -- is your chainsaw, which can be simply slashed at the undead's heads or in a fearless charing motion, railroading your formerly-living teams into a pool of blood and rainbows. The other way to kill the already-expired enemies is to use your cheerleader moves to attack and decapitate your foes. Both have their advantages, but many guys will have more eye candy to appreciate when Juliet busts out her cheers.

Players can also use her boyfriend Nick's severed -- but very much still alive -- head on a zombie's body, but in order to use it properly you must use a sequence Quicktime-styled events that get Nick moving. Here it was quite difficult to get Nick on his feet, as the emphasis on "quicktime" seemed a bit too, well, fast to keep it. Maybe it was because it's still in production, or perhaps it was because I was enticed by my surroundings at the BCEC, but I found this aspect a bit frustrating. 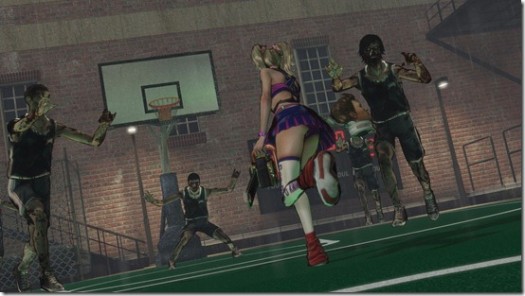 Lollipop Chainsaw was also noticeably glitchy. In one area I was supposed to sprint off of a board onto a school bus, but no matter what button combination I pressed Juliet just didn't want to launch herself. Sometimes I noticed that zombies would appear out of nowhere, and not in a coming-out-of-the-ground kind of way; the undead would appear right in front of me even when nothing was there a split second before. Again, as this game is still in production until its June release date these elements are bound to be fixed by the time it goes gold.

While Lollipop Chainsaw did not exactly blow me out of the water like I hoped it would, I am confident that the final product will do itself justice. After all, when you have Grasshopper Manufacture, WB Games, and Kadokawa Games teaming up for some zombies killing and cheerleader fan-service, it seems almost impossible that it will fail to deliver when it's launched across the world.