HomeVideo Games"Fez" Will Give You Goosebumps 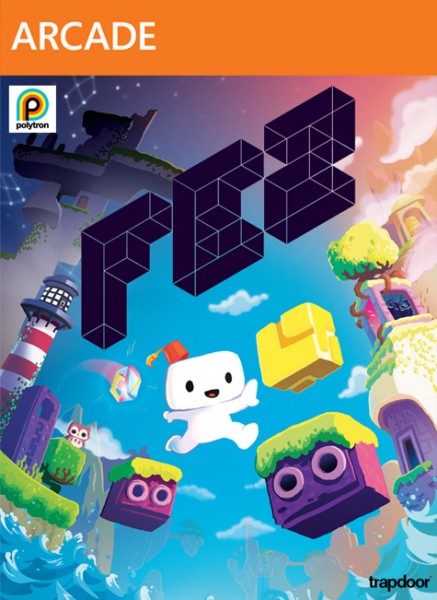 There comes a time when a game not only embraces artistic integrity, it puts it front and center in the gaming experience. Titles such as Flower and Journey have done this well in the past, in which gameplay, storytelling, and visual beauty combine to create a unique experience. Newcomers Polytron Corporation (with some assistance from Trapdoor, the makers of the violently brilliant Warp) have done just that with its Xbox Live Arcade exclusive Fez, a game that not only gives nods to old-school gaming, but also successfully meshes it with new-school style.

Gomez lives in a world where cubes claim to be nonexistent, until one day he is given the adventurous task of saving his beloved world when shards of 32 gold cubes and 32 anti-cubes are scattered across the land. With the power of switching perceptions thanks to his new hat Gomez can now reach bigger heights and solve puzzles. Along with his not-so-helpful friend Dot, Gomez races against time to save his planet from being sucked into a black hole. 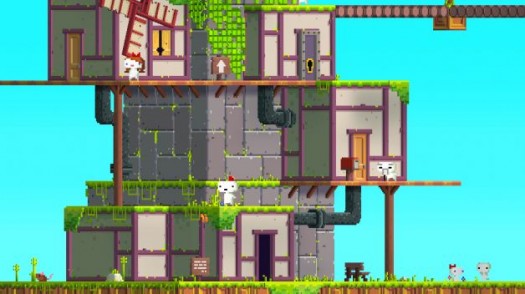 The game is constantly played from a 2D-aspect, with the ability to flip the view of each world 90 degrees at a time. Throughout the game players will have to find doors that lead to different rooms and areas that contain shards of the golden cubes, as well as figure out the solution to various puzzles. You will also collect maps that lead to hints for four hidden artifacts, though these maps can be quite confusing to figure out. There are no power-ups, there are no villains, and there are no penalties for death. This game is about an average character who is given an extraordinary task, something that should hit home to gamers everywhere.

The game's simple control scheme allows gamers of all ages to jump into Fez. Clicking the left trigger or right trigger flips the area, the d-pad or left control stick moves Gomez around, A jumps, B lets you talk or read signs, and X grabs objects used to solve key mysteries throughout the game. At times players will find themselves thinking outside the box to discover hidden cubes and pieces, with some puzzles literally requiring gamers to use something outside their Xbox. In a couple instances I came across some wall imagery that looked conspicuously like QR codes. Turns out by whipping out your smartphone and scanning the image you will find a hidden button code that -- when put in -- will grab you another cube for you to use on your journey. 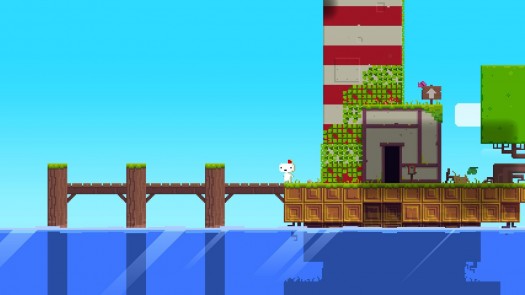 It is very easy to get lost in the world of Fez, though, with its beautiful map causing more confusion than help. At the same time, however, I feel that this game encourages games to lose themselves in it. The worlds you travel within Fez are nothing short of breathtaking, with each pixel pulling you in closer and closer as the game progresses. It may look like something you've played on your NES back in the day, but here the game's ambiance helps to make the visuals seem fresh and something you've never seen before. Each area I discovered made me gaze at its beauty, something that not even a game made using the Unreal engine has ever made me do. My face almost starting hurting from smiling so much during gameplay because I was so enthralled by its world.

A special nod must be given to Disasterpeace's musical score. It is the icing of this game's delicious cake, with each song creating the perfect emotional companion piece to what is happening on the screen. (If I were you, I'd at least take a listen to it on his Bandcamp page, with the option of buying it if you like all things gaming.) 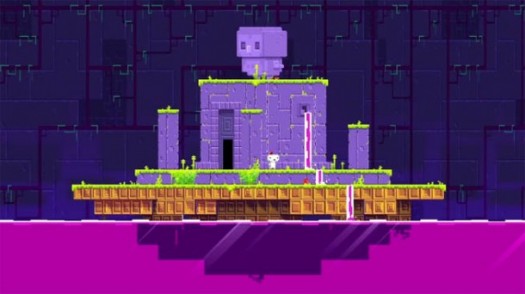 What works, too, about Fez is its tongue-in-cheek humor. For one thing your new friend Dot, who is supposed to be your guide in this game, really doesn't do much except tell you how to control the game. When it comes to the knowings of what's going on, he has just as much of a clue as you. Polytron also made some "glitchy" gags when Gomez first gains the power of the fez, going so far as to "rebooting" the game in classic Windows 3.1 fashion.

Fez will take you roughly six hours to complete during your first playthrough, as you need just 32 cubes of any kind to access the final door. The ending you will bear witness to is very Kubrick, only instead you're given a much happier ending than what he would've done. The option of New Game+ will also appear as soon as you beat it, with all the cubes and artifacts you've collected from your first go-around in your possession; and believe me: you'll have to learn a new made-up language to find the other 32 cubes in the game. (No, seriously, you will.) There's also one tiny little bonus you'll be able to do in New Game+, but I will not spoil it for anyone here.

Fez is a love letter to games and gamers alike. It has so much character and beauty that it's impossible to ignore. What Polytron has done here with 8-bit gaming is the same thing electronica artists have done with chiptune music: made it fresh and exciting for a whole new generation. Fez isn't just an amazing game, it's also a work of digital art. When 2012 draws to a close, it might even be my pick for Game of the Year.

Episode CXXXVII: The B3 Stooges