HomeVideo GamesSerkis Creates A Worthwhile "Odyssey," Despite Its Bugs

Serkis Creates A Worthwhile "Odyssey," Despite Its Bugs

Serkis Creates A Worthwhile "Odyssey," Despite Its Bugs 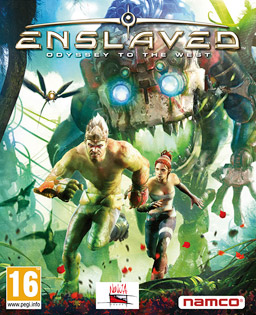 There have been many adaptations of the popular Chinese mythological story Journey To The West, whether they're done via anime (Saiyuki, Dragon Ball), Chinese TV serials and operas written by the dudes who created Gorillaz (Monkey: Journey To The West). In regards to the video game realm there has been very little to few in-between when it comes to bringing the classic tale to the consoles. Last year famed motion capture actor Andy Serkis and 28 Days Later writer Alex Garland teamed up to bring us a more Western approach to the tale, known as Enslaved: Odyssey To The West.

Taking place in a post-apocalyptic America Enslaved follows a man known simply as Monkey (played by Serkis), who escapes from an egg-shaped capsule and flees from a plane that is falling apart. When he wakes up Monkey finds himself in control of a woman named Trip (Lindsey Shaw), who has placed a mind control device on his head. Trip tells Monkey that she needs his help to get home, and if he runs away or lets her die then he shall die as well. Using his climbing abilities, a powerful staff and a flying device known as Cloud Monkey is able to take down mechs, solve puzzles and protect Trip from harm's way. 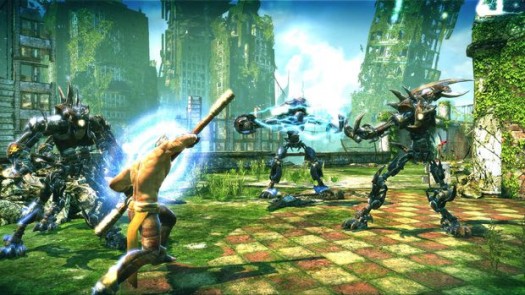 The first thing that surprised me about Enslaved was how close to the original source material it was. Three of the main characters from Journey To The West are in attendance, which also includes Pigsy (Richard Ridings) later on in the game. Monkey's weapons are just about the same as the traditional story, and while the Cloud may is now more of a technological invention than a god-given power it still rings true to the original concept. The original story didn't have robots like in the game, but they fit as a well-done substitute for the various demons that the true source had. For a futuristic adaptation Odyssey To The West keeps to the true spirit of the epic Chinese tale.

Playing Enslaved Monkey will have many abilities on-hand, as well as the option to upgrade your powers via collecting tech orbs found either lying around or popping out of defeated enemies. Trip also has her own abilities that help to make gameplay a tad more simpler in the long run, including the ability to use a hologram to distract enemies. Controlling the game is a breeze, as well, considering all the different powers you have. Meleeing against enemies with your staff is very simplistic, and while there is a lot of button-mashing involved it doesn't get to the point where your fingers start throbbing in agony. Switching between the more powerful weapons within your staff is also easy, with a mere flick left and right to choose the ones you want. Using the Cloud might take a bit getting used to, but once you figure out the ins and outs of using it within the specific levels you discover that it's tons of fun to fly around if you find the right areas. 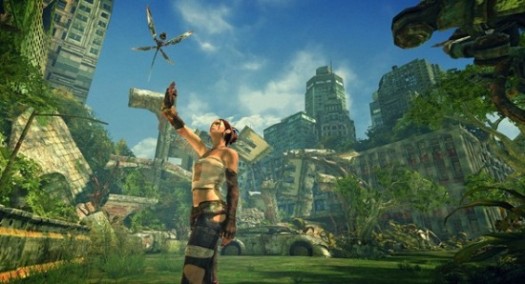 Graphically the overall look of Enslaved is stunning, and it is amazing how much detail was put into the appearance of the characters. Using motion-capture techniques the movements and looks of the characters were pinpointed to the nth degree, and thanks to the usage of the Unreal Engine the game's visuals are gorgeous. Seeing a forest growing within the ruins of New York City was quite a sight to behold, and the other worlds glimmered with a sort of realistic vibe to it. Unfortunately there are bugs in the game, especially when it comes to loading certain areas. In Part Four of the game I was told to battle out some robots before making it onto the theater stage, and when I went down there were no enemies to be found. There was also a moment in the last boss battle where I was taking care of some side enemies, and I wound up losing my staff abilities for no apparent reason. When I went to go back to the last checkpoint instead of jumping to the last part of the game I was on it instead went back twenty minutes to the section before the last boss, forcing me to redo everything at that point.

One other gripe about Odyssey To The West is its length time. I wound up beating the game in roughly seven hours, and for a title that was $60 at its release time it seemed like a bit too much. (As of right now it's roughly $15-20 on Amazon and Gamestop, which is not a bad deal.) Fortunately the story and gameplay aspects make up for its short-comings, not to mention that it has a quite an interesting ending that deals with what's right to do in a trashed-up world looking for a place to escape all the hopelessness. It also helps that the dialogue in the game can be quite funny at times. I don't want to spoil anything, but let's just say there's a hilariously awkward moment between Pigsy and Monkey. 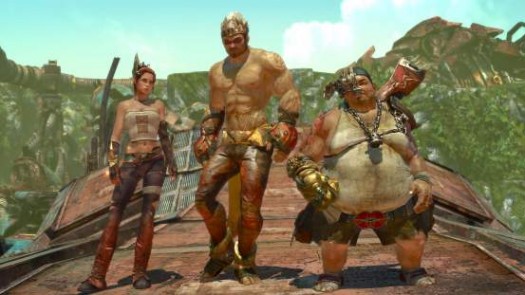 Enslaved is one of those titles that could've been a masterpiece, but due to its bugs and game length it can only be considered pretty good. Still for what it's worth Enslaved is a gaming experience that you don't see often in this world, and that's something I hope is changed in the near-future. As it's been out for almost a year the game's current low price helps make Enslaved worth checking out. Cross your fingers that Garland and Serkis will work together again to bring forth another great title, only with fewer glitches.