HomeVideo GamesOMG NOT ANOTHER MINECRAFT REVIEW!!!

OMG NOT ANOTHER MINECRAFT REVIEW!!!

OMG NOT ANOTHER MINECRAFT REVIEW!!! 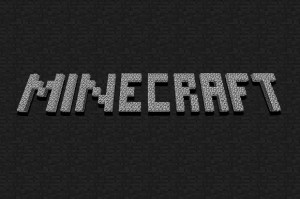 This is one I have been putting off for a patch, or a base build that is worthy. If you know Minecraft then you either love it or decided it's not for you.  If you do not know about this game yet, you might have just found the best title in ages.  So what is Minecraft anyway? Well to be honest it's hard to explain...

I will try to compare Minecraft to other things, but it really unlike any game out there. Granted it is similar to a bunch but its quirks set it off from its original inspirations. Before I get into the main part of this review I will say the graphics are hard on the eyes detail-wise, but luckily there are plenty of texture packs out there that make this game look beautiful. I just could not bring myself to review this with the basic textures, and I would not do the game justice if I did not show its original textures also during this. If you are looking for a good pack, then search for TPelham42’s texture pack. (It is the one I am currently using, and it has a less grittier look than the photorealistic pack.) 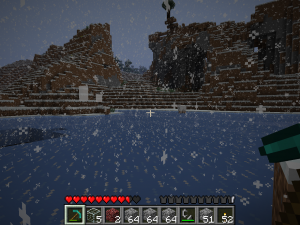 Let's first jump into the basics: What is Minecraft, and should I buy it? Most people would give this five stars or 1-2, depending on the games the person likes to play.  Well should you continue reading or get this game?  If you like playing with Legos or building titles, then you might be in love.  Minecraft is at its basics a building game, and that is the core concept for it.  The alpha version of the game is free and allows you to place textured blocks to make your own structures and design things.  Now what is this Minecraft game really? Here comes the long list of features and explanations of its gameplay/semi-tutorial.  The version you buy (15 euros, you can do the conversion) is the survival game.  Its core is still the same, but with creatures and added features.  At the base you are racing the clock to build/find shelter before night comes.  When the sun goes down you will make the discovery of zombies, archer skeletons, spiders, and the dreaded creeper. (Odds are you have seen this guy somewhere around the Internet.) 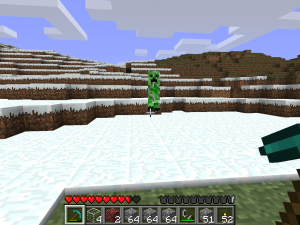 In fact anywhere it is dark is a place where you can find nasty creatures who want to kill you.  You start looking around the world to smack blocks to pick them up, building a shelter in the nice procedurally generated world. Every world is MASSIVE and unique. Seriously, you can explore for hours before the game glitches out because you overran the computer’s memory.  You'll soon notice that you have trouble breaking stone, and wood takes a while.  However there is a crafting system to make picks and axes along with TONS of other things. (If you think I am joking then here you go.) 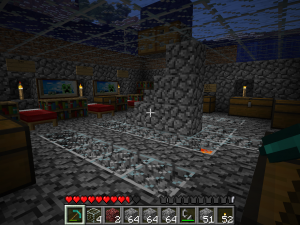 For those who like to explore, you have probably chosen to dig to the bottom of the level -- or went running -- and found a cave.  Yes in these created worlds there are giant caves out there to explore and mine for all types of building material. 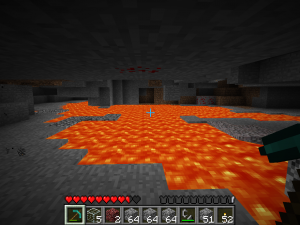 So build some touches, start digging and try and find a cave or possible dungeon. (You will notice these have green stone and a monster spawner in the middle of them.)  Just when you think you have done it all, you can then build a massive mine system with a castle and tram system using redstone, logic gates and switches. Trust me: this game gets REALLY complex when you get into powering things with redstone. You will then discover you can go to another dimension with new creatures and blocks.  This new area has many uses and looks amazing, and is basically a cavern filled with lava, pigmen, and ghasts (ghosts basically). 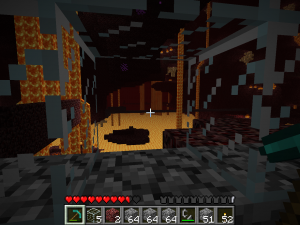 So maybe you want to buy it and play this game with friends.  Who wouldn't want to build in a huge world with all their buddies? Fortunately there is an online multiplayer survival mode that comes with your purchase.  Find a friend to build some massive structures and start up a server if you have a good computer.  The software is easy enough to work, and the basics are make a folder and run the program. (Make sure you have port 25565 on your rougher open if needed.)  Just have your friends connect to your IP address and start playing.  But what if you don't have a computer and are interested in playing Minecraft? You can rest easily, as it was announced recently that an Xbox 360 version is being made so the console gamer can get into the building frenzy. 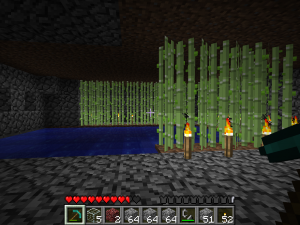 I have had issues playing a beta in the past, and I do not like bugs in my games.  However I can say that Minecraft is patched and fixed quickly thanks to the effort of the creator Notch and his studio Mojang.  It takes a day or two usually after major patches for the game to get stabilized, but it is worth it.  To keep up I would look on Notch’s blog or the company website frequently.  This game is patched A LOT and items are being added in as you play.  Notch made a statement about playing with a sky dimension, and has been pushed to confirm it as a final feature by release (November 11 estimated, but post release updates promised). 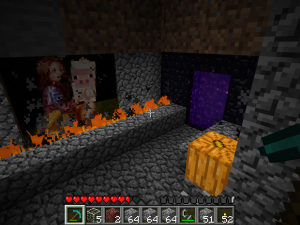 I am sure I have missed something in this review of what Minecraft is, but it is such an open game that I doubt I have even explored everything with over six months of playtime behind me.  So I am now forced to actually review this game and give it a rating, and find some faults with it. As of the new patch and updates to it, all the bugs my friends and I have encountered have been fixed for the most part. The textures that come with the game can be lacking, but with the community behind this game that can be solved just by searching for a texture pack in under ten minutes. The only real downside would be facing creatures after you have armor, as it is not that difficult to kill things when you are fully equipped. 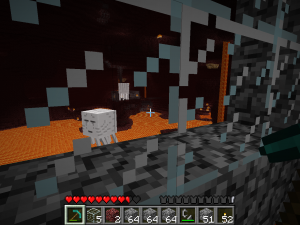 Really if I were to request something from Notch it would be a tougher creature to fight that drops a valuable reward.  I would be disappointed in myself if I found a real reason to not give this game five out of five because my friends and I fell in love with this game from day one. So I shall just give up and say yes, it gets five and deserves every good review out there.  Now why are you still reading there?! There are diamonds to mine and doom forts to be built!!! 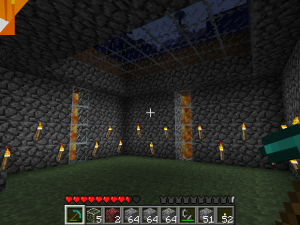 (Special thanks to my building friends Dan, Mike, Daevanna, and Steve.)

PS: Here is using the texture pack and what we have been working on for a few days in our spare time: 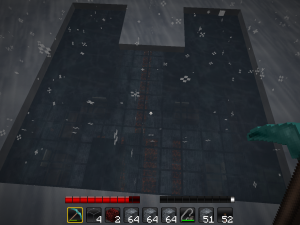 Underwater Base (I personally build in strange places.) 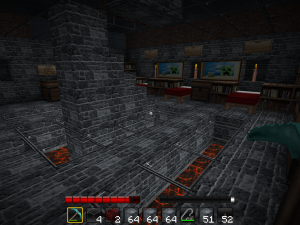 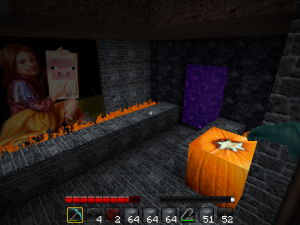 Portal Room (Dan likes to add nice touches to everything. The pumpkin was my idea.) 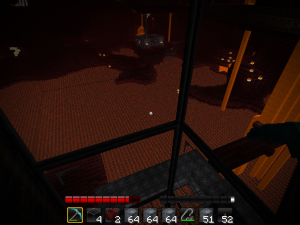 A view of our nether base (Dan made it look nice, but I went WAY too far with this one!) 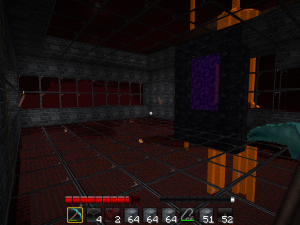 My personal project: a base on a floating island over lava. 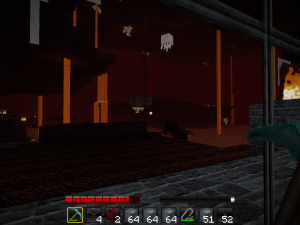 This final pic is the view of my second base. To get out there I had to build a bridge over the lava to the left while getting pummeled by ghasts, until I could find an area to cross to the island. To link it to my main base I built a shaft leading up to the nether roof, and a tunnel floating over everything over the base. I then had to go back to the island and build another shaft up. It took ages and I was called crazy many times, but it looks amazing in the end with all the work. Plus I can brag I did it all with no cheats!

One more thing: Because I was slow with posting this, the next Minecraft update will be the adventure one.  Everything from towns to ruins will be put in, as well as lots more randomly generated content to explore.  Notch has also said a floating island dimension will be coming sometime soon, as he is currently working on the code for it.