HomeVideo GamesAtlus Wants You To "Rock", Roll and Squash!

Fear not gamers, for this is not a video game based on the hair metal Broadway musical. Instead Atlus and ACE Team's Rock of Ages is a game whose concept can be explained in its title alone. At E3 I had the chance to go hands-on with the title, leaving me with my funny bone tickled and a much heavier anticipation for the game's release.

As the Greek character Sisyphus players will have to literally roll through the various time periods, bringing wanton destruction with your giant boulders and taking down every person you come face-to-face with. The opponent will be doing the exact same thing, so it'll be up to you to defend your area from being destroyed. You'll find yourself creating ruins in Ancient Greece, flattening out the Dark Ages in Medieval times and smooshing the hearts (and bodies) of the townspeople in the Romanticism era. Gamers will also be given the chance to go head-to-head in various multiplayer modes, including rock-to-rock combat, SkeeBoulder, Time Trial and many more to be announced soon. At the Atlus booth I was able to try out two of their tutorial modes, one main level and go head-to-head with one of the guys from Atlus in a multiplayer mode. 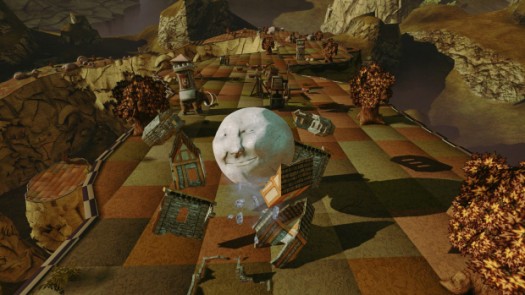 For the tutorial modes I was given the opportunity to figure out the ins and outs of Rock of Ages. Aram Jabbari, Atlus's PR & Sales Manager, gave me a quick demonstration of how the game works before handing it off to me. You move the boulder around the town, destroying everything you can to build up points. You also must learn to swerve around objects during crucial moments, as at the end of the level is a door that needs to be smashed open to win. The level is completed when you squish the king behind the door.

Maneuvering the boulder in Rock of Ages is somewhat reminiscent of playing the game of labyrinth, in which you'll find yourself trying to teeter on the thinest strips of land, trying hard not to fall off. Fortunately if you do fall off you'll be picked up by the hand of God and dropped back into the game, though you might be penalized if this does happen. In regards to defense mode players will be able to build towers and place catapults in the way of the opponent's rock, which will either slow it down or send it flying off-course. Gamers will also be able to insert balloons and other weird flying machines that will block the opponents from enter hidden paths, and command animals to keep the boulder from reaching its goal. 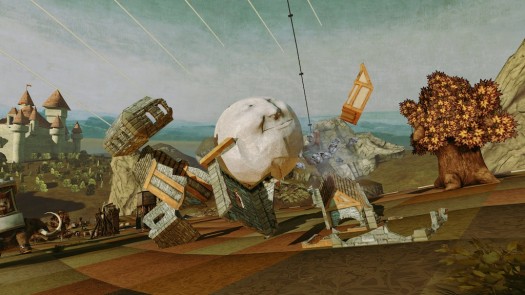 While playing Rock of Ages one key word kept ringing in my head: Pythonesque. The game pays heavy homage to the British comedy legends, especially to Terry Gilliam's animation style. Characters and worlds seem to be pulled right out of those kooky, nonsensical cartoons that take classical art pieces and use them in such a way that their original creators were spinning in their graves. Even the soundtrack adds nod to Monty Python, with silly screams from the people and crunchy crashes from the buildings you destroy; and yes, the king at the end of the level gets flattened with a farty splat.

While I played the single-player mode at the Atlus booth I had to play the multiplayer section in the Microsoft section at E3. There I met with Atlus's Assistant Editor Clayton Chan, who showed me the ropes of two of the multiplayer modes. First we both went head-to-head in a regular multiplayer battle. I made the quick mistake of spending too much on useless defense items instead of saving them for more powerful boulders, with the end result being Chan handing my ass to me on a silver platter in what was a very close battle. I quickly got my revenge, however, in SkeeBoulder, in which the more items I smashed the higher my points would accumulate when I reached the end of each level.

After hearing so much about it beforehand I was very happy with the results I've seen thus far in Rock of Ages. With a release date of August 31 on PSN, Xbox Live Arcade and PC gamers will not have to wait long to play a game that will not have them rolling through the times, but also all along the floor laughing their heads off.