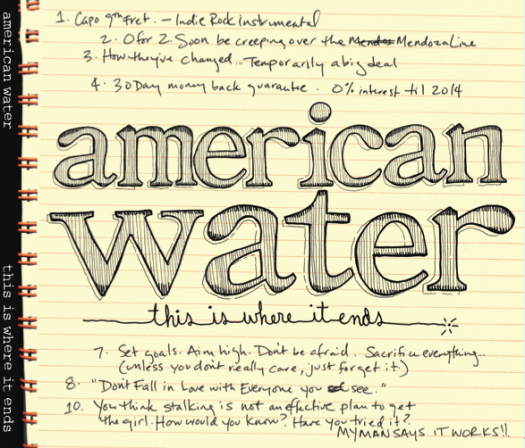 Let me get one minor complaint out of the way: American Water is not quite an eye-catching band name, rather it sounds like something you'd by for three dollars a bottle at the Smithsonian Museum. However this Boston-based trio has managed to take an uninspired name, and create itself a sound that rings of true originality, even while wearing its influences on their sleeves. Their debut album This Is Where It Ends showcases how a band should properly make their entrance.

Clocking in at under 30 minutes This Is Where It Ends finds itself filled with many radio-worthy tracks that can easily get stuck in your head for days. One of said tracks is "Better Than Too Good To Be True" (currently being spun on WFNX), which comes off as something like a Robert Smith-fronted R.E.M. Vocalist/guitarist John Kinnecome takes the concept of love and transforms it into something that can be bought and returned with a receipt, with the line "the offer expires by the end of the song" playing on how quickly the opportunity to meet someone comes and goes. "Old Best Friend," on the other hand, contains the spirit of Seattle grunge rock with a slight English tone. It almost sounds like something you'd hear in an early Kevin Smith film, or an episode of The Adventures of Pete & Pete.

Out of all the tracks on This Is Where It Ends, none is stronger than "This Place Is Going Down." In many ways it's reminiscent of Japanese rockers Bloodthirsty Butchers, thanks in part to Kinnecome's spirited vocals and Mike Higgins's bass arrangement. While Dennis McCarthy isn't as tenacious a drummer as Masahiro Komatsu his enthusiasm throughout the song bashes throughout the track, giving the song the proper backing it needs to be properly noticed. The band even knows how to take it down a notch with the acoustic "Sink or Swim," a lovely track whose minimal style pushes out some of the more powerful aspects of American Water.

American Water also fits in three instrumental pieces on their debut recording. The first, "Formerly Untitled," opens up the album with a twangy guitar and a simple piano part that bookends a good drum beat and bass section. It serves as a pushing point for the listeners to enter into their realm. "Off Course," on the other hand, tends to drag on a bit, even with its quick running time. "Buddy," the final instrumental song, is a short-but-sweet ditty that helps to segue to the final song on the album, the humorously-titled "Best Stalker In Town."

American Water may have a minor fault or two on their debut album, but overall this up-and-coming band from the Hub have got quite the compelling opener with This Is How It Ends. While the band name may not be catchy, the melodies are, and American Water has the upper hand when it comes to taking over the Boston music scene because of it. All I ask is for them to prove me wrong in regards to their name, and make it one that'll be front-and-center to anyone who comes across it.