Kong Returns To His Mighty Throne

Kong Returns To His Mighty Throne 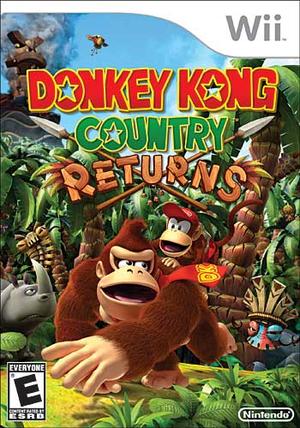 Donkey Kong Country remains as one of the best video games ever released by Nintendo. From its addictive gameplay to its (at the time) stellar 3D graphics the adventures of Donkey & Diddy made it impossible to not go back and play it all over again. Near the end of last year Nintendo partnered up with Retro Studios, the same folks that brought us the immortal Metroid Prime series, and together created Donkey Kong Country Returns. Needless to say this was a homecoming celebrated all throughout the world.

The premise is just as simple (and silly) as ever: evil Tiki gods have hypnotized the good-natured animals of the jungle, commanding them to do their evil deeds. Their plan: to steal Donkey Kong's banana hoard and use them to...I'm not exactly sure what kind of evil you can do with a banana, at least in an E-rated game. Forced to get it on like his namesake Donkey Kong and his jet pack-shoning buddy Diddy set out on another glorious adventure to save their tasty treats, along with their jungle friends.

Like the original Donkey Kong Country, this sequel has the map setup to separate each of the seventy-two levels and nine worlds. These levels range from the regular side-scroller to the somewhat stereotypical time trials, and while these levels keep to the nostalgic aspect of the game it would've been nice to see a couple more modes in the final product. However this doesn't take away anything from this and the past DKC games, so gamers shouldn't worry about this game being a one-trick pony. The Crazy Kart levels are there, as well as the Rambi the Rhino ones, so there is nothing that was in DKC that isn't in Returns. 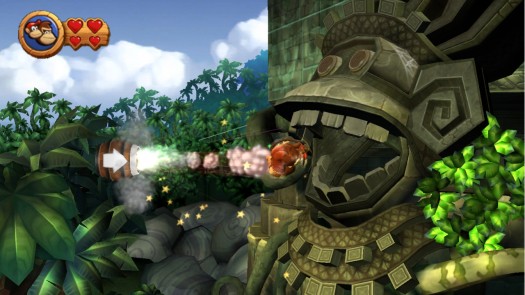 Boss battles at the end of each world will have you facing monsters of various strengths and somewhat diverse weaknesses. For example the first boss level will have you taking on Mugly the horned toad, and in order to defeat him you must jump on his back when his horns aren't protruding through its body. Another boss battle will have you facing off a jeweled-like worm, where you'll need to shine a light through the walls to weaken it to lay on some damage. Sometimes these weaknesses are easy to figure out, but in regards to, say, the pirate crab bosses, you'll have to do a trial-and-error sort of test in regards to defeating them.

Graphically Donkey Kong Country Returns has been done properly, with it overall looking close to the original game revamped for the current-gen systems. Not only does it look spectacular for a Wii title, it looks almost as amazing as a PS3 or Xbox 360 game. The folks at Retro Studios even experimented with some of the levels' outer appearance, which leads to some very cool levels. I loved the look of the silhouette levels (especially Sunset Shore in the Jungle World), where everything is seen in a shadow-like appearance, with the exception of DK's red tie. It's a game like this that makes me wonder how Nintendo plans to graphically up the ante the next time around for the next-gen system. 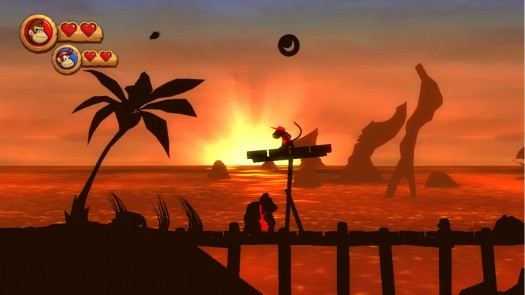 In regards to controls there are two ways to play it. You can tackle Donkey Kong with just the classic Wiimote if you'd like, but you'll find a lot more fun playing it with the Nunchuk peripheral. With the latter setup you will literally pumps your fists to make DK ground pound, along with blowing fans to find hidden objects and doing a barrel roll. When you have Diddy Kong with you he can help jump large gaps with the help of his trusty jet pack. The one thing I do miss, however, is the ability to control Diddy in single-player mode. You can control him when playing with a friend in two-player mode, but it's missing when going at the levels alone. Shame, as I wanted to take on the levels with Diddy's peanut gun. (Those wanting to control Dixie and Funky will also be out of luck, as they aren't even in the game.)

If a level is too hard for you to complete, there are a couple options you can take. The first -- and most recommended -- is buying up Cranky's shop. There he sells items such as extra lives and hearts, along with temporary invincibility and a parrot that will help seek out hidden puzzle pieces. He also hold the literal key to unlocking a level or two in each world. If you still can't figure out how to beat a level after at least eight tries you can use the power of Super Kong to help you go through the rest of its duration. The only downside is that you will not be able to keep any of the collectibles you obtained during said level. 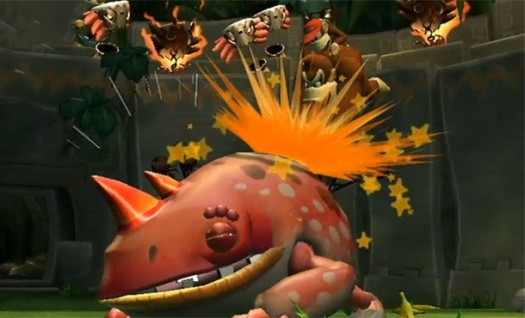 You can expect at least ten hours of solid gameplay when playing Donkey Kong Country Returns the first time over, but it might take an extra five to gather up every puzzle piece and K-O-N-G letter. Each level may also take up to ten minutes to complete, depending on how fast you can conquer it. While there are checkpoints in each level it might've been better if they had more scattered throughout. There were many times where I was about five minutes into a level, died and then had to start all over again. (I think I lost count in the Tidal Terror level in World 2.) Still these are but microscopic hiccups within a near-flawless platformer.

Donkey Kong Country Returns is a fine reminder of why I loved the series in the first place. From its classic characters to its solid sense of humor there is a whole lot to enjoy in this exciting chapter. Retro Studios had big shoes to fill considering Rareware's somewhat bitter divorce with Nintendo, and they seemed to manage to capture the true spirit of the original canon. In short: it's safe to go ape over the DK's well-needed return to form.

Episode LXXXVI: Bring Back The MVP...