HomeMovies"Repo Men" Is A Tough Job, But Someone's Gotta Do It! 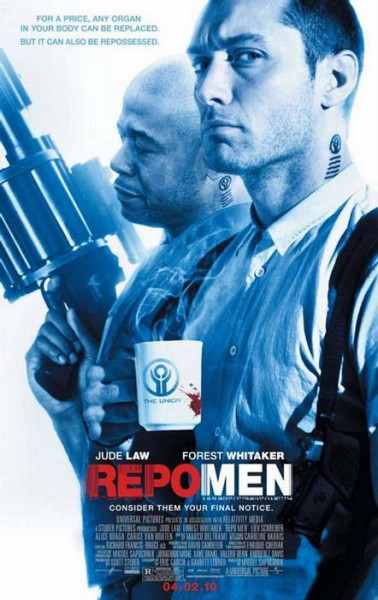 The concept of this movie is beautiful, but the ending was a little iffy for me. I do like the actors they lined up in this film, though, such as Jude Law, Forest Whitaker, Alice Braga and Lieve Schreiber. Jude Law is the main character in this setup, with his sophisticated brilliance used very well. In the beginning of Repo Men Law is trying to provide people with the ethics of a future that's pretty screwed up.

Jude Law's character Remy works for the company called The Union, where it's capitalism at its best.  It's a company that is built on the fact that people who have suffered either serious accidents or other medical issues can go and obtain the assistance to keep themselves alive. However they are like the bank, and if the person gets an organ and they miss the payments after a certain time "The Union" can go and take it back. This is where Remy comes into play, who used to be in the military at one point and was able to land the job as a repo man. The job entails him to use a special scanner that tells him if people have any overdue products in their bodies. His wife Carol, though, has issues with him being a repo man, and wants him to go to sales.

Of course Remy is trying to please Carol, and tells his partner Jake, played by Forest Whitaker. Jake doesn't take this too well, as he used to bully Remy back in school. They were also in the military together, and now they are paired up as repo men. While at a cookout Jake gets a call from one of his informant taxi drivers that he's got one guy that has a six month overdue organ. Remy doesn't want him to do it, but the money offer is too good to be true. He takes the job, but while he's doing the dirty deed Carol watches him take out the organ. Carol leaves Remy, and he tries to go to work as a marketer; but before he does that he goes for one more job. He goes to take out the heart of a famous musican that has lost it all, played by the RZA.

When Remy goes on this last job he has to use the defibrillator in order to stop the person's heart so he can take it out. For some reason the defibrillator backfires, launching him across the room. (It's pretty funny to discover how he's been knocked out.)

Things turn to shit for Remy, who discovers that the defected defibrillator destroyed his heart. The boss tells him to buy the mechanical heart, or he'll die. Naturally he takes the deal, and as soon as he is healthy he goes back to work selling the products. Unfortunately his new life doesn't work very well, as he suffers depression due in part to his wife leaving him and his mechanical heart. Remy tries to go back to do repo work, yet he fails epically.

Now Remy can't even pay for his own heart, so he starts to worry if his fellow repo men are going to come and get his organ back. With him trying to get back into the swing of things to be the repo man that he used to be Remy tries to go on another hunt, but gets knocked out again. He wakes up and hears singing. Come to find out it's Beth, the woman that he heard singing at the bar a month or two beforehand (played by Alice Braga). Beth is a drug addict, and has had a bunch of surgeries that she went through in order to be the person she now is.

Remy and Beth become lovers in the long run, as he tries to help her out by getting their organs and equipment put in the computer so they can run away, avoiding any kind of death from the hands of The Union. So they go through the fun run in the movie. In a certain scene, though, it seems that Remy ends up getting knocked out. He wakes up, takes on the whole company and gets to the happy ending...or does it?

Soon you wake up to what really happened. Remy got messed up by Jake, and The Union put him on this neurological net thing where he's in a vegetative state.

Repo Men was really well put together, but it just feels like it could've been so much more. Perhaps they should've done a different ending where he actually takes The Union down, or at the very least takes it over and runs it the way it's suppose to be. I guess you can't get the movie the way you want it.