Samus discovers a distress signal dubbed "baby's cry," and sets out for the abandoned ship where the call is coming from. On the ship she runs into a group of old friends: the Galactic Federation 07th Platoon, led by her old commanding officer Adam Malkovich. In order to stop this new breed of evil the Galactic Federation teams up with Samus in order to stop a new batch of Metroids from spreading across the galaxy. 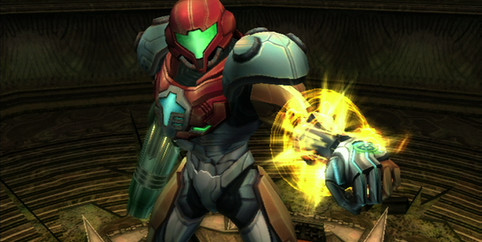 In regards to the control scheme I was very surprised by how fluid the motions were in Metroid: Other M. Playing normally with holding the Wiimote like a classic controller gave way to easy button-pushing and usage of of your arsenal. Firing your weapons on enemy creatures is also simple, as your cannon will automatically lock on towards your nemesis. In regards to using your Wiimote for the first-person shooting aspect of the game I had some issue with the lag and response system. When you try to fire at an enemy using this method I found myself getting badly injured while charging up my missiles. Perhaps if the WiiMotion Plus had been enabled for usage in this game there wouldn't have been any sort of lag to deal with, but sadly that's not the case here.

On top of that the movement of Samus throughout the worlds was a lot better than I thought it would be. When I first saw previews for Metroid: Other M I thought it was going to be a mere side-scroller with the ability to go into FPS, so imagine my surprise to see Samus being able to maneuver throughout the Bottle Ship with relative ease. (Granted, while I do like my side-scroller games, I felt that bringing Samus back to that gameplay on this current-gen system would've been a step back from what Retro did with Prime.) 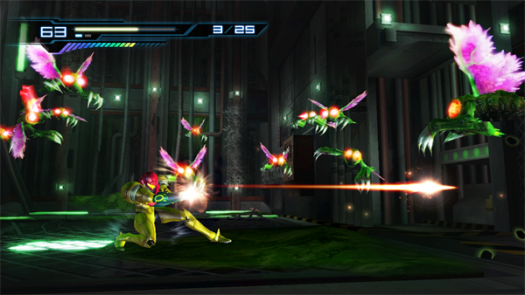 I am currently on the fence in regards to the graphics in Other M. Some moments in the game look gorgeous, especially in the more mechanical-based areas of the Bottle Ship. The FMVs featured in the game are also a sight to behold, coming off like a finely-detailed movie. (Watch some of the flashback scenes, and try telling me that's not some of the best-looking CGI found in any game.) In regards to the more natural environmental areas, they all seem kind of bland and foggy compared to the other parts of the ship. In my opinion the folks at Team Ninja could've spruced up the graphical capabilities in those areas no sweat, even on a system like the Wii.

The voice acting is also a bit hit-and-miss. Hearing Jessica Martin take over the role of Samus (instead of Jennifer Hale, who did her voice in the Prime series) added a bit more femininity to the role, but I cannot help but feel annoyed by the tone of her voice, especially when she talks about the baby Metroid. In regards to the other actors they seemed to do a stellar job, especially Mike McGillicuty's role of Anthony Higgs and Dave Elvin's portrayal of Malkovich. 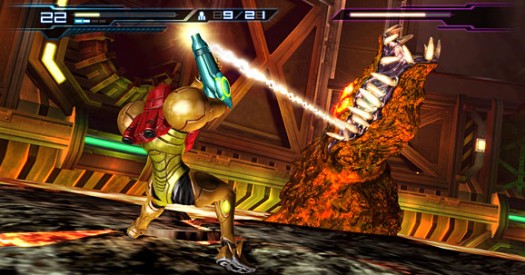 The story itself is what shines the most in Other M. Players finally get the whole background story on how Samus was trained in the Galactic Federation, and how it interlinks between the rest of the Metroid saga. Some critics have complained, however, that these flashbacks to Samus's life have transformed our stone-cold heroine into a softie of sorts; but the folks of Team Ninja succeeded in bringing in some humanity to Samus, proving that underneath that red and orange spacesuit is a regular human with special skills.

Lastly there is the gameplay, and while most of Metroid: Other M is fun, some of the boss battles can be quite the pain. You could be battling those space worms or wasps for quite awhile, and once you gather together a routine you wind up dying. (I swear I spent nearly an hour trying to figure out how to properly defeat some of them!) However if you can push away those frustrating parts of the game you'll find one of the best non-Prime Metroid games out there to date. 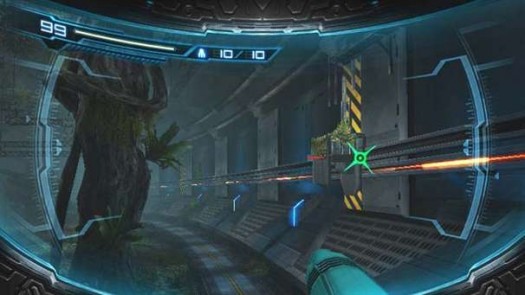 I was pleasantly surprised by the solid gameplay in Metroid: Other M. Although there are some flaws within this title the folks at Team Ninja did a stellar job with creating a new and invigorating chapter to the life of Samus Aran. Just be sure you stick around after the game's end credits.