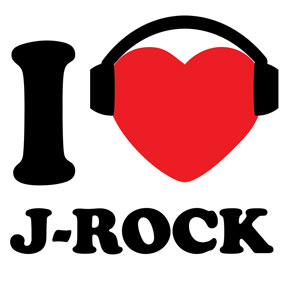 From time-to-time I still have trouble convincing people that Japanese rock is the future of the music industry, so I get a big sigh of relief when I see that more and more American labels are signing these talented artists from the Land of the Rising Sun. This past Tuesday the folks over at Good Charamel Records (founded by by Robby Takac of The Goo Goo Dolls) released the I Love J-ROCK compilation album, featuring ten songs from five of Japan's top girl-fronted bands. Not all the songs on here are winners, though.

This compilation showcases why I feel women make better rock stars than men, and not just because they look sexy sporting a Stratocaster. These cuts from Shonen Knife, TsuShiMaMiRe, Molice, LAZYgunsBRISKY and DJ Sashimi are a massive powerhouse of J-ROCK and Oriental electronica, and it starts off on the right foot with TsuShiMaMiRe's "J-POP," a crazed two and-a-half minute track that spotlights this punk trio's insane rock tactics and sarcastic take on the regular J-POP world. While I feel that "Sakuran Boy" might have been a far better choice for an opener "J-POP" still gets the job done with reeling in new listeners. "Strobe," however, is TsuShiMaMiRe at their best. Mari's innocent vocals -- accompanied by Mizue's heavy drumming and Yayoi's grooving bass line -- is what made me fall for this band in the first place, and hearing a song like this continues to prove that this band is one-of-a-kind in a world of imitators.

Shonen Knife's "Perfect Freedom" gives listeners the reason why Kurt Cobain loved this band so much, thanks in part to their Beatles-like lyrics and pop-punk presentation. Naoko's vocals are as strong as they were when she first started the band almost 30 years ago, and it's songs like this that prove that there's still no one on this planet that matches with their style. "Ramones Forever" pays tribute to the band that inspired them greatly, with its "I Wanna Be Sedated" melody and autobiographical lyrics about the band that changed Naoko's life forever. The live rendition of "Explosion!" is a nice touch, giving listeners a chance to hear that Shonen Knife carries their energy well from the album to the stage.

Having Molice on I Love J-ROCK is a fine fit, but I feel that "Monster" is one of their more weaker tracks from their Catalystrock album. It's not a bad song, per se, but a better cut like "Android said" or "Let's Merge!" should have been used here to gain more interest for Molice. "Romancer," on the other hand, is one of the quartet's best tracks from their sophomore release, sounding like GO!GO!7188 recording a Lupin the 3rd theme. It's sexy in the 70s Blaxploitation sense, and has enough cool that would make a character like Black Dynamite nod with approval.

LAZYgunsBRISKY is new to me, but the two tracks featured on this album have made me a quick fan of theirs. "Navy Star" has a Cherrie Currie attitude backed with a Gitogito Hustler motif; you can feel this band sneering at you through the speakers. "Bitter Day" rocks hard, building up to a bass line from Azu that taps perfectly into your spinal chord. The compilation's closer, "Japanese Girl In New York" by DJ Sashimi, sadly, is a bit too weird to end a compilation with. While the sound of a shamisen behind techno beats is a unique idea, the lyrics lack the rhythm that makes a good dance song. "Japanese Girl In New York" is far too weak of a song to close out this album, a job that would've suit any of the other bands on here better.

While Good Charamel Records has a good line-up here on I Love J-ROCK a couple missteps appear to ward off any sort of perfection. With enough strong promotion, however, I reckon that almost everyone on this album will do just fine in America, even though a couple of them have been getting around this country on their own. Still it's just another big push for mainstream success, the type of spotlight these ladies (and the three guys in Molice) from Japan have been clamoring for.

Episode LXII: You Just Fucked With...