HomeMoviesUniversal's #1 Movie Anything But "Despicable"

Universal's #1 Movie Anything But "Despicable"

Universal's #1 Movie Anything But "Despicable" 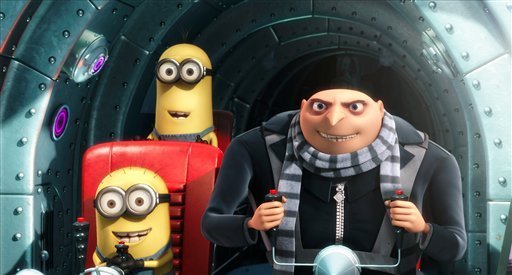 Look out, Pixar! You've finally gotten yourself a worthy competitor in the form Despicable Me.

The first film from Illumination Entertainment (founded by Chris Meledanari, the former President of 20th Century Fox Animation) the film opens to reveal the Great Pyramid of Gaza being stolen by an unknown assailant. The news travels to Gru (Steve Carell), who reveals to his yellow minions a plan that will top the stolen pyramid: shrinking the moon and holding it for ransom. The plan is deemed workable, until he reveals to the Bank of Evil's President (Will Arnett) that he lacks the shrink ray to start plan one. Gru flies to North Korea and steals a shrink ray, only to have it re-stolen by his new rival Vector (Jason Siegel). Unable to infiltrate Vector's headquarters Gru plots a scheme involving three adorable orphans.

The orphans -- Margo, Edith and Agnes -- are adopted by Gru, and are used to help steal the shrink ray back from Vector. What he didn't count on, though, was the bonding he would experience with the three girls, and finds that he cannot part with them; even if his assistant Dr. Nefario (Russell Brand) says that they'll distract him from his plan. Will Gru be able to steal the moon without fail while keeping watch on his newly-adopted daughters?

Despicable Me manages to capture the sort of charm and originality that only the likes of Pixar (and, at times, Tim Burton) have been able to create. The character of Gru is a strange one to focus an entire movie on, but as the film progresses you come to realize that this supervillain of sorts is the perfect candidate to captivate an audience. His hunchbacked frame and truly jerkish mindset -- though more in the vein of an asshole than a villain -- is in itself worthy of the center stage; but it's when his frozen heart slowly melts for the three young girls that we truly see a real down-to-earth character be brought into focus. Steve Carell does an amazing job with giving a voice to Gru, and with his strange Russian/German/Kazakh accent he's barely recognizable in this role.

The supporting cast is also noteworthy, with Russell Brand also unrecognizable as Gru's assistant. (He sounds like a mixture of Jack Sparrow and Murdoc from Gorillaz.) Jason Siegel as the rival Vector also shines, and brings forth the balance of wacky villainy needed to differentiate the styles of madcap badness between him and Gru. The three orphans (played by Miranda Cosgrove, Dana Gaier and Elsie Fisher) bring much of the heart needed to push the warmth and innocence Despicable Me does a fabulous job showcasing. (Elsie Fisher's Agnes steals the show from Carell, and will be one of the most-talked about voice-acting roles for the rest of the year.) Finally we can't forget about those pill-shaped minions (played by the co-directors Pierre Coffin and Chris Renaud), who we can expect to helm their own movie in the near-future. (Might I suggest a Minions Vs. Rabbids movie?) When the minions are on the screen viewers will be on the floor laughing their asses off. Trust me when I say that the supermarket scene is one of this year's best comedic moments.

Despicable Me as a whole works, and from start to finish viewers can expect nothing but the best entertainment CGI animation can deliver. However an issue arose from the 3D aspect of the film, as nothing seemed to jump out on me. Perhaps it was the angle I was sitting at (or the fact that Pink Taco & I were wicked close to the movie screen), but I believe that you don't need to see this film in 3D, and instead vouch for the 2D version. Despite this misstep Despicable Me has everything kids and adults can ask for, from fart jokes for the kids to modern-day puns for the adults. Also, stay during the credits for some more menacing minion fun. You won't regret it.