For the most part Dragon Ball video games that have been coming out have been either mediocre fighters (the Budokai Tenkaichi series) or poor adventure games (PS2’s Infinite World). To fix this and hopefully bring back the sanctity of the Dragon Ball name, developer Media Vision decided to go back (way back) to the start of it all: the beloved first series. The main question is: Were they able to create a game that is as good and wholesome as the original anime?

In Revenge of King Piccolo, young Goku must stop both the Red Ribbon Army and King Piccolo from collecting all the Dragon Balls. (For this game Media Vision used episodes 31-122 as the basis for the game.) The gameplay style is that of a classic scrolling beat-em-up mixed with some RPG elements; similar to that of Capcom’s underappreciated Mega Man: Network Transmission. 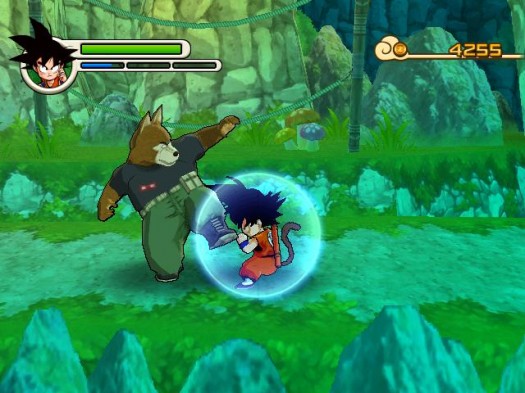 Players have three options to control the game: the Wiimote, Classic Controller and the Gamecube controller. Whichever one a player uses depends on however they’re used to playing video games at this time. For this review let’s look at the Wiimote’s control scheme. The A and B buttons are attack and jump, respectfully. C is block, and Z is for whenever a Lock-On Action can be made. (You can only use this when you see a blue circle surrounding an object or enemy.) To use Goku’s trademark Kamehameha Wave, a player must press the Control pad in any of the four directions, but only when they have enough energy in their Ki Gauge. Though it doesn’t sound complicated, the average gamer may have trouble with multi-tasking. Trying to jump and perform the Lock-On Action can be a pain at times; both on the fingers and the mind. One slip and Goku will have to start from the bottom again. For the most part, though, the controls are fairly easy. 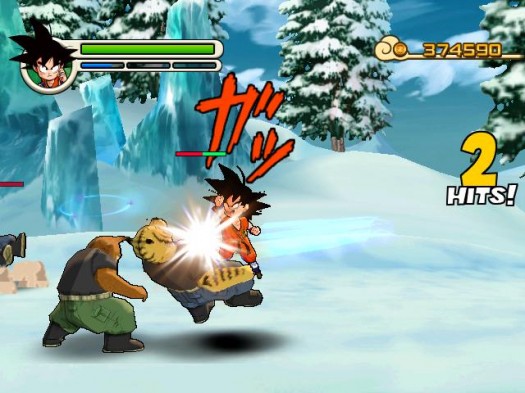 The game first starts out as a mixture of both adventure and fighting games. From Chapters 1-7 players travel through various parts of the classic Dragon Ball world, from Muscle Tower to Baba’s maze. These areas look stunning, as if the anime world could pop through into the real world. However near the final couple Chapters the game switching to plain Fighting Versus mode, which is a shame after being teased in the Opening Credits; with Goku flying into the air to face off against King Piccolo. Not being able to play in those gorgeous-looking areas was a big letdown, and not being able to pilot the Flying Nimbus in a level or two was disappointing. Total gameplay can take at least 10 hours, and that’s without having to go back and looking for hidden treasures to unlock some gaming goodies; so those looking for a longer game should look elsewhere. 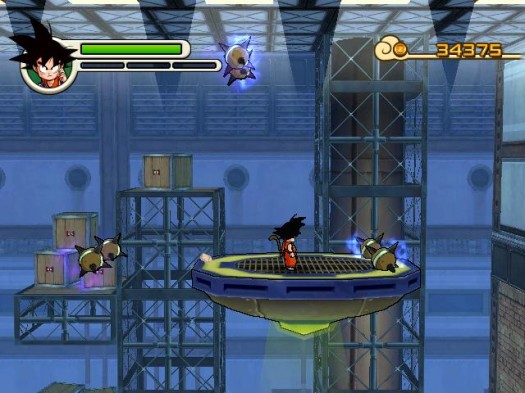 The AI in the game is average, however, with some of the baddies coming at you either directly or like they’re chickens with their heads cut off. Fortunately the latter happens only in small cases. When it comes to dealing with the boss battles they come in two categories: too easy or extremely hard. Villains like Buyon and General Blue may take only a minute or two to defeat, whereas characters like Mercenary Tao and King Piccolo can take days to figure out their strategy. Piccolo is especially tough to beat, as one of his powered-up moves is next-to-impossible to avoid; so expect to take a beating from him. 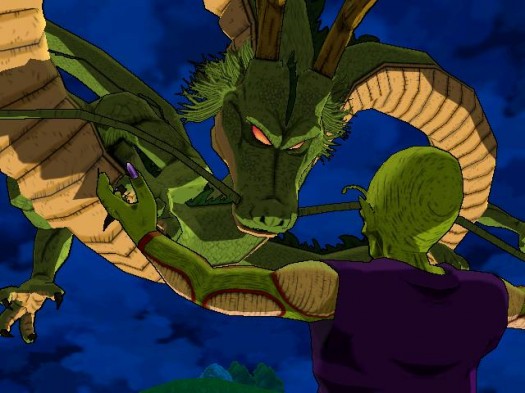 Not only have the original characters all returned, but so are their respected voice actors. (The only exception is Master Roshi’s Japanese voice actor, now done by Hiroshi Masuoka. Kōhei Miyauchi, the original seiyuu, passed away during the making of Dragon Ball Z.) Players have the choice of hearing it in Japanese with subtitles or in English, which was made possible by the folks at FUNimation. And those that would think FUNimation would butcher the opening shouldn’t worry. The game still retains the Japanese theme song “Power of Dreamer” by Hiroki Takahashi (who sang the original anime theme song “Makafushigi Adventure!”). The cut-scene animation is high in quality, but lacks in quantity due in part to the developers choosing pictures and text to mostly tell the story rather than just animating the whole thing. The in-game soundtrack mixes old and new BGM, and the music sounds crystal clear. 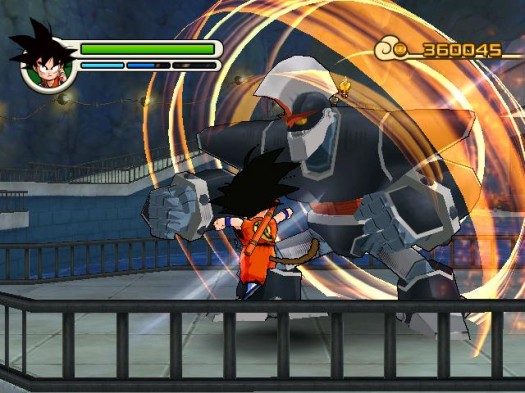 Though some may be turned off by its 2.5D (or pseudo-3D) visuals it does help with giving the feel of the original Dragon Ball series. Besides, the cel-shaded graphics look fantastic. In fact players may at times feel like they’re watching a much-better looking version of the classic anime. Though the Wii may be underwhelming when it comes to graphics (compared to both XBOX 360 and PS3), for RoKP it does a fine justice to the original property. Plus there is little-to-no lagging time, so gamers should be able to load levels without having to wait awhile for them to pop up. 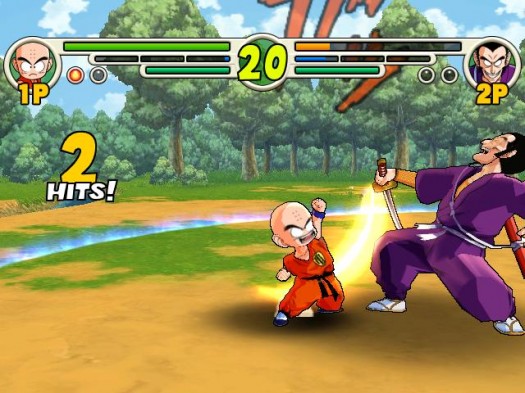 A nice bonus to the game is the 3D VS “World Tournament” segment. Here two players can battle it out as their favorite Dragon Ball characters, from Goku to Master Roshi’s alter ego Jackie Chun. Gamers can also unlock other characters from the series when collecting items in the Adventure mode. The controls are the same as in the story mode game, but each character has their trademark special move. 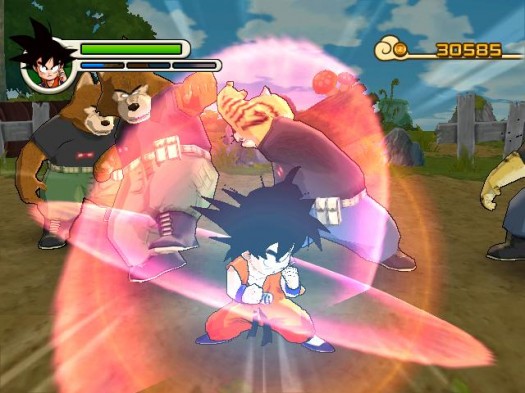 These days, good anime-related games come few and far between. Fortunately Dragon Ball: Revenge of King Piccolo is one anime-based game that will have players clambering for more like it. Granted it has some flaws, but hopefully Media Vision can have them worked out for if/whenever a sequel will be made. Until that time, though, gamers should be a bit happier with RoKP than with any other Dragon Ball game from years past.

Revenge of King Piccolo may be one of the best anime-based games in a long time, but its length and 2.5D look might turn some gamers off. A suggestion would be to rent it at first, but players may be happy to own it soon after. 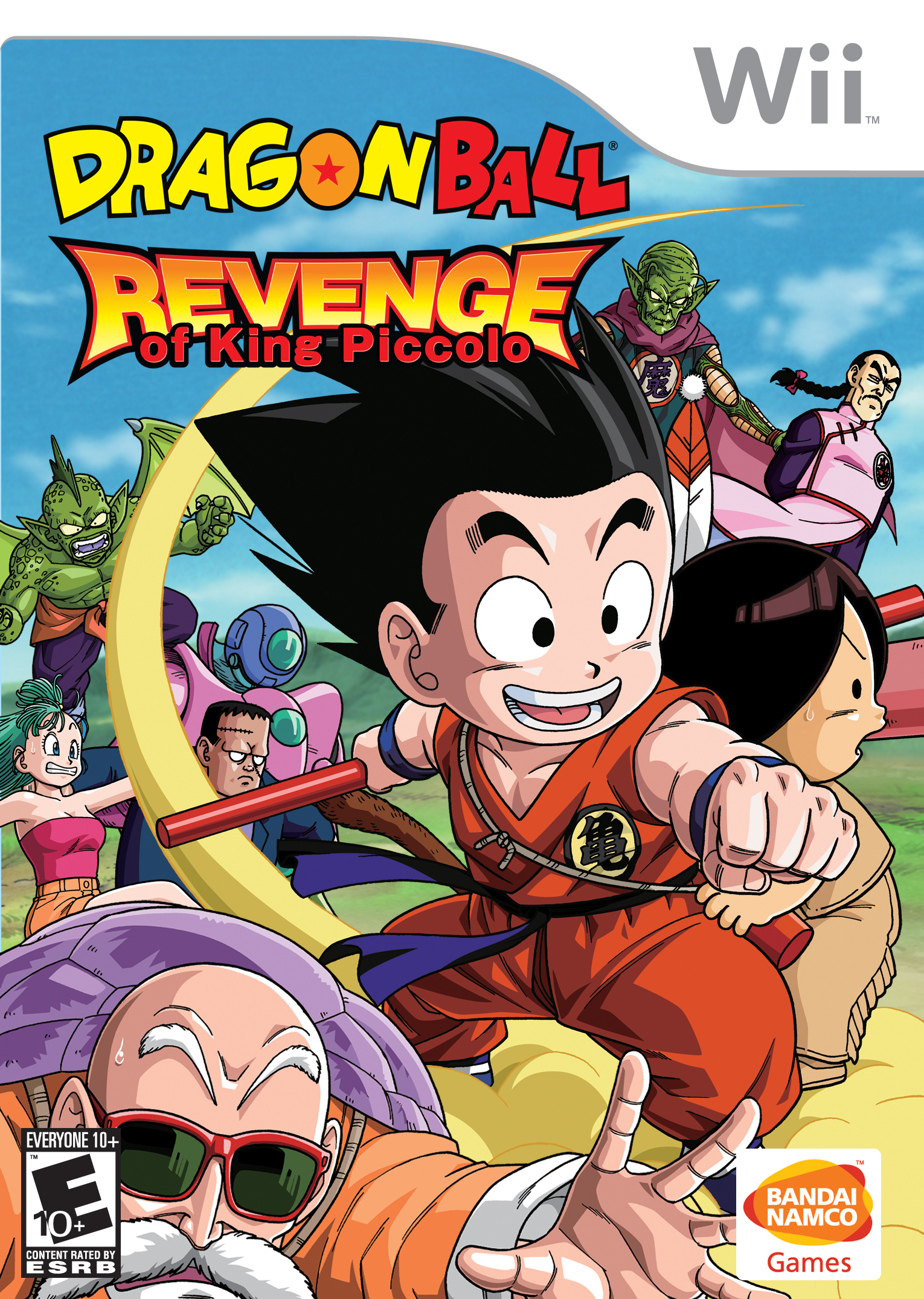 Episode XLVII: Is That Chocolate O...

Episode XLVIII: Back In The Old Da...