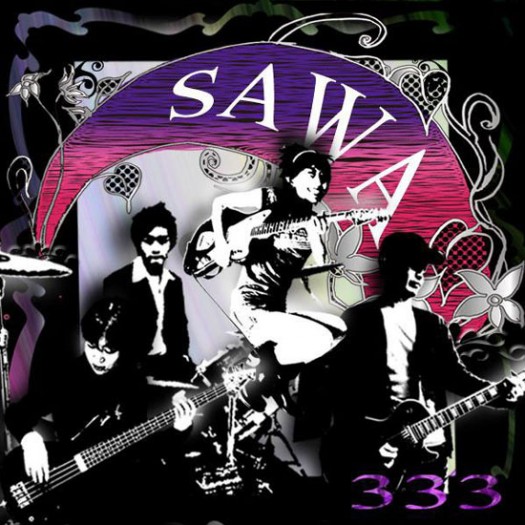 Some may be familiar with Sawa. If you've ever played the DS game The World Ends With You (or すばらしきこのせかい in Japanese) her vocals appears in three of the songs that are featured in the soundtrack. That was merely a taste of what listeners can expect from her eclectic debut album 333.

Released at the end of 2008 333 is a prime example of how an artist should dip into a wide range of styles while having a prime identity. Here Sawa sings, shouts and screams through a diverse batch of tracks that vary from rock and punk to acoustic and pop. Opener "Stay Away" manages to come off like a classic Breeders track, while at the same time keep the edge in vein of Ketchup mania. (Its acoustic version that appears at the end of the album somehow showcases a double-meaning to the song, and whether or not Sawa wants her ex-lover to leave or stay put may be up to different interpretations.)

Sawa comes off as a slick sadistic beast in "Rouser," and lyrics like "drug the nation" sound as if she's about to start a revolution ala Zach De La Rocha. "DOO" is her cry for divine guidance, but when she doesn't receive it she takes the problem head-on and doesn't look back with a smirk. The opening line from "Three" can be a play on the Nirvana track "I Hate Myself and Want to Die," but searching deep in the lyrics the feelings of schizophrenia and confusion can be found within Sawa's playful tone. She also shows off a strong side in regards to channeling other artists, from MUSE ("Dragon," which sounds like something from the band's Black Holes and Revelations years) and the Ettes ("Runaway" and its heavy guitar presence thanks in part to her bandmate Hizmi) to Godsmack (the drug and abuse-influenced lyrics in "BUSTED!") and Neko Case (the acoustic "The Gloss," coming off as if she has lost all hope of finding any sort of connection in this world).

It's in the closing track "One Thing" where Sawa finds her redemption song, and its message of "no pain, no gain" is the meaning found in 333. She gets everything off her chest that has hurt her, and by doing so finds a new purpose in her life. It's this stripped-down side where Sawa bares her soul in order to find her resolution, and succeeds greatly in doing just that.

While this is not a perfect debut for Sawa, there's a lot she offers that is both enjoyable for those on both sides of the Pacific. On top of that Sawa took a risk and made this debut album entirely in English (which didn't fare so well with Hikaru Utada when she did the same with 1998's Precious). For the most part the English transcends well, but there are times where her translations could've possibly been tinkered with a bit. Nevertheless if Sawa doesn't find an audience in her home country, then America and at least the United Kingdom will gladly welcome her with open arms.

Special Thanks to fellow Bostonian Tom Melesky for sending the album for this review.