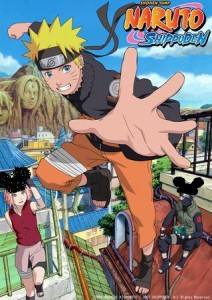 According to the Hollywood Reporter, the anime series "Naruto Shippuden" will begin airing on the new Disney XD, which focuses mainly on shows for the male 12 and older crowd.  This will be the third anime to air on the station (the other two being "Digimon: Data Squad" and "Oban Star-Racer").

The original "Naruto" series aired on the now-defunct Toonami block on Cartoon Network.  No word on how hard Cartoon Network is kicking themselves for losing out on these broadcasting rights, but one can speculate that their asses are quite sore.

The English dub of "Naruto Shippuden" will start airing on Disney XD in October, but people can still watch the original subtitled version on the Crunchyroll video streaming site.

Episode X: I Got Your King Koopa R...