HomeMusicA Queen, A Foo and a Zeppelin Walked Into a Recording Studio...

A Queen, A Foo and a Zeppelin Walked Into a Recording Studio...

A Queen, A Foo and a Zeppelin Walked Into a Recording Studio... 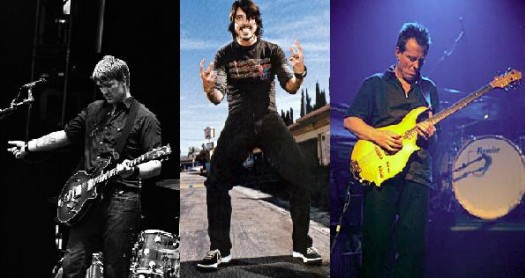 No, this is not the start of a joke.  It's what might be the start of the greatest rock album known to humankind!

According to the NME Josh Homme (Queens of the Stone Age, Eagles of Death Metal), Dave Grohl (Foo Fighters, Nirvana, Probot) and John Paul Jones (Led Zeppelin) have entered the recording studio to work on an album together.  Little is known about the style and sound that is ripping through the speakers in the luckiest recording studio in the world, but according to Mrs. Josh Homme and Spinnerette frontwoman Brody Dalle, the music industry is in for a huge treat.  “I'm not at liberty to talk about it… but I think it is pretty fucking amazing," she said. "Just beats and sounds like you've never heard before.”

For those unfamiliar with these three bands, shame on you!  So to help you out, here are a couple videos from each band:

Now that you've taken a listen to all three bands, imagine how all three of these styles would sound together.  The result will leave the planet in a never-ending mosh pit of ecstasy.  Though no official release date of this unnamed project has been announced, I can honestly bet that we'll be hearing at least a small snippet of it by next year.  Until then, patience is virtue.

UPDATE (August 05, 2009): According to the NME, the trio has announced that they will be dubbed Them Crooked Vultures; and will make their live debut on Sunday, August 9 at the Metro in Chicago.

An Introduction To The Brigade