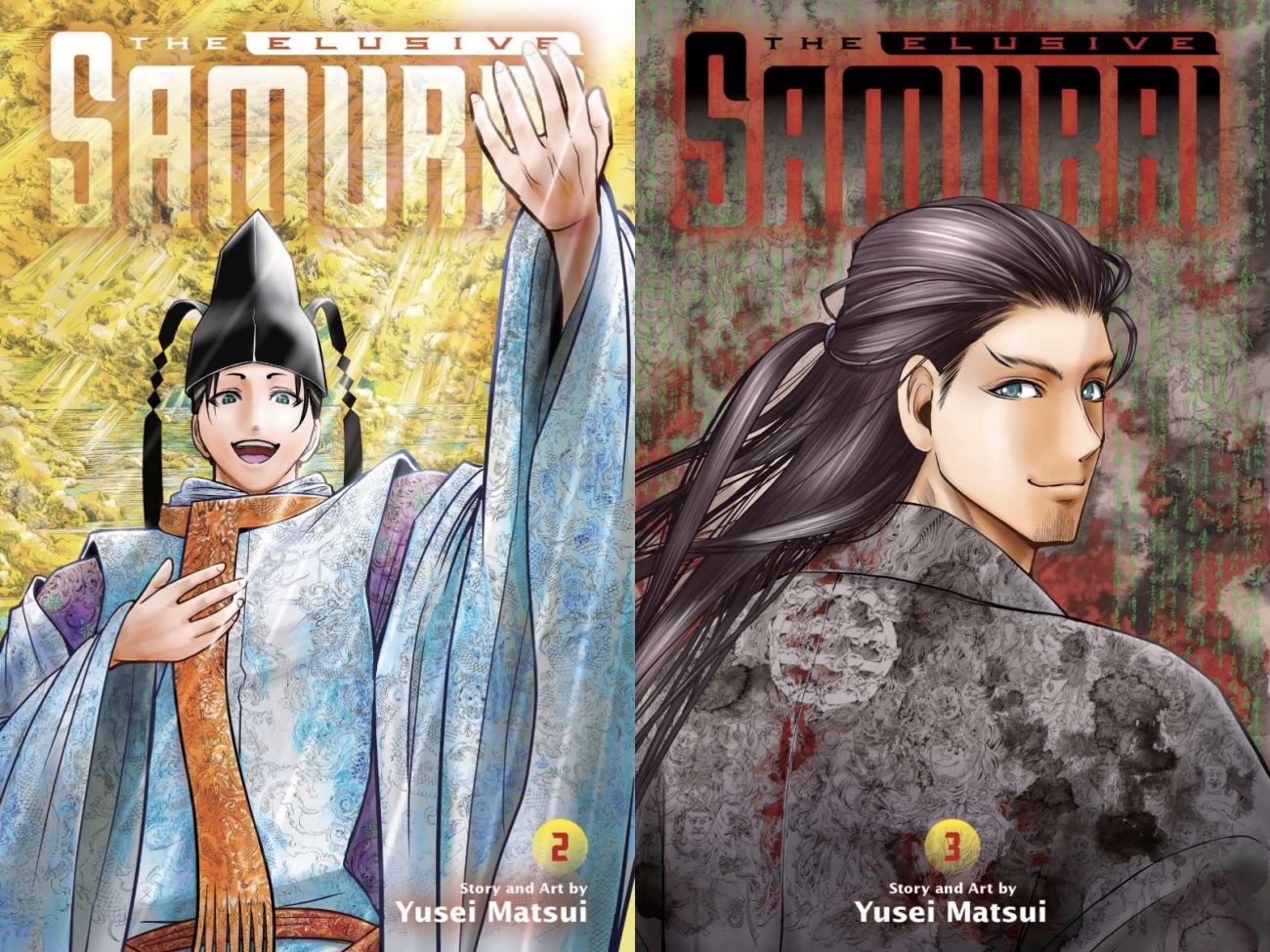 If you can run & hide to live another day, it’s best to do so. That felt like the main gist of The Elusive Samurai, the newest series from Assassination Classroom creator Yusei Matsui. But in retrospect, perhaps it’s best to hide in plain sight, especially when dealing with the most dangerous of enemies. This appears to be the mindset of Suwa Yorishige, who puts Hojo front-and-center against Shinano governor Sadamune in the second volume.

During a dog-shooting competition, Sadamune arrives to lay claim to the province and its people. But Yorishige has a proposition, saying that if anyone beats him in a dog-shooting round, that he will have to leave and never come back. Yorishige chooses Hojo — under the alias of Chojumaru — to be his opponent, which makes Sadamune feel more overconfident. However, said overconfidence may prove to be Sadamune’s downfall. 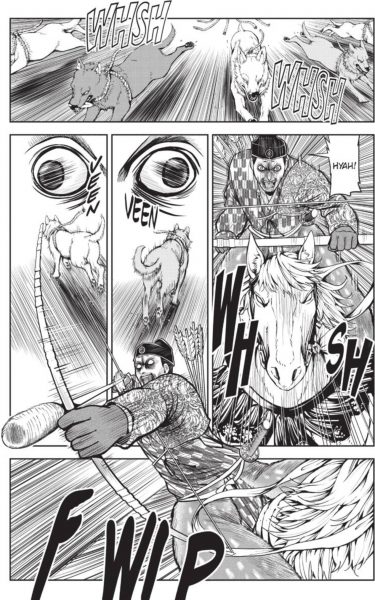 The competition between Hojo and Sadamune is a teachable moment for the young samurai-to-be. Under the guidance of Yorishige, the boy is told about using some of his weaknesses to his advantage. While it’s not clear at first, it becomes apparent that Hojo’s nimbleness makes him quite the horse-rider. Even though his archery skills aren’t up to par yet, his quick reflexes that are normally used to run away are instead his best tools when it comes to scoring points.

It’s here where Matsui’s art style is shown at its strongest. On top of the detail placed in Sadamune’s crazy eyes (which bring to mind classic Ren & Stimpy cartoons), the dog-shooting contest is presented with swift action and beautiful reaction. Yes, it’s a very awful sport they’re playing, but the sight of Hojo making a fool out of Sadamune is almost worth having to sit through some panels where man’s best friend gets hit by arrows. How Hojo earns is victory is also presented with quite the epic hit to Sadamune’s head, in a place that feels like sweet justice for a certain maiden. 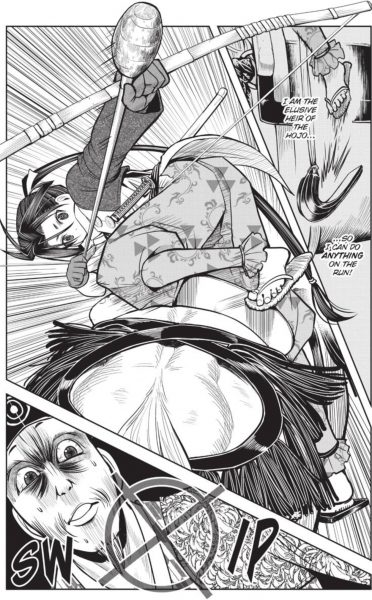 Of course, The Elusive Samurai isn’t one to quickly tell a villain to sod off; Sadamune is a bug-eyed sore loser, after all. When he lays claim to the land via a noble decree, Yorishige tells Hojo to find a thief known as Kazama Genba. His addition to the cast is one that feels shady at first, only for Genba to reveal a philosophy that meshes well with Hojo’s overall plan. It leads to them not so much stealing the decree, but rather doing something…fiery.

Yorishige is also no stranger to his faults. At the turn of the year, his premonitions become foggy, resulting in him being extra careful with Hojo. The visual gags here are very cartoonish, but they fit well with Yorishige’s personality. However, with danger lurking around every corner, it would appear that his cautious ways prove to be evident, as the chapter ends with some bad foreshadowing. 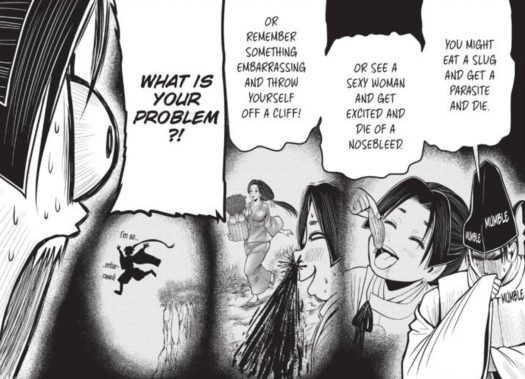 Thankfully, Volume Three instead reveals a new ally for Hojo, in the form of Fubuki. Looking for a lord to serve, the newcomer offers Hojo the chance to learn a new style of fighting. In exchange, he must help the village he’s been watching over, which has had everyone’s parents slaughtered by a gang of ruthless bandits. That leader, who goes by the name Shokan, isn’t just a tough warrior, but one who is the embodiment of all things toxic in the human race.

Soon after Fubuki trains Hojo, the fight to save the children from Shokan and his henchmen begins. Despite their youth and small stature, the children wind up being formidable opponents. Using speed and cunning tricks, they not only put up a solid fight, but they constantly have the upper hand. However, this moment is outshined by what Hojo is able to accomplish. 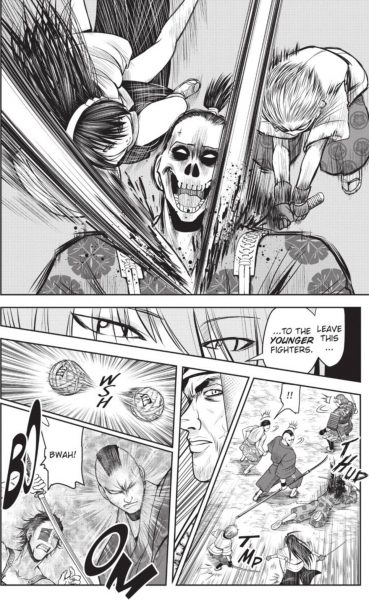 It feels like the fight between Hojo and Shokan has set itself up to being the moment The Elusive Samurai shows its true teeth. As Hojo uses both his skills with the sword and the ways of retreat, the wannabe lord has Shokan in shock by his fighting prowess. But it’s not Hojo’s skills that leave the villain speechless; it’s his glowing, innocent smile! That moment, in my opinion, is where Matsui shows his readers what his hero is truly capable of, as the battle ends with enough brightness to light up modern-day Tokyo!

Yet there’s still Yorishige’s current situation. After the events of the battle, Hojo tries to find every possible cure for Yorishige’s foggy premonition. But because of the things he collects, Hojo begins to be seen as a closeted pervert with some interesting kinks. Thankfully, after a heartfelt moment with Shizuku and the meeting of certain spiritual beings, Hojo pushes Yorishige to set things right…by doing the only thing to put the young lord-to-be in a better light again. 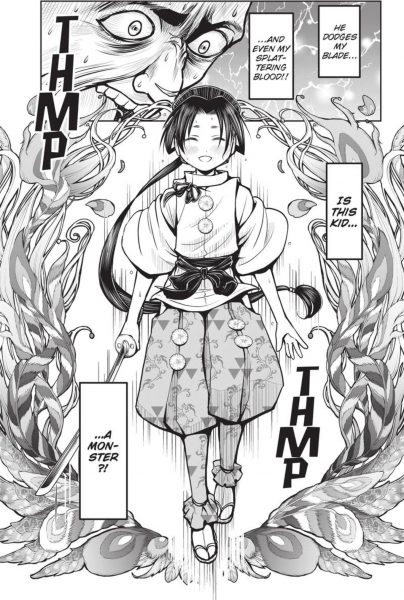 The Elusive Samurai is stretching its legs and eying its destination, with Volumes Two and Three serving as a nice showcase of Hojo’s skills. Yorishige keeps the young boy both cautious and optimistic, even when it looks like the cards aren’t in his favor. But it’s in those moments when The Elusive Samurai shines, especially now with Hojo becoming less of a coward along the way. Will he become the hero he’s trying to be? History says no, but Yusei Matsui’s not one to follow what the scripture says!