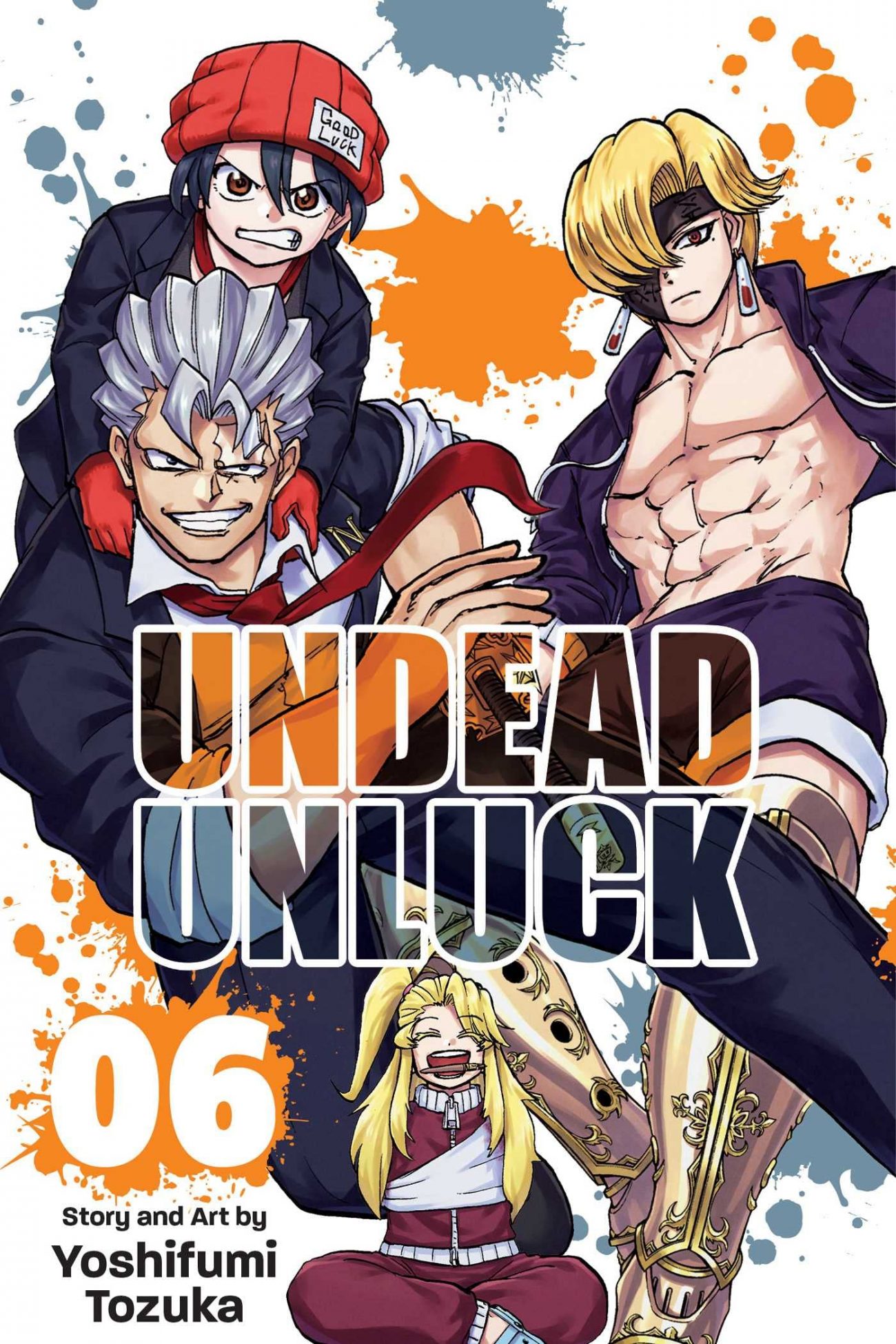 The pen is mightier than the sword. With Anno Un — the author of Fuuko’s favorite manga — now joining the Undead Unluck ranks, it brings a different level of meta writing. A manga author out to help protect the world with their story? Yeah, stranger things have happened, but it’s how Anno Un aids in defeating the beast known as Autumn that makes Volume Six one enjoyable read!

But before the battle can truly commence, Fuuko is still stuck in Andy’s life story. Victor tries his best to throw Fuuko out of his narrative, but Andy arrives to help out in the nick of time. The two selves face off in an epic fight, as Victor realizes how far along he will come as Andy. It leads to a heartfelt conclusion, albeit with loads of explosions, severed body parts, and Fuuko getting an eyeful of Victor’s, erm, you can probably guess. 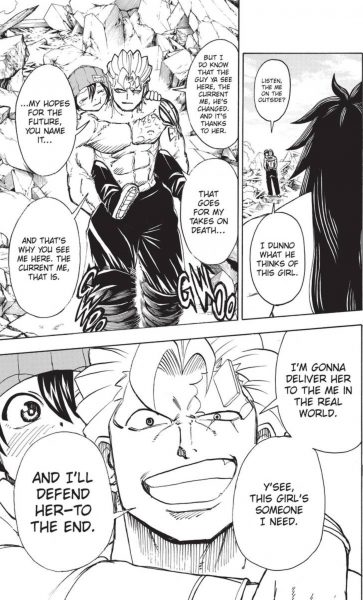 Once Fuuko leaves Andy’s story, the Union gets ready to face off against Autumn. Andy, Fuuko, Rip, Anno Un, and the rest of the crew throw everything they can at the behemoth. As a moment changes from Anno’s original scribes, everything is up in the air as to what happens next. It leads Anno to throw one final push to gain the victory, and it requires a mighty sacrifice.

How Andy and Fuuko bond in this volume was pretty surprising. While the kisses are used more to initiate Unluck, there’s a passion that can be found that’s been slowly building up to that point. There’s a strong possibility that Andy and Fuuko could be turning into a romantic pairing, as they already find that they can’t take on the world (or God, for that matter) without one another. The fact that Andy’s seemingly appreciating life more with Fuuko in his life is proof that her presence has given him a better perspective on things. 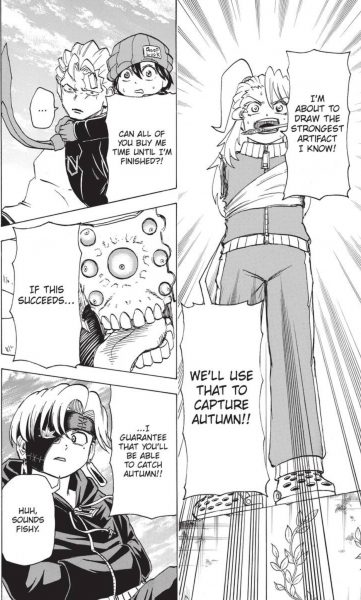 But it’s Anno Un’s story that stands out most in this volume of Undead Unluck. His tale is told with a tragic vibe, as his negator results in him disappearing and not being able to embrace his mother or anyone else. Even with the hardships that he goes through, his quest to tell a great story pushes Anno to keep on persevering. What he didn’t count on was that his creations were actually visions of the impending future.

Fighting Autumn pushes everyone to the brink of extermination, which is when Anno Un pulls off the ultimate sacrifice. Rip reverts to a previous self, much to his anger towards Anno. But it’s all for a good cause, as the Union throws everything they got at Autumn. And then, the big moment finally happens, and it pays off beautifully! 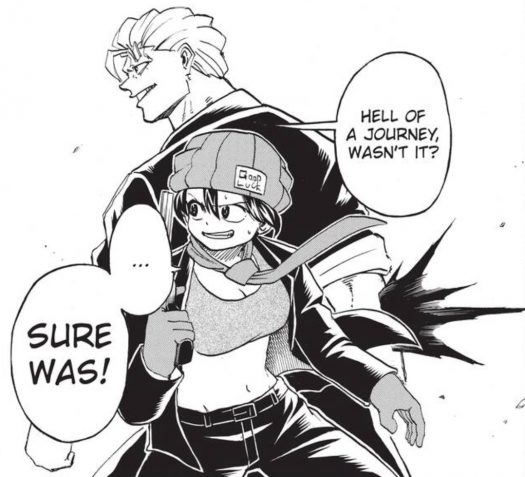 Volume Six of Undead Unluck is filled with excitement and emotion. From Anno Un’s backstory to how Fuuko and Andy grow as a pair, every moment is showcased with Yoshifumi Tozuka’s gorgeous visuals. It also reveals what Anno Un’s story was truly about, and it’s not just a cutesy rom-com. Nay, for sprinkled throughout Anno Un’s tale, is a story of heroes, the very ones that Undead Unluck have thankfully given its readers! 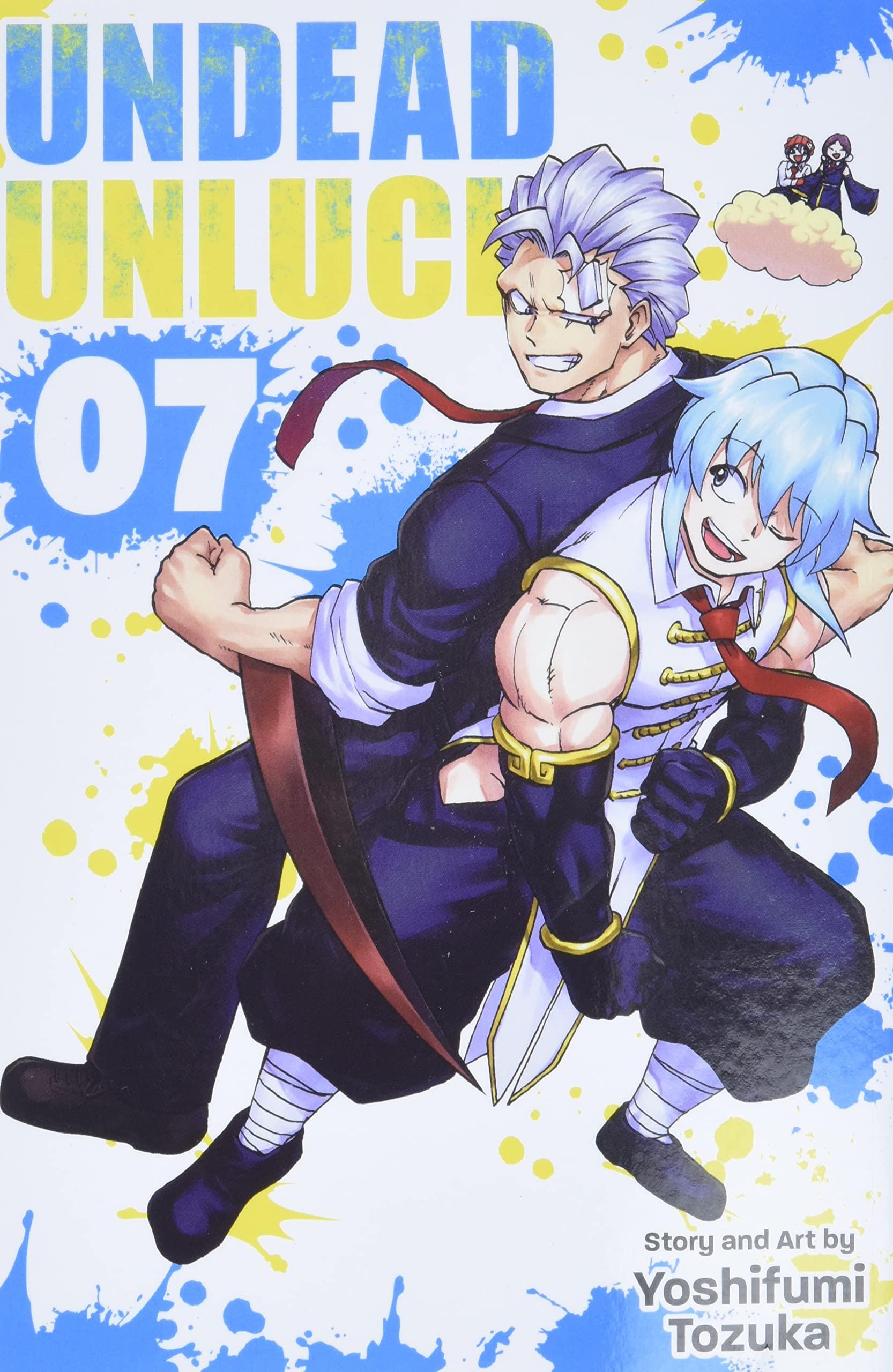 Even when things got kind of meta in the last volume, Undead Unluck still managed to deliver one hell of a shonen narrative. With Autumn now captured, Andy and Fuuko are now tasked to take on their next mission: capturing Summer. (I’m guessing the seasons run backwards in this world, but who’s to say?) Unfortunately, the seventh volume of Undead Unluck takes a step backwards in the quality storytelling department.

But first, Juiz makes it her mission to get Billy to rejoin the Union. It’s a face-to-face battle that starts with words before escalating to violence. And when they exchange blows, one is left standing while the other deals with losing a limb. It’s an intense fight that reaches the philosophical levels that Undead Unluck is very good at. Not only does it amplify the reasons behind why the Union aims to kill God, but also what sort of stakes are at play if other organizations attempt to thwart their plans. 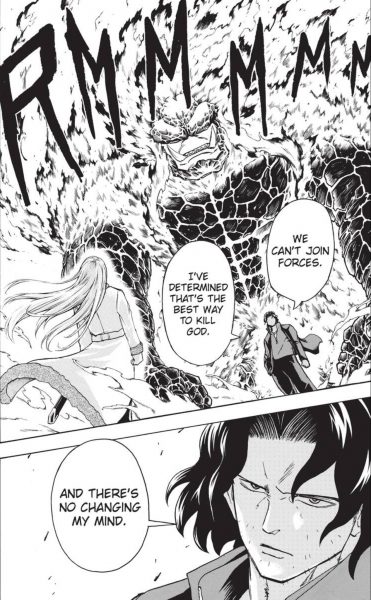 This then leads Andy and Fuuko to head to Taiwan to capture Summer. They rendezvous with Shen and Mui, as they prep for the next big battle. However, a familiar face from Shen’s past appears, bringing out old emotions that involve his dead sister Mei. It’s a moment that churns up a lot of emotion from the one known as Untruth, as it affects his fight with this mysterious foe.

However, one can’t help that this backstory — despite its importance — grinds the main narrative to a halt. There’s a big battle on the cusp of happening, and taking a moment to reflect just as blows are about to be traded does little to build up the anticipation. Instead, it shoehorns exposition that perhaps could’ve served as a prelude to this current arc instead of shoving it smack dab in-between. 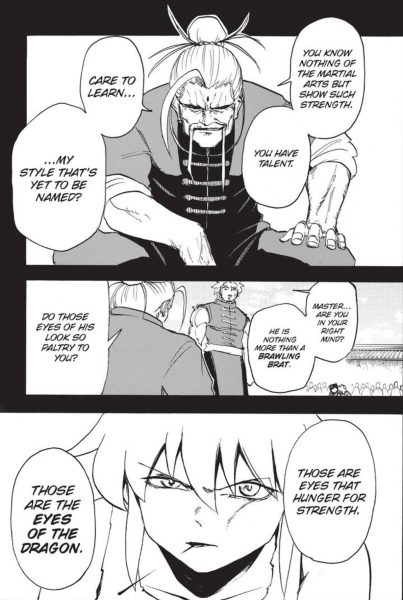 Thankfully, when Andy and Fuuko are brought back into the foray, the excitement kicks back into gear. The fight between them, Shen, and their newest enemy dives deep into threatening situations mixed with its trademarked badass fights. Although the volume ends before the battle concludes, one can predict that this will all end in one hell of a slobberknocker. (How Andy outsmarts the villain is also pretty clever, with a visual that brings forth a moment of beautiful justice.)

There is a lot of good on display in Undead Unluck’s seventh volume. However, it does suffer from some poor pacing in the backstory department. Fortunately, the derailed narrative does find itself back on the tracks by volume’s end, resulting in a slick fast-paced fight. One hopes its impending conclusion will come swiftly and without any other breaks, as Undead Unluck needs to figure out how to showcase a character’s past without pulling the emergency break on its story.