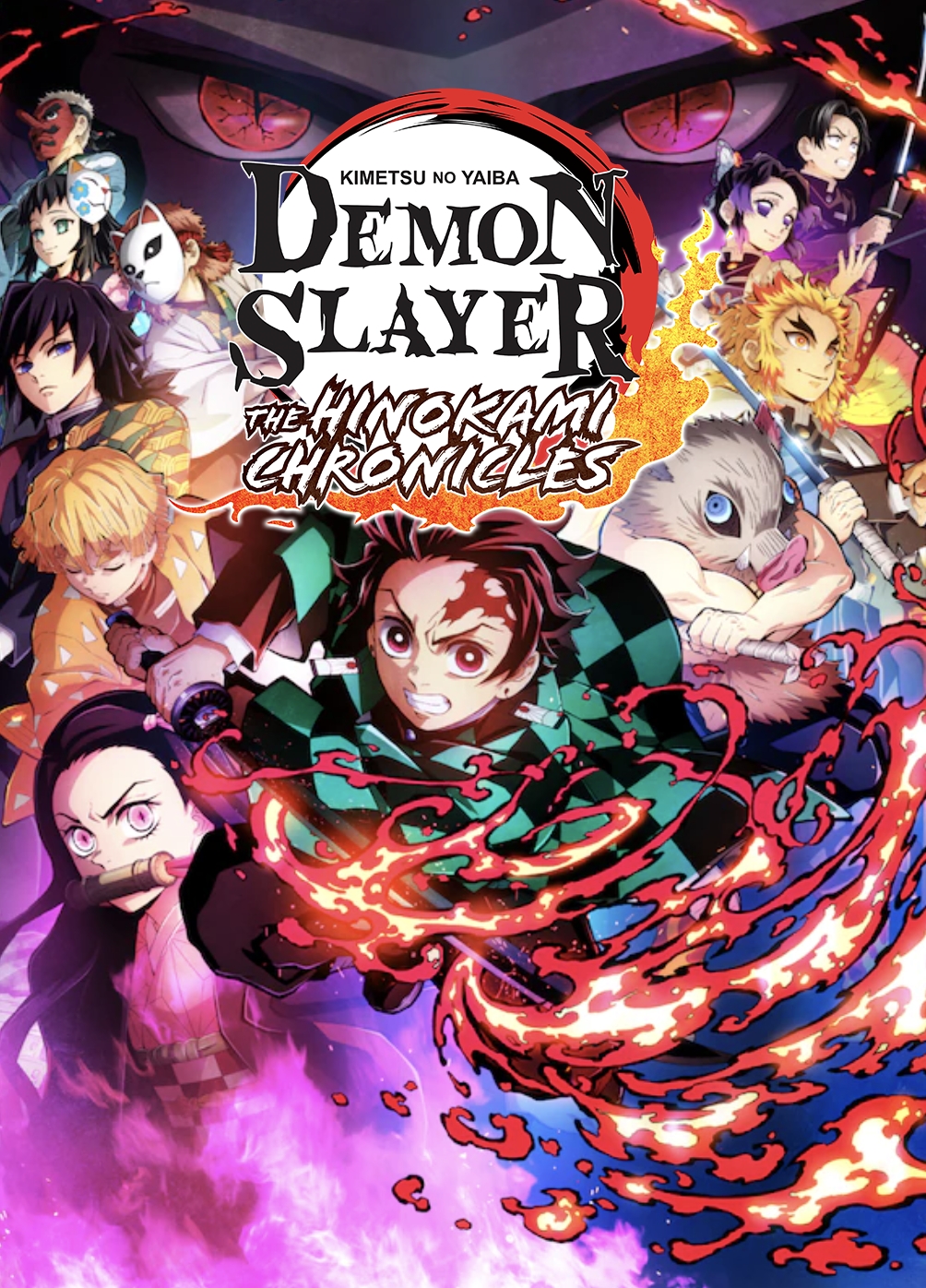 It’s no Taisho secret: Demon Slayer: Kimetsu no Yaiba is the hottest thing to come out of Japan in recent years. Koyoharu Gotouge’s creation has taken over manga shelves, television screens, and has even knocked off Hayao Miyazaki as the new king of the Japanese box office. But can it take hold of the video game market, where Dragon Ball and Naruto reign supreme? After playing Demon Slayer: Kimetsu no Yaiba - The Hinokami Chronicles, the odds of Tanjiro and Nezuko claiming another form of entertainment is looking pretty darn good.

The Hinokami Chronicles places its focus on the first season of ufotable’s anime adaptation and its Mugen Train film. Players start off as Tanjiro, whose family has been slaughtered by demons. His only remaining relative is Nezuko, who has been turned into a demon, but refuses to hurt any humans. Thus begin’s Tanjiro’s journey to become a demon slayer, kill the one who massacred his family, and turn Nezuko back into a human. As the game progresses, players will also get to play as Nezuko, Zenitsu, and Inosuke. 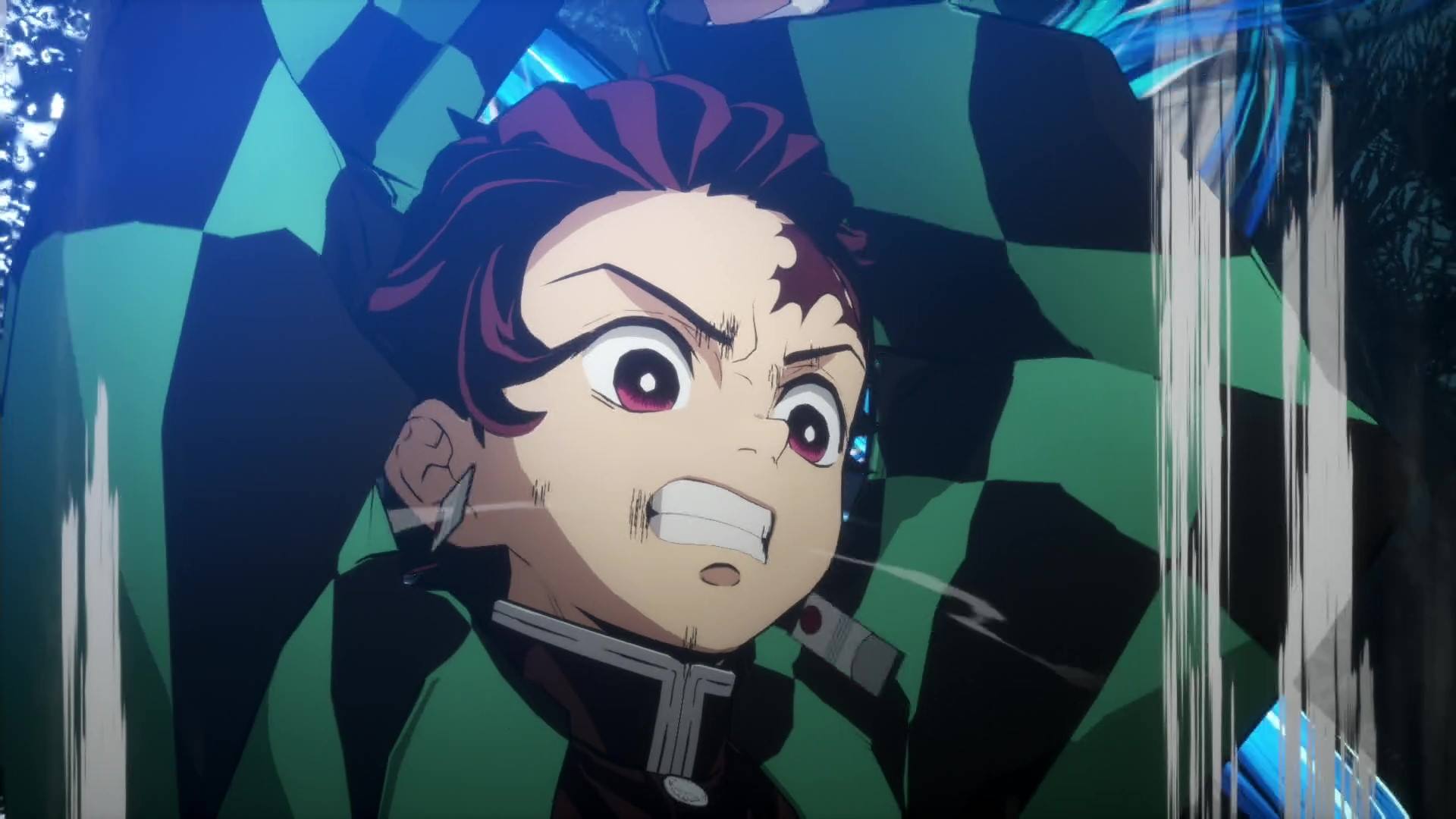 Like the anime, the journey towards becoming the ultimate demon slayer is slow-yet-concentrated. Although Tanjiro will learn his basic and ultimate moves early on in the tutorial, how he uses these skills will evolve with every demon he fights. One can attempt to just go all in like Inosuke usually does, but reading enemy attacks and warnings will allow players to find that sweet spot in both light and heavy attacks. Once you fill your gauge up enough, players can let loose and unleash their ultimate attack, making short work of even the toughest of demons.

As it was in the manga and anime, Demon Slayer’s video game adaptation places story first before gameplay. While those who are familiar to the franchise will no doubt know the narrative like the palms of Tanjiro’s calloused hands, it’s actually fun to revisit these highlights in video game form. Perhaps most impressive is how developers CyberConnect2 were able to bring the visual aesthetic of Demon Slayer into a 3D world. But because there’s a lot of story to get through, some people may find themselves bored looking for a fight to be had. 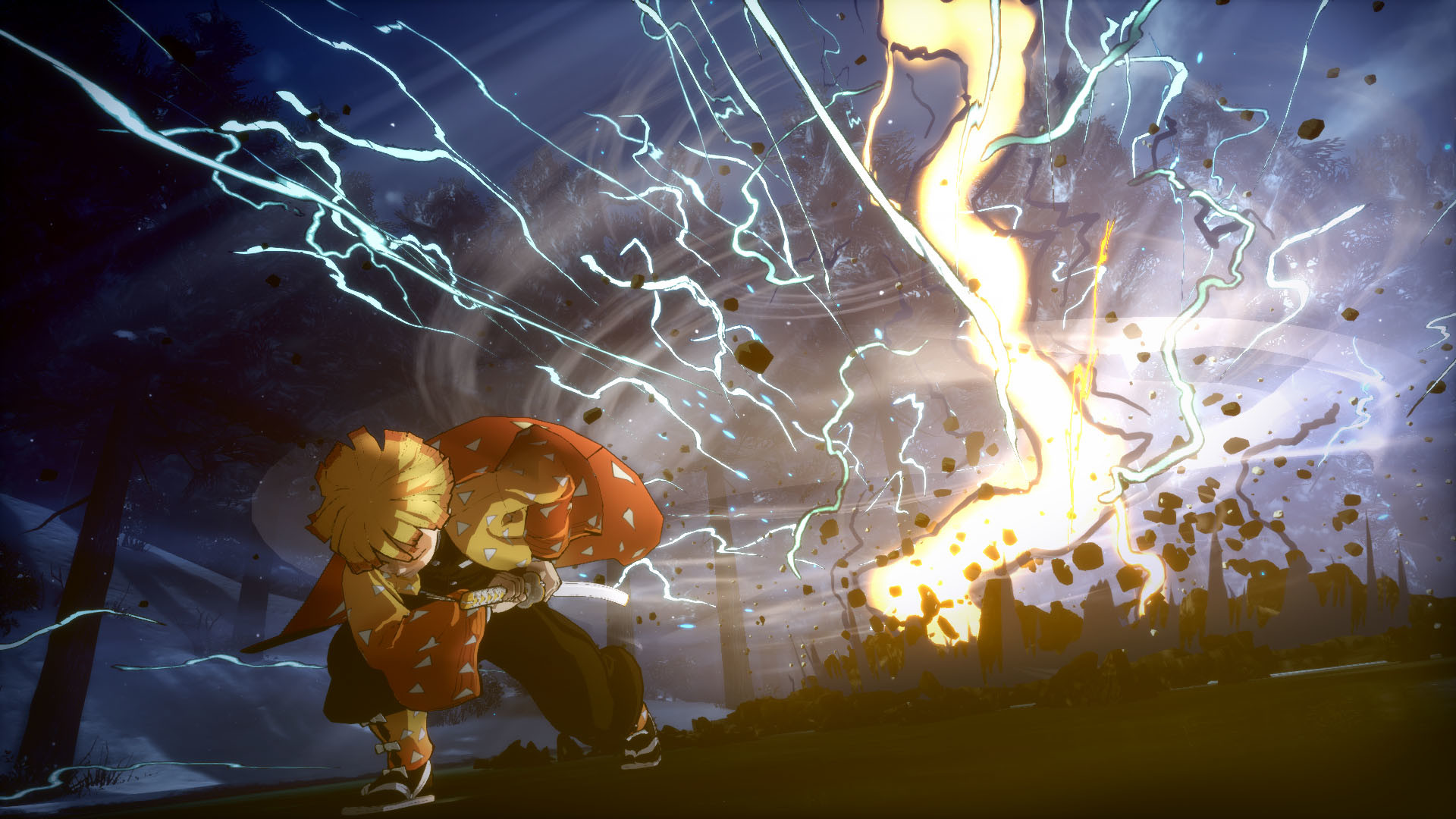 That’s not to say that you’ll find yourself looking at your watch while the story goes by. One of the best things about The Hinokami Chronicles is the way it showcases the emotion of these characters and their situation. From the way Tanjiro angrily calls out to Muzan in Asakusa to the kind-eyed look of Nezuko when her big brother needs to calm down, the way our heroes and villains show their feelings is pretty impressive. Of course, when Inosuke and Zenitsu show up, their insane behavior is captured in annoyingly hilarious fashion! (Trust me: you’ll find yourself laughing your ass off whenever Zenitsu goes into coward mode!)

However, once it’s time to face a demon, the battles are presented with the same level of beauty and detail as its anime counterpart. Every kick, swipe, stab, and special attack is showcased with gorgeous results! Although it sticks to the 3D fighting elements akin to CyberConnect2’s Naruto titles, there’s a great focus placed in the flow of battle. Reading attacks can become easy, but when you start dealing with demons who use other tactics to fight, that’s when the good challenges start to arise! 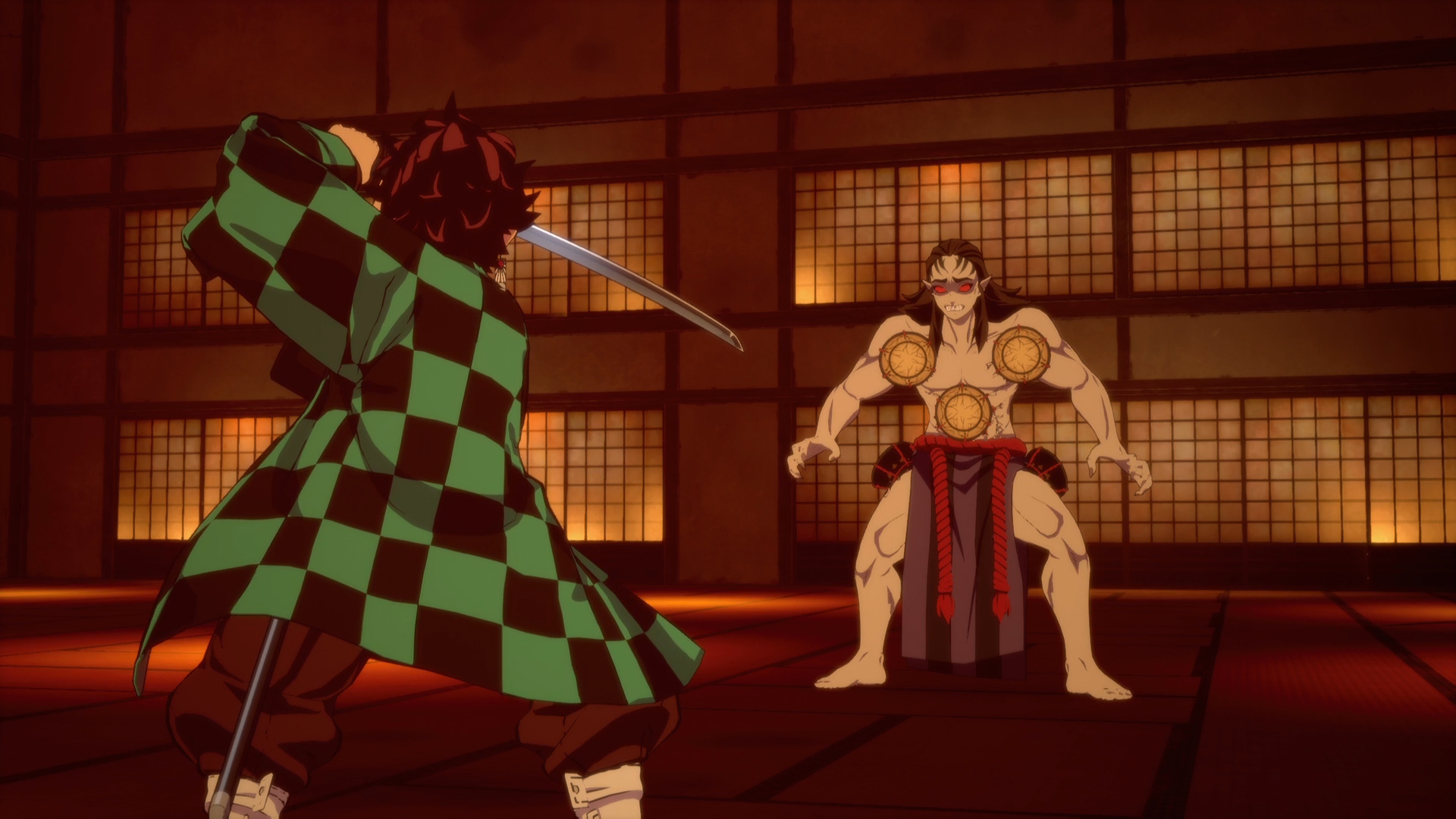 This is best showcased in the levels based on the “Tsuzumi Mansion” arc, where players first take control of both Zenitsu and Inosuke. While their battles are pretty straight-forward, it’s Tanjiro’s fight against the drum demon Kyogai that shows how to showcase the anime in a 3D environment. How the room spins with every drum beat, as well as Kyogai’s means of attacking, become a game of guessing your enemy’s strategy. It takes awhile to get a good read on how to defeat him, but once you figure it out, the payoff at the end (both the defeat and the very funny epilogue) will be truly worth it!

Even though there are a lot of complicated maneuvers showcased in Demon Slayer: Kimetsu no Yaiba, pulling them off in The Hinokami Chronicles is surprisingly easy. Pulling off combos and special attacks are fair game, with blocking and dodging also being a lot easier to handle when the time calls for it. Calling in backup has its perks too, with your choice of partner being no slouch when it comes to offering to help. However, the only downside is that you literally cannot kick a demon when it’s down; you just have to wait for it to stand up again before you can deal out more damage. 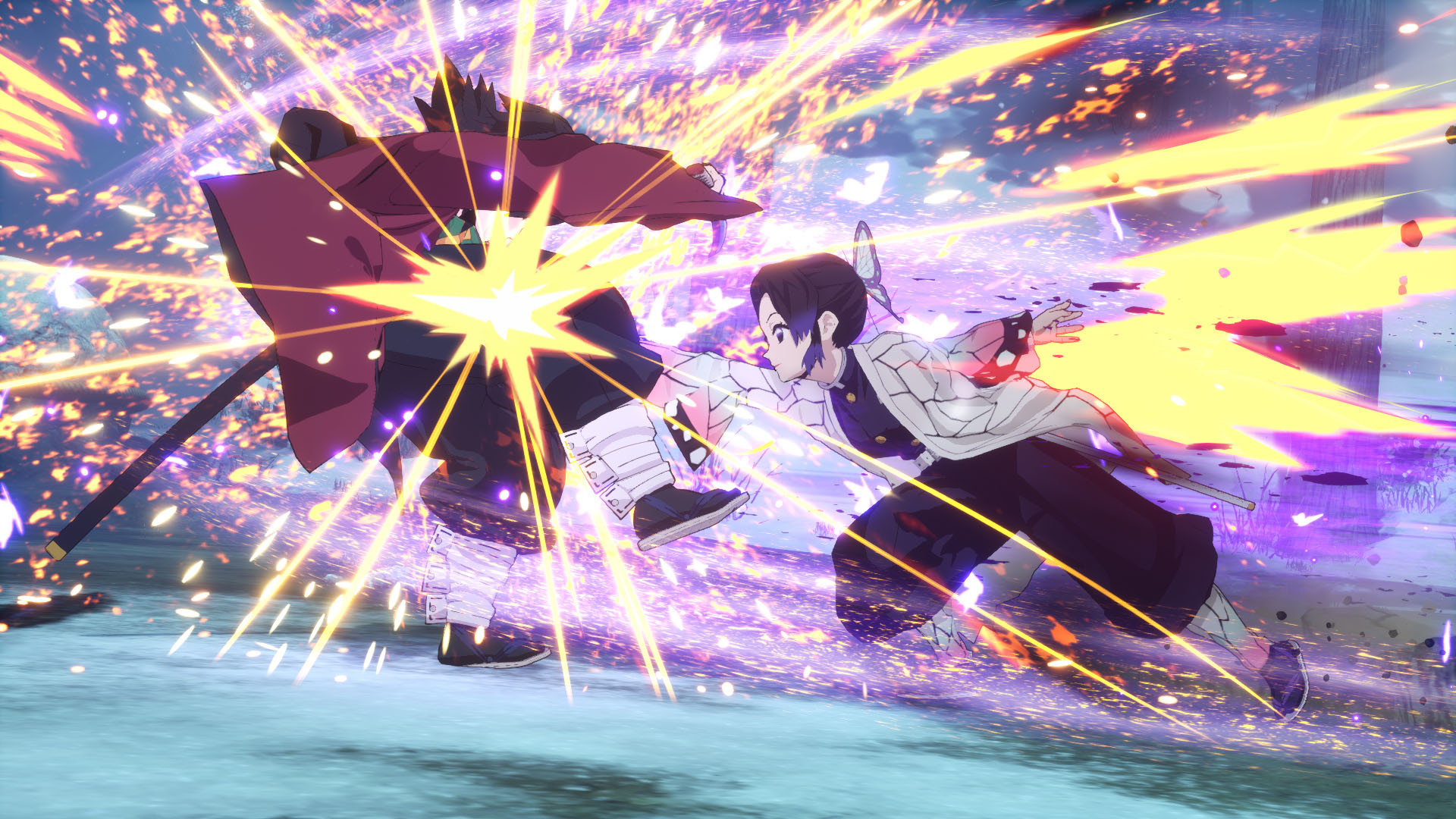 While the main battles are a lot of fun, I cannot help but feel like there’s something missing from the overall experience. The lack of side-quests in the Story Mode is rather unfortunate, as it would’ve been cool to experience these areas of Demon Slayer more in-depth. Side stories are presented more as cinematics, which could’ve easily been revamped into humorous side quests like eating udon very fast or having Nezuko avoid Zenitsu’s advances in a running mini-game. There are bonus demon fights, but they are presented as mere battles without any context behind their reason for drawing weapons.

Once you finish Story Mode, there’s a lot more fun to be had with the game’s online Versus Mode. Players can choose up to eighteen characters from the series, and take on Ranked, Custom, and other forms of fights with friends or complete strangers. My experience with the online mode, despite racking up more losses than wins, was surprisingly great, with me finding someone to battle with at every occasion I put the game on. The one downside is that you’ll have to unlock everyone to play as them, meaning you get slim pickings when you first jump into a fight.

Demon Slayer: Kimetsu no Yaiba - The Hinokami Chronicles brings the popular series to life in new & beautiful ways. Although the Story Mode is very straight-forward, the overall presentation is nevertheless impressive to play and to look at. In a world where anime/manga video game adaptations can be hit-or-miss, The Hinokami Chronicles slays any worries away, so long as one keeps up with their concentrated breathing techniques!

Promotional consideration provided by Zack Reese of SEGA of America. Reviewed on the PS4.