These days, it’s hard to say “No” to the higher-ups. Any sign of disagreement can mean a demotion or — worse — unemployment! Fortunately, there’s a little life tutorial from Studio Fizbin that can assist you on your quest to disagree with power. Via the spirit of the infamous WiiWare anti-classic Muscle March, Say No! More uses humor and zaniness to reach the top of the corporate ladder. However, it doesn’t exactly push through flawlessly.

Say No! More has you taking control of a new intern. They has trouble speaking his mind, with their answers coming out as mere mumbles. However, two things change this intern’s attitude: their lunch is stolen by the company’s head honchos, and the discovery of a motivational tape. In this tape, a muscle man straight out of WrestleMania gives sage advice that’ll help them say “No!” with full power. 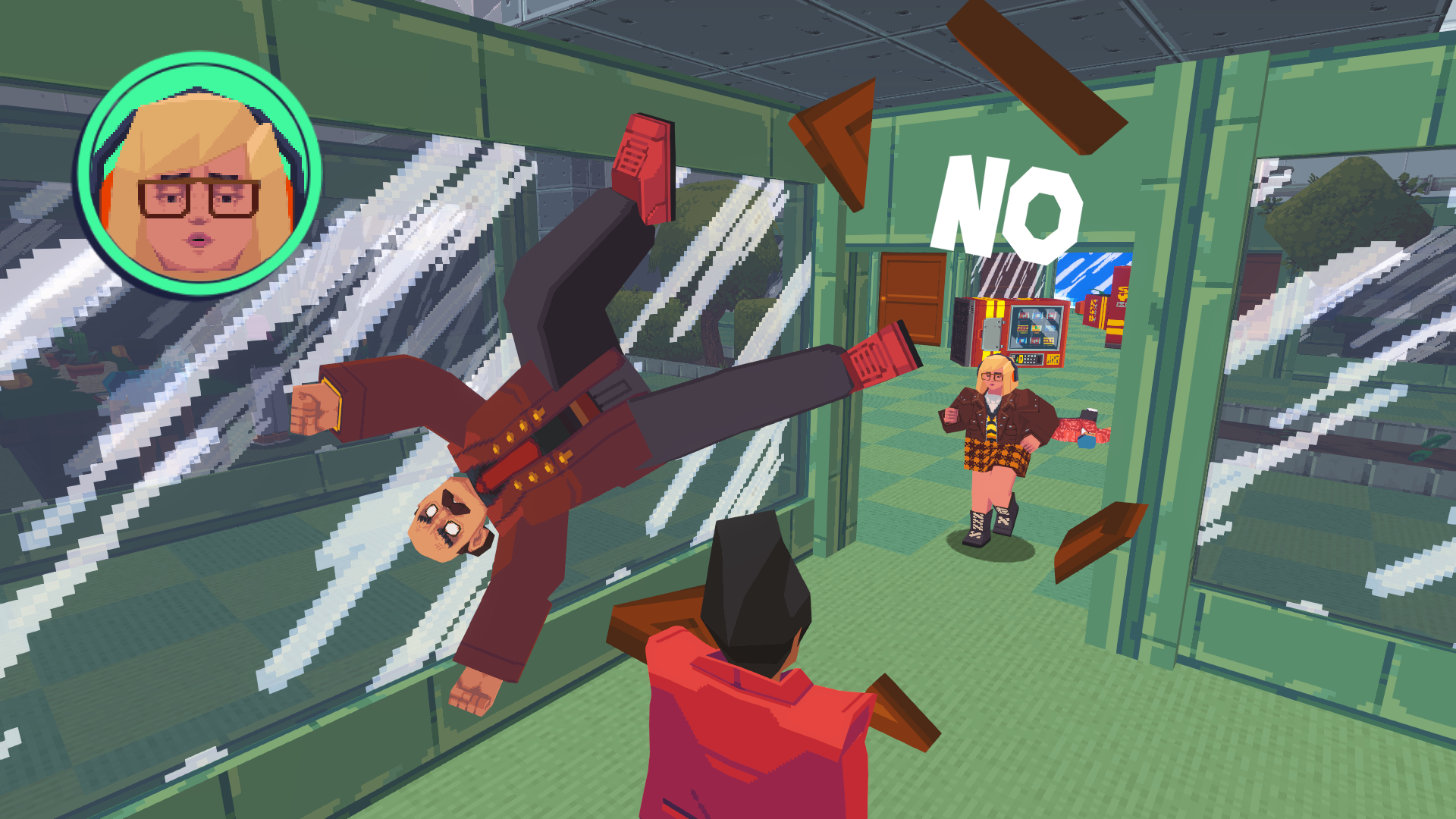 With confidence now in their eardrums, your intern will head on up towards the company’s board of directors in order to procure their lunch. This means having to fend off many employees who wish to dump their work load on you. As you say one “no” after another, you’ll find that there’re nefarious reasons behind why the lower tiered workers cannot disagree with what the bosses dish out. But with the added power of laughter, golf clapping, and even fake pondering, your “No’s” will be the key towards breaking the chains of class oppression.

Studio Fizbin has certainly a good understanding of what would make any gamer laugh, as well as a keen knowledge on corporate oppression. On one hand, you’ll find yourself laughing your butt off with every “No” tossed at your coworkers and bosses. Sometimes they react with mere dejection; in the most extreme cases, you’ll be throwing them through walls and windows, causing hardcore chaos. When these moments happen, you won’t be able to resist giggling like an idiot. 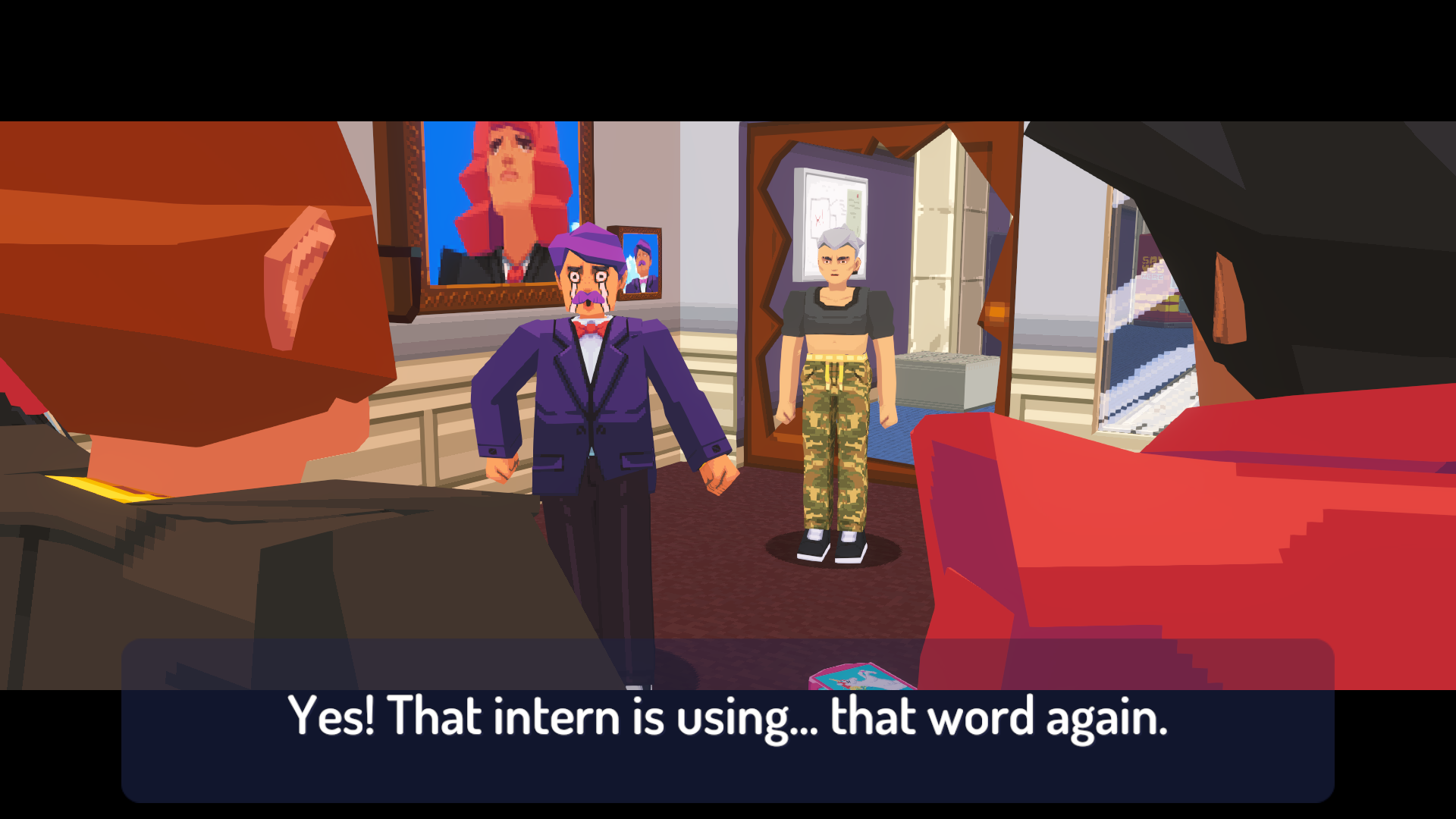 Yet within the silliness is a social commentary of how the work world currently runs things. With the exception of you, everyone does what’s told of them no questions asked. This means working unpaid overtime, coming in on your days off, and running gofer tasks that most people should just be doing themselves. But when your intern learns the power of disagreement, a true revolution in the workplace begins.

The best way to describe Say No! More’s gameplay is “rail-based”. You unfortunately don’t roam freely in the game; you simply move along with the story and wait to throw your “No’s” at your coworkers. It’s a mechanic that’s very humorous, but one wishes it could’ve been implemented in either a 3D platformer or FPS-styled environment. As such, the game feels more like an interactive story rather than a full-fledged experience. 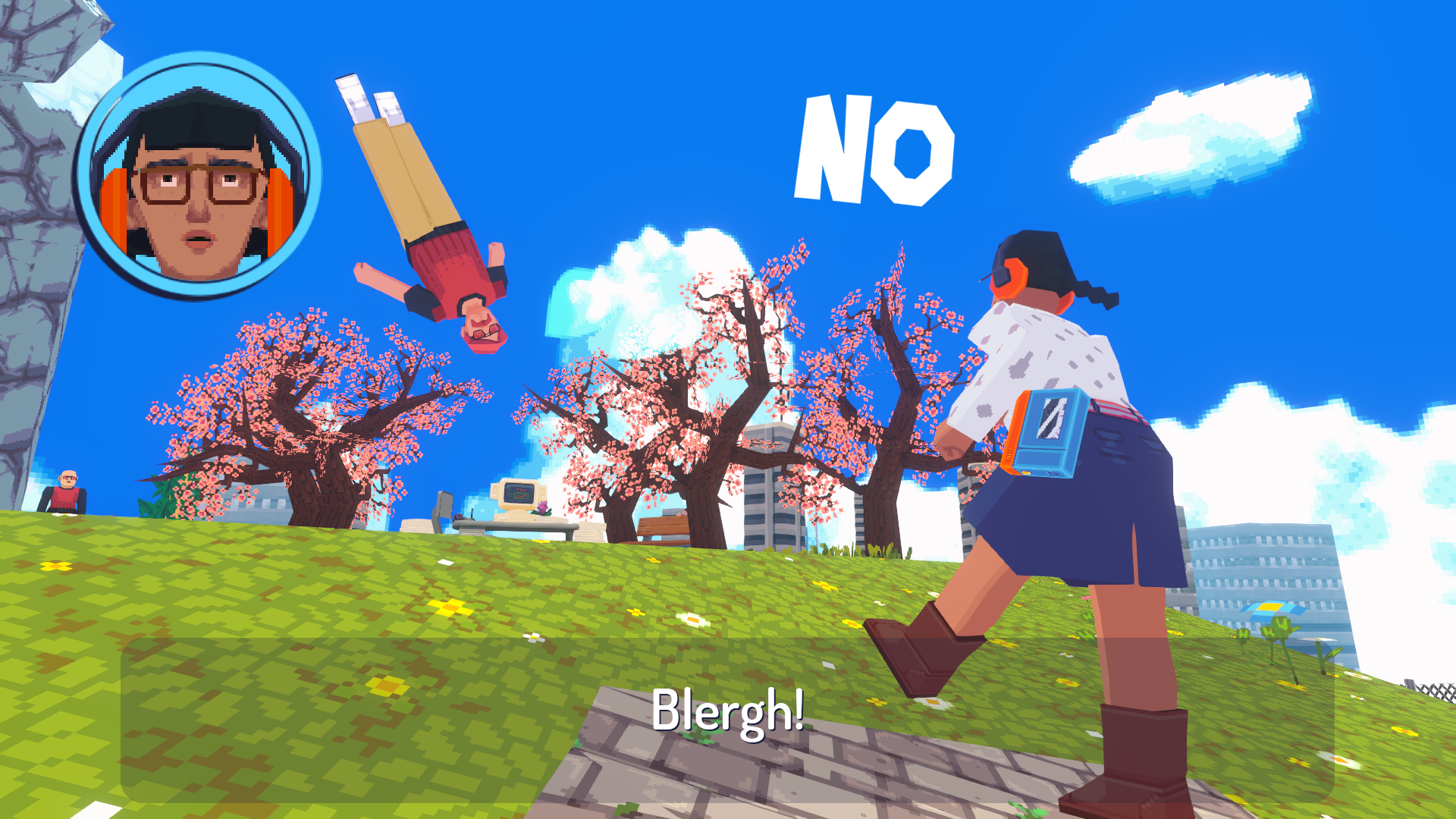 Its concept is a pretty funny one, but it can sometimes feel like a one-note joke. Despite the addition of cold, lazy, and wacky “No’s!” — as well as the ability to reject in many languages — the gag overstays its welcome due to its lack of other techniques. Because of this, by the time the game finishes one hour later (yes, it’s a wicked short one!), the joke has tired itself out. And once you’re done with Say No! More, you’re more than likely to not revisit it anytime soon.

One thing I can throw praise at is its visuals. My mention of Muscle March earlier is by no sheer coincidence, as the pixel-like graphics (as well as its stolen food-related story) bring to mind that silly game. Although they’re more Minecraft-like than PS2-era, the characters and worlds have a nice feel of nostalgia to them.

Say No! More is a very funny concept, but its execution isn’t perfect by any means. Clocking in at just over an hour, Studio Fazbin’s concoction is more fun to look at than it is to play. It has potential to expand into over avenues, but for now, Say No! More feels more like a corporate party you’re forced to attend than a legit off-the-rails kegger.

Promotional consideration provided by Jeffrey Matulef of Plan of Attack. Reviewed on the Nintendo Switch.