When you think of what could’ve happened between the time Senku was frozen in time and awakened in Dr. STONE, the possibilities can be somewhat limited. With the entire world trapped in stone, it’s tough to imagine what kind of tales could be spun before humanity’s reawakening. Artist BOICHI takes a crack at telling a side-story from his partner-in-crime Riichiro Inagaki’s narrative, resulting in a tale about both humanity and machinery trying to survive.

Dr. STONE Reboot: Byakuya takes place throughout the over 3700 years when the Earth is trapped in stone. Above in space, Senku’s dad Byakuya and the crew of the International Space Station witness the calamity occur from the safety of the ship. With time running out, the crew race to get back to Earth to save the human race. However, when the humans leave the ship, the real story begins! 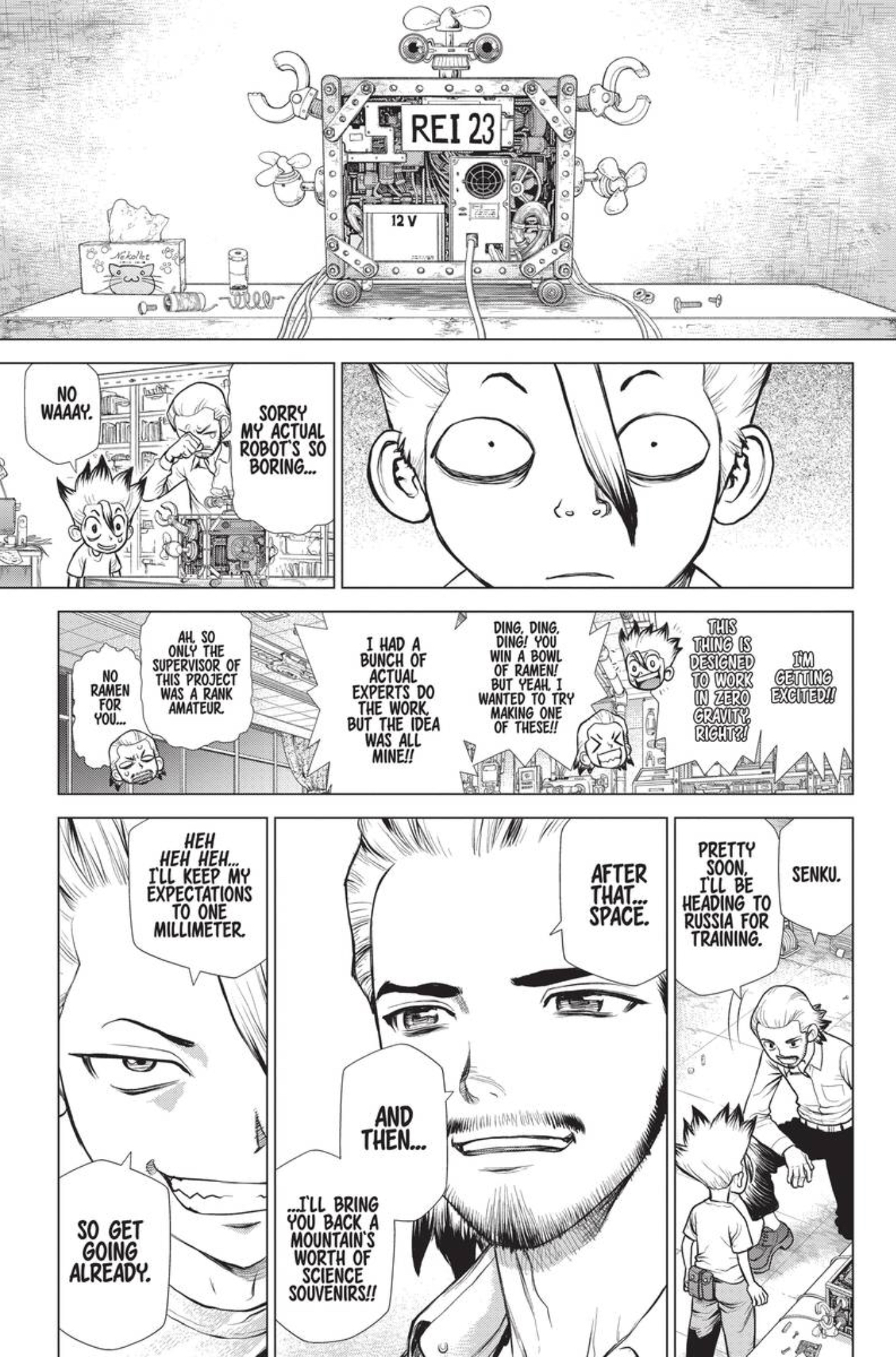 Alongside the humans is Byakuya’s robot creation Rei, who takes in both the intelligence and the personality of his creator and son. Once the crew leaves for Earth, Rei’s life continues to hover above in space, hoping that they’ll return one day. But as years and centuries go by, Rei must repair both the Space Station and itself, resulting in many outside-the-box experiments to keep everything afloat. From gathering water to repairing its motherboards, Rei’s quest to reunite with humanity is one that spans many a generation.

People who have read Dr. STONE will know what exactly happened with Byakuya and the crew after landing back in Earth. There are some interesting tidbits about the likes of singer Lillian and Russian astronaut Yakov, some of which you’ll see spill into the more familiar cast of the Kingdom of Science. For their part in this spinoff, it can be entertaining, but it doesn’t exactly give us information that’ll be detrimental to the main series. 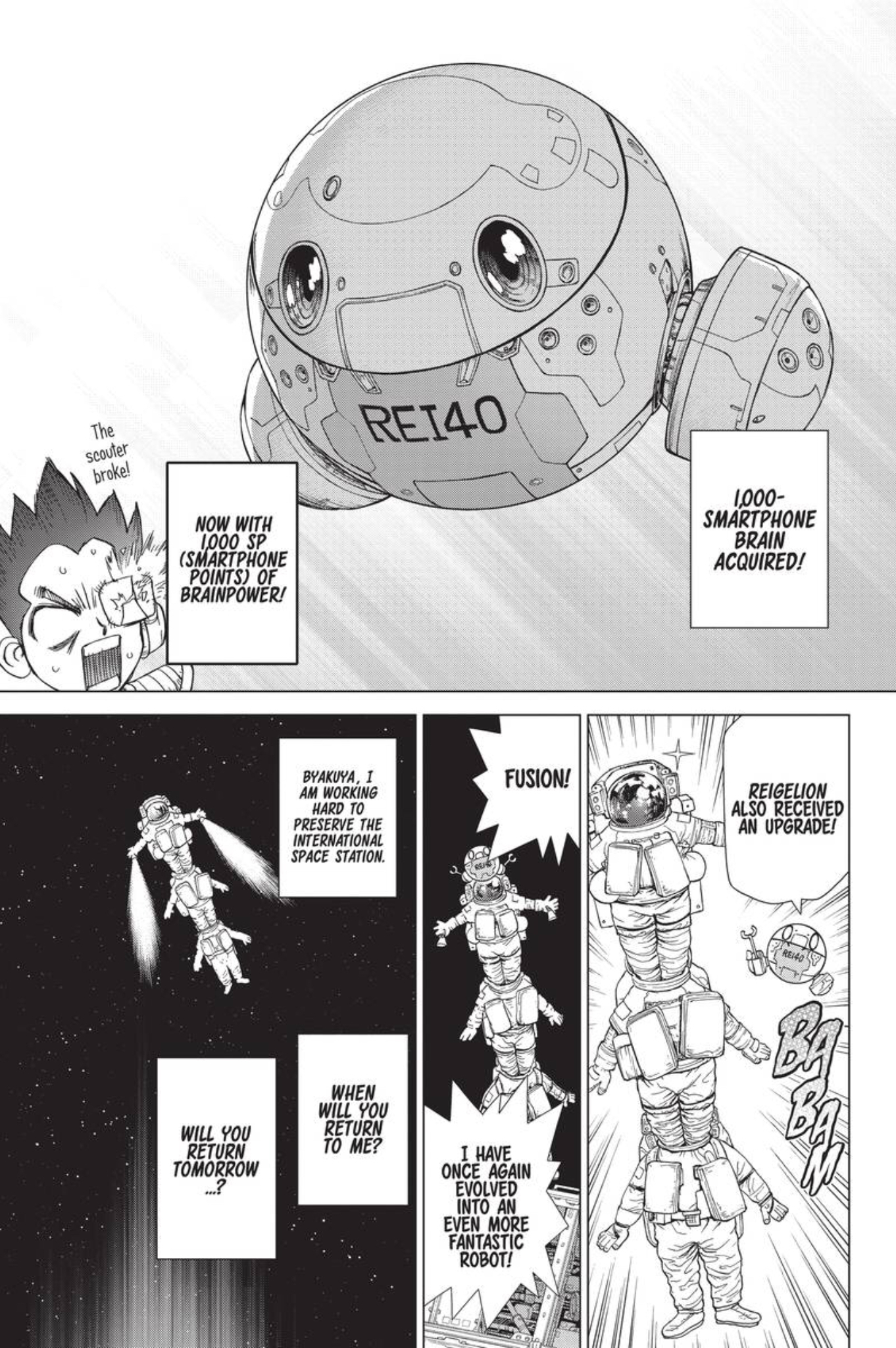 However, when the focus moves to Rei’s journey, that’s when the wow factor we’ve come to love from Dr. STONE arrives. It becomes a one-robot showcase of scientific breakthroughs and jaw-dropping feats, all of which is factually accurate! (BOICHI worked with a science consultant who spent time on the International Space Station, going back-and-forth to make sure what is presented is something that is possible.) While we’re still a few years away from having a robot that’s as smart and durable as Rei, the fact that most of what’s presented has been shown to work is quite stunning!

In the manga’s intro, BOICHI mentions that this story is somewhat of an alternate universe retelling. With that being said, it would be very interesting to see if Inagaki were to find a way to have Rei’s narrative fit into Senku’s. While it has some storytelling flaws here and there, one cannot help but be impressed by what BOICHI has crafted with Dr. STONE Reboot: Byakuya. 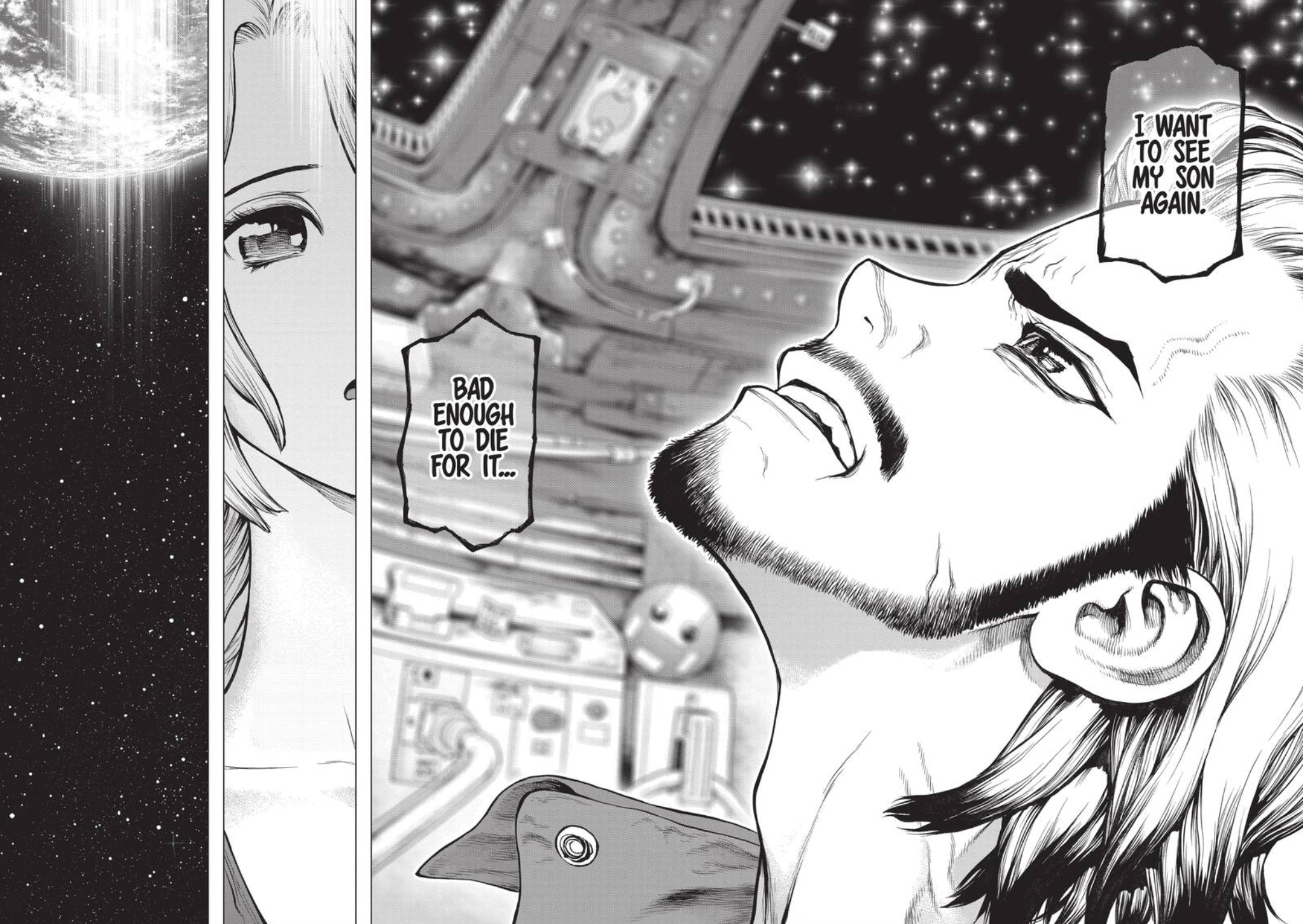