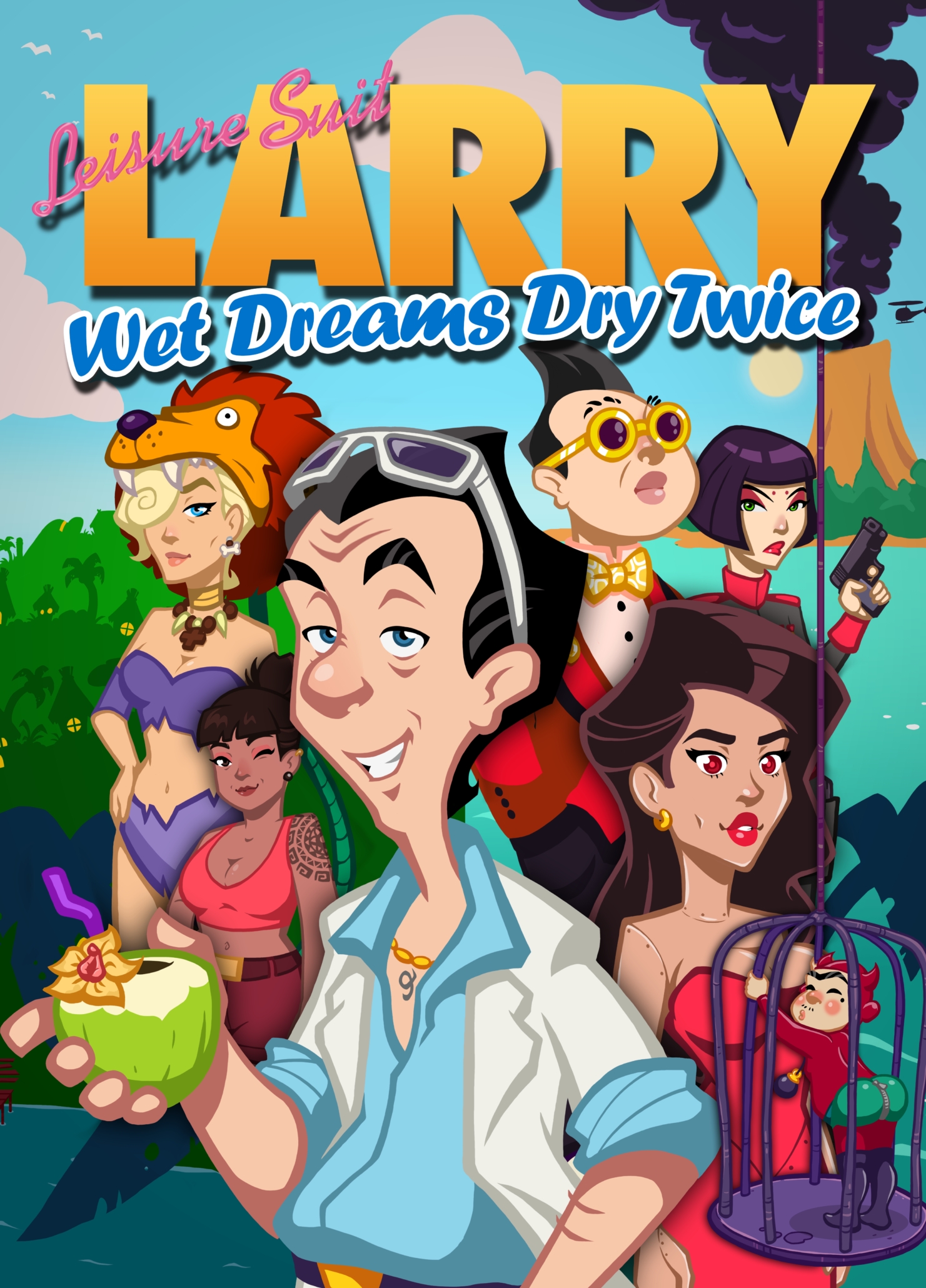 Leisure Suit Larry should not have a place in this modern age. The horndog point-and-click adventure series was scandalous even in its own time, so imagine how some people would react to the older games. And yet, Assemble Entertainment proved us wrong a couple years back with Leisure Suit Larry: Wet Dreams Don’t Dry, a game that was shockingly funny and — dare I say — a fine compromise for retro and current gamers. Once again, the lanky libido leader defies all logic and reason in its follow-up Leisure Suit Larry: Wet Dreams Dry Twice.

Taking place immediately after the events of Wet Dreams Don’t Dry, players find Larry right in the midst of being wedded to a mysterious woman. But as luck would have it, the female lead Faith Less is still alive, giving Larry all the motivation needed to search for her. With the aid of the snarky AI Pi, Larry sails the dreaded waters and visits multiple islands to get the girl that almost got away. Meanwhile, Prune Enterprises is in the midst of a takeover, with an evil leader and his #1 spy on Larry’s trail for nefarious reasons. 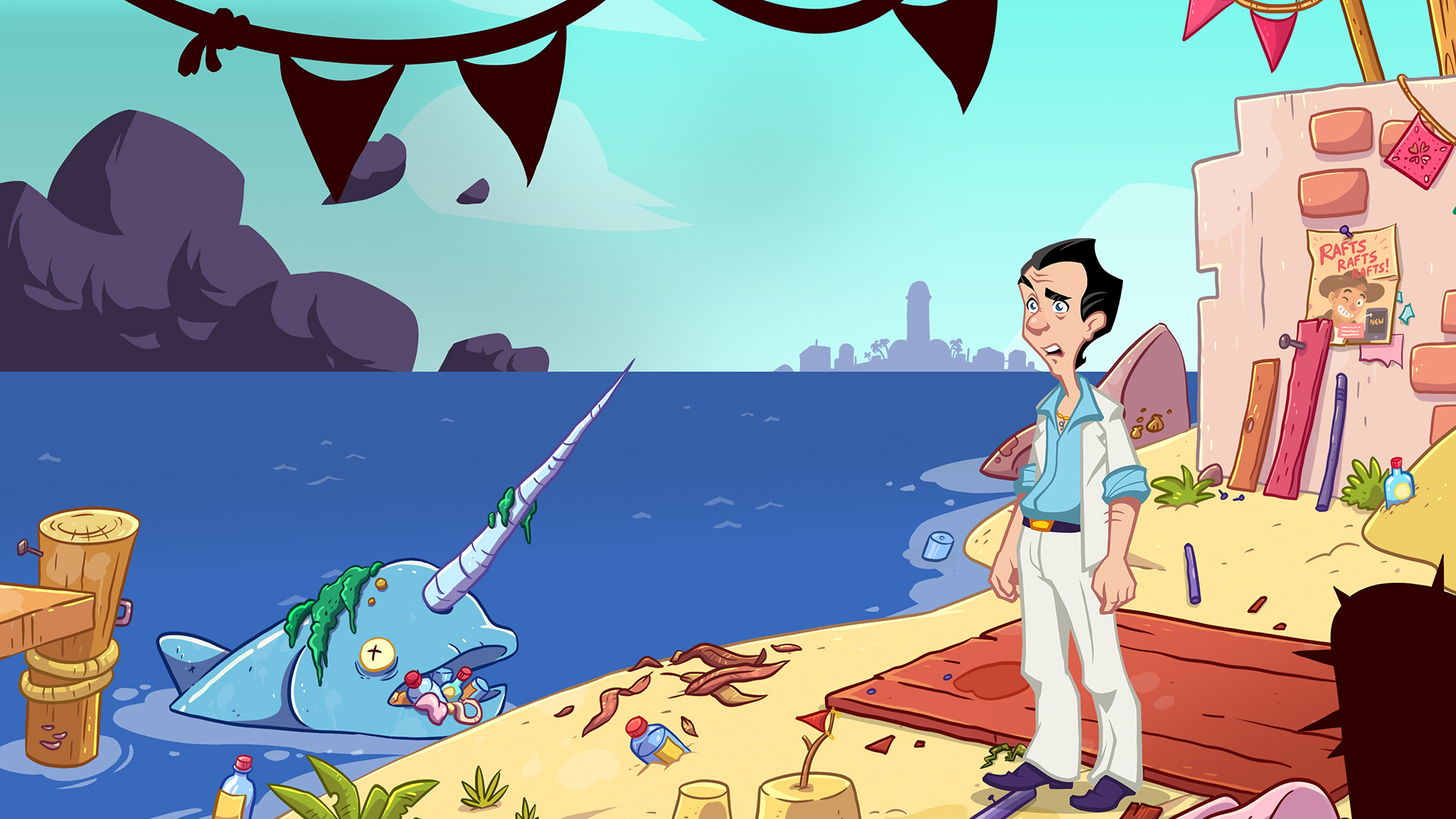 Right away, players know what they’re getting into when they see Leisure Suit Larry in the title. The game is chock filled with sex jokes and visuals from sea to shining sea, with enough vulgar imagery to make any concerned parent gasp in horror. But it wouldn’t be a Larry Laffer adventure without the steamy elements, and thankfully it’s as unapologetic as it is funny. It’s also — once again — a great point-and-click throwback.

Like all of those classic Sierra titles back in the day, Wet Dreams Dry Twice relishes on letting players explore their surroundings. Clicking on almost everything will reveal all sorts of gags, surprises, and even deaths! (Thank you Assemble and developers CrazyBunch for adding more way for Larry to croak this time around!) Though not every jokes works, there are more that hit the funny bone properly than the ones that don’t. 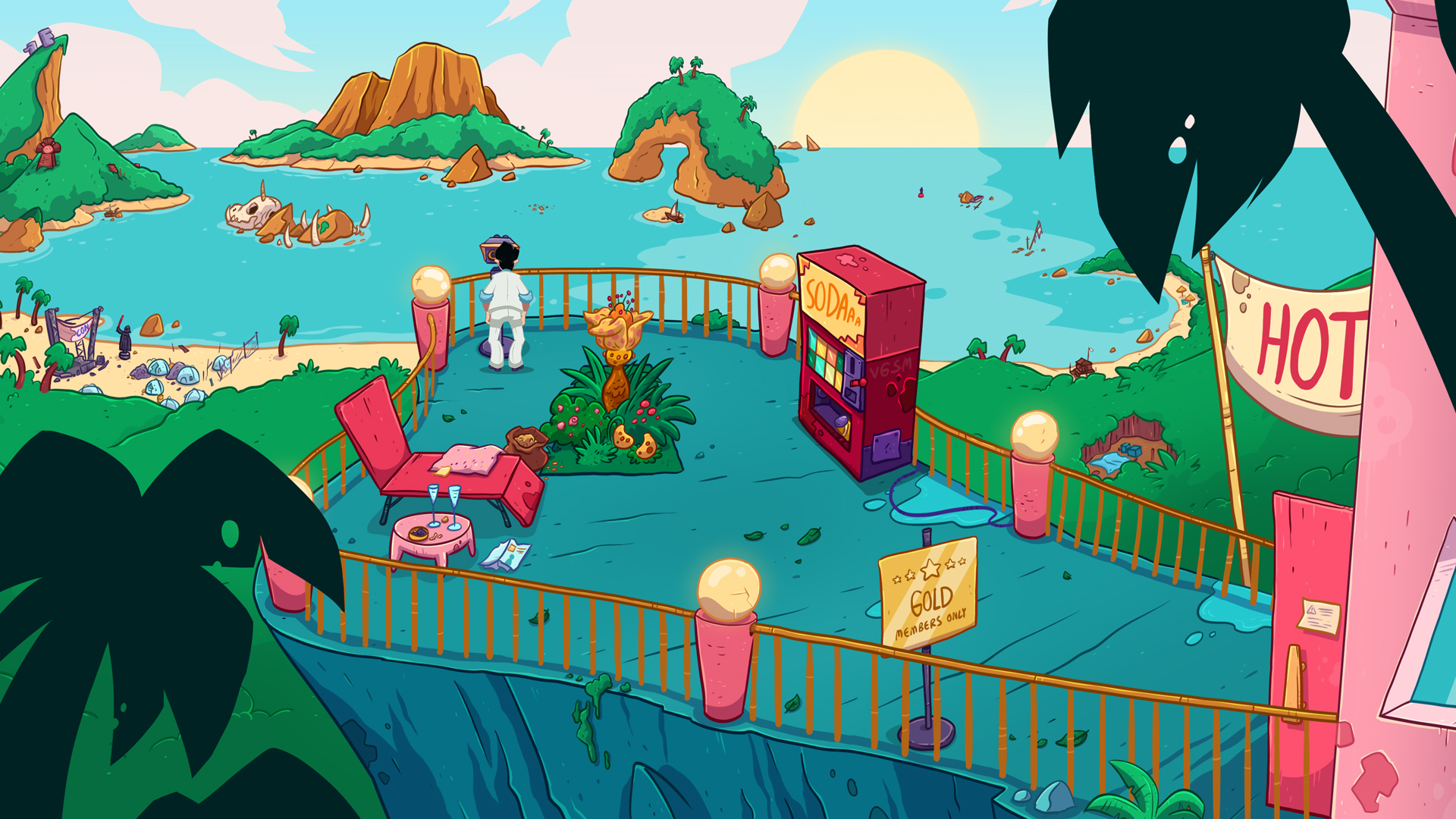 As for the adventure aspect, this game feels more straightforward than Wet Dreams Don’t Dry. Although there are multiple hookups Larry can experience, the fact that Larry is searching for someone that could be his one and only is sort of surprising. Larry Laffer is the last video game character you’d expect to be tied down to just one woman, but there he goes roaming all throughout the seas and evading secret agents and cannibals just so he can get Faith to notice him once more. 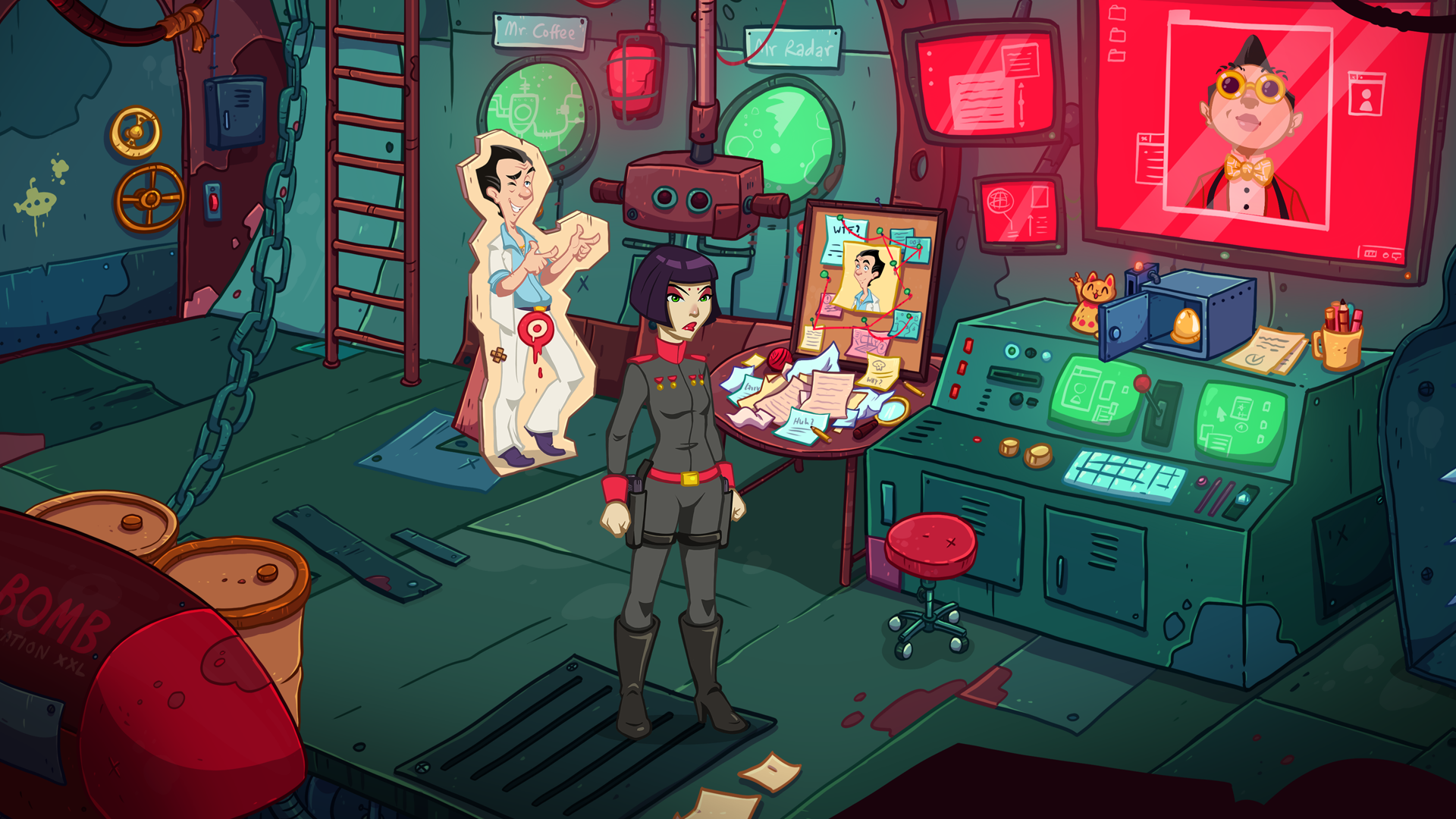 Okay, he does score with a lot of hot girls in this game. You can’t hide this fact from anyone. There’s a certain slime-ball personality that Larry has that’s apparent throughout this current return. However, as the game goes on, he starts maturing in ways that make him a true ladies’ man. A lot of this is thanks to his AI partner Pi, who always finds a way to put Larry in his place when needed. Their banter is the funniest part of the game, and it even reaches touching moments (emotionally, not...you know!) near the game’s climax (again, not that kind!).

There are a lot of puzzles and missions Larry must go on in order to reach Faith, many of which can be big brain teasers. The game is somewhat kind to its players, as it has a checklist of things Larry must do that nudge him in the right direction. But there is a lot of trial-and-error that needs to be conducted, as well as a plethora of listening to the game’s dialogue. It’s easy to pay attention though, as the voice acting is once again pretty terrific, with Jan Rabson voicing Larry with heart & sleaze and Penelope Rawlins delivering a funny-yet-frustrated Pi. 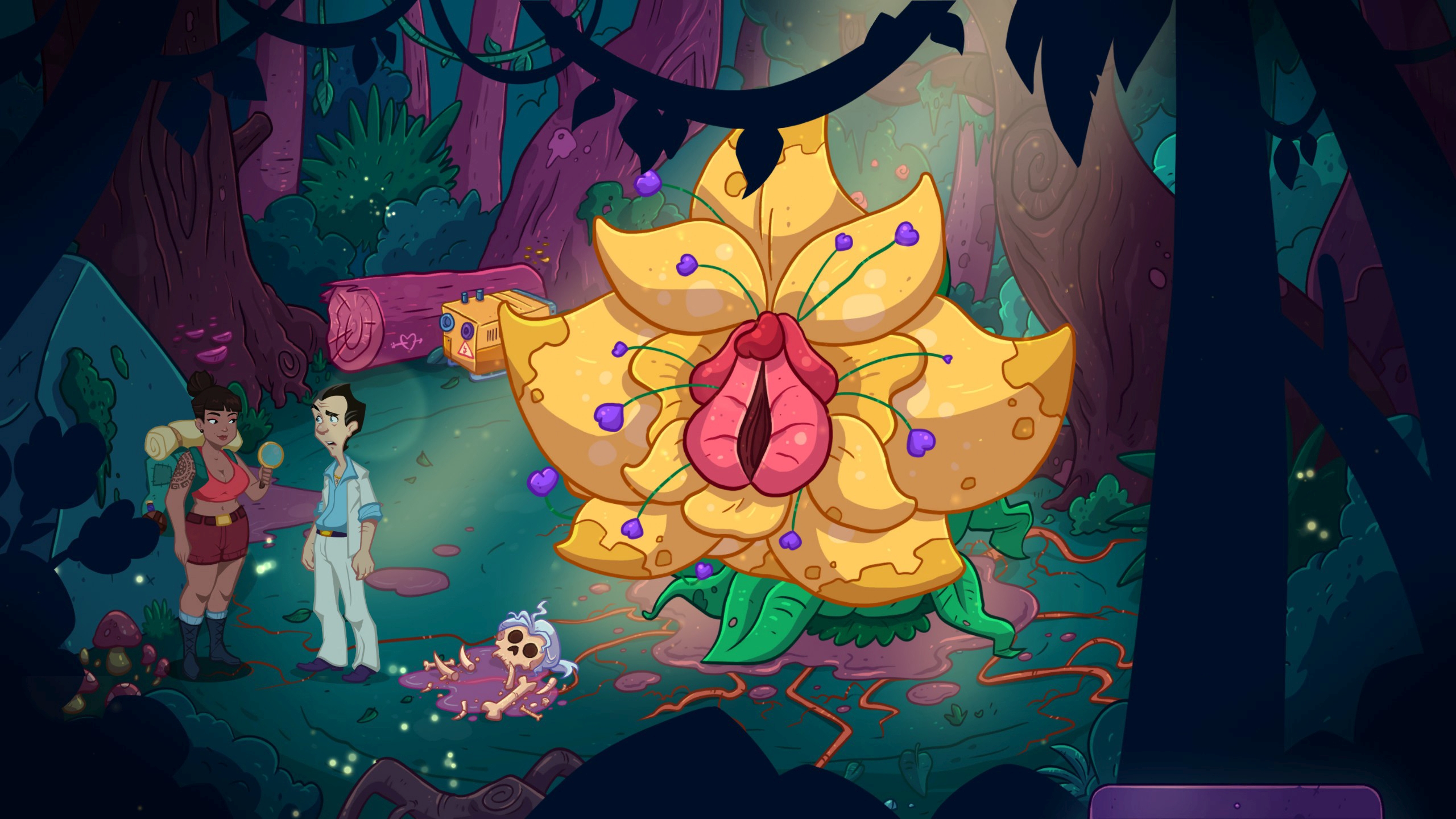 All of this is tied up nicely with its overall narrative. There are some things that’ll raise an eyebrow or two (wouldn’t be Leisure Suit Larry if there wasn’t), but the amount of heart that’s placed in Larry, Faith, and even Pi is more than one would ever expect. Without ruining the entire story, there are legit growing moments that shows a lot of evolution for Larry, in ways that don’t ever betray the character’s roots. Heck, I’ll even say this: I never expected to be given goosebumps by the end of its nine-hour campaign, and yet I felt a legit warmth as the end credits started to roll.

Leisure Suit Larry: Wet Dreams Dry Twice is how a classic point-and-click adventure should evolve. It never takes away the core elements that make Larry Laffer who he is, but it also gives him a lot more depth and heart in ways that not even creator Al Lowe could’ve imagined. Yes, it’s still a filthy video game, but Wet Dreams Dry Twice shows that even naughty romps can have their endearing qualities.

No Borders No Race: The Top Anison...